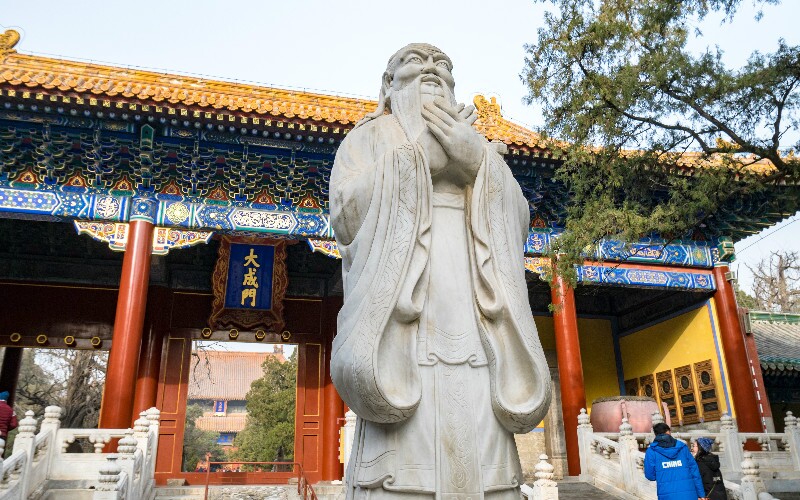 Evidence of the Beixin Culture (5300 BC to 4100 BC), the Dawenkou Culture (4100 BC to 2600 BC) and the Longshan Culture (3000 BC to 2000 BC) was found in Shandong province, which proves that comparatively advanced handcraft industry, agriculture and animal husbandry was prevalent in Shandong 4000 to 7000 years ago. The oldest Chinese inscriptions: Dawenkou Pottery Inscription and Longshan Pottery Inscription; the largest prehistoric settlement found to date: Chengziya (城子崖) Archeological Site; the oldest section of the Great Wall in China: the Wall of the Qi State; and the oldest Oracle Bone Script: Huantai County Oracle Bone Script, were all found in Shandong. According to the research of archaeologists, Shandong was the main place for silk manufacture from the Han Dynasty to the Tang Dynasty, and it was the origin of the ancient Silk Road.

Shandong has been one of the political, economic and cultural centers of China since ancient times. The earliest Chinese dynasty, the Xia Dynasty (about 2146 BC to 1675 BC), exerted control over the western part of Shandong province, while Eastern Shandong was inhabited by the Dongyi peoples who eventually became Han-ized over subsequent centuries. Southwest Shandong was their political and economic center during the early part of the Shang Dynasty (about 1029 BC to 771BC). During the Spring and Autumn Period (770 - 221 BC) the state of Qi at Linzi and the state of Lu at Qufu were the most powerful states existing in Shandong. Since the two states exerted a significant influence on the politics, economy and culture in Chinese history, a common nickname for Shandong is Qilu, after the state of Lu and state of Qi. Its abbreviation is Lu.

The Hometown of Confucius and Mencius

Shandong is the birthplace and the center of Chinese civilization and Shandong culture has felt the influence of Chinese civilization since remote antiquity. It was the hometown of many outstanding ideologists, scientists, politicians, militarists, litterateurs and artists. Among them, the most famous are Confucius, a great thinker, educator, and founder of the Confucian school of thought, and another representative figure of Confucius’ School, Mencius.

Confucius (551 - 479 BC) was a great thinker, educator, and the founder of the Confucian school of thought. He was born in the state of Lu during the Spring and Autumn Period. Benevolence is a key component of his ideas.

Confucius put determined effort towards study and research, and soon became erudite. He set the example of private education and enrolled a lot of students no matter whether they were rich or poor. It is said he had 3000 disciples and 72 of them were excellent ones. Confucius earned the reputation of being the forerunner in the spreading of knowledge. He visited a lot of countries, and compiled ancient documents in his later years. He committed himself to education, collection of famous ancient works such as The Book of History and The Book of Songs, and adaptations of The Spring and Autumn Annals. His students made a record of his thoughts and actions in The Analects of Confucius.

Through strenuous efforts by Confucius and his disciples of later generations, the Confucian School became the mainstream of Chinese culture. Its influence on the thoughts of Chinese has extended more than 2000 years. The core of the system of Confucian Thought is rule with morality. He persistently advocates the moral cultivation of life and society. The highest standard for a society governed with morality is rite, and the highest standard for a morally cultivated life is benevolence. Confucius suggests that we should first behave appropriately if we want to win trust from others, and that we should first satisfy others’ needs if we want to have our expectations fulfilled. He also offers good advice on how to deal with people around us and good philosophy, such as: "Don't do unto others what you don't want others to do unto you". Confucius proposes the harmonization between human being and nature and the idea that "man is an integral part of nature”. He explains why we should be benevolent to other people and friendly with everything on the earth. Confucius insists that a country should be governed with morality so as to create a comfortable life for its people and to educate them. Only in that case would economy and culture reach long term development. Confucius believes that the most developed civilization is one that gives birth to people with sound characters, creates a harmonious social environment and believes "the whole world is one community". With his eminent contribution and wide influence, Confucius is respected as the greatest educator in Chinese history.

Mencius (about 372 - 289 BC), also known as Meng Ke, is a great thinker, educator, and politician in the Warring States Period. He was born in Zou, today's Zouxian County in Shandong Province. Mencius accounts the major thoughts and political activities of Confucius in his life time. Mencius is believed to be the heir of the Confucian School and thus honored as Yasheng, meaning second to Confucius, the Master of Culture.