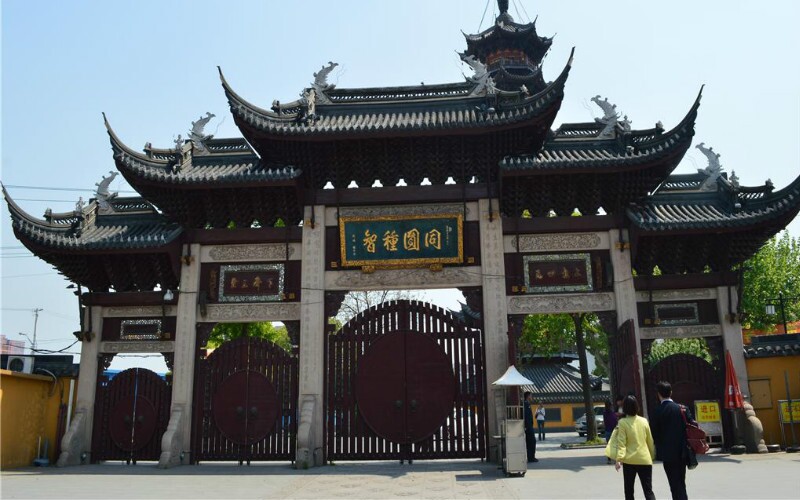 The Longhua Temple is the largest temple in Shanghai, and the pagoda is the only one in Shanghai that existed before modern times. It has a main south to north axis along which five of the buildings are located. The axis is 194 meters or 637 feet long. In order, the five buildings are the Maitreya Hall (Mile Dian), the Emperor of Heaven Hall (Tianwang Dian), the Grand Hall of the Great Sage (Daxiong Baodian), the Three Sages Hall (Sansheng Dian), and the Abbot's Hall (Fangzhang Shi). Along with these, other highlights are a vegetarian restaurant, the temple fair, a side room with 500 golden statues, the Bell and Drum Tower and the Longhua Pagoda.

Bell Tower & Drum Tower: These buildings are off the axis. In the Bell Tower, there is a bronze bell that weighs 3,000 kilograms or 3.3 tons. It was cast in 1894. On the evening of New Year’s Eve on December 31st, it is a tradition to strike the bell 108 times to ring in the year. People can pay about 50 RMB or 7.50 USD to strike it three times. Bell ringing on New Year’s Eve is a common tradition in Buddhist temples that have a bell in East Asia.

The Longhua Pagoda: The 40.4 meter-high Longhua Pagoda is made of brick, and the staircases are made of wood. It is red, has 7 stories, and it looks like a delicate Song-era pagoda. The brick tubular shell of the pagoda is said to have been first built in 977. The wooden staircase and the 7 roofs are said to be of recent construction.

The Longhua Temple is the largest temple in Shanghai.

Room with 500 Golden Statues: Just outside of the main entrance of the third hall called the Daxiong Baodian where there is a big golden sitting Budda statue, there is a side hall where you can see 500 little gold statues arranged in rows. They shine and glitter in the light. From the austere courtyard with the smoke of fires and burning incense, the golden and bright statues are a striking contrast.

Temple Fair: There is a temple fair on the 3rd day of the 3rd month of the lunar calendar. During this time, people can see the peach blossoms. See China Spring Travel Guide

Vegetarian Restaurant: It is common for active Buddhist complexes in China to have a vegetarian restaurant or cafeteria. There is one behind the fourth hall. It serves basic meals between 11 am and 2 pm. See places to eat in Shanghai

The Grand Hall of the Great Sage (Daxiong Baodian): The third hall will probably be the most impressive of the five main halls on the axis. In it, there is a big golden statue of Buddha along with several statues of arhats. Chanting music is played, and people bow and kneel in front of them.

It isn’t clear when a temple was first built in the location, but it is thought that some buildings and the Longhua Padoga were built during the era of the Song Dynasty. The brick tubular shell of the pagoda is said to have been first built in 977. The wooden staircase and the 7 roofs are said to be of recent construction. Most of the current buildings are thought to have been built in the middle to late 19th century during the Qing Dynasty era. There was a major reconstruction effort in 1954. With the help of donations from wealthy Overseas Chinese, a lot of money has been spent for restoration and upkeep, so the whole complex is well refurbished and well decorated.