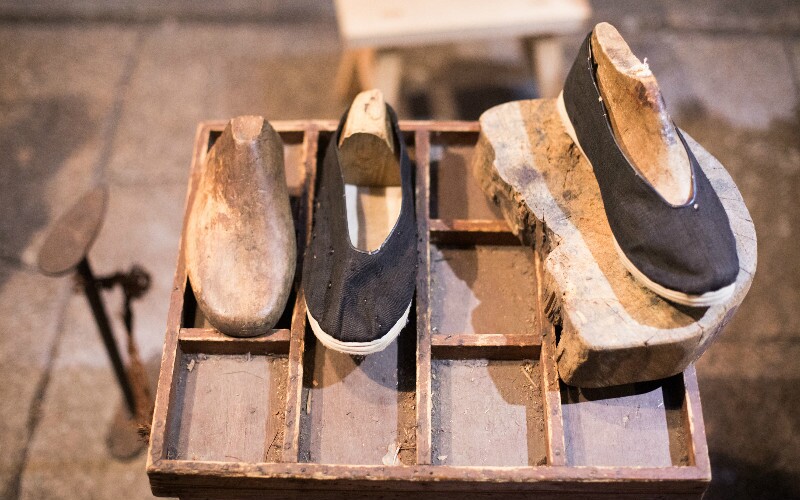 The Shanghai Film Group produces a lot of movies and TV shows shown in China, and they needed historically accurate sets in which to make realistic productions. Old buildings and lots in the Songjiang District in southwestern Shanghai were turned into a media production park that also is a tourist attraction.

In the media production park Shanghai Film Group made various sets. Some sets portray an urban street in China in the 1930s complete with cobblestones and inlaid tram tracks and building fronts. Other sets looks like a mountain scene, a church building, a rural village and buildings in China.

The mockup of Nanjing Road of Shanghai of the 1930s is big and somewhat accurate. There are a real canal, props and cars that look like early 20th century vehicles. People can pose with them and maybe even sit in them for pictures and to playact in their own videos.

A favorite Chinese historical era that is used as a setting for making movies and TV shows is the period of the Japanese occupation and the 1930s and 1940s. A lot of Chinese movies and TV shows are set in this time period. So most of the park is made up to look like the 1930s and 1940s. You can probably watch actors dressed up like Japanese in their screen takes or acting in battle scenes.

It is like Universal Studios in California, but it is a lot less ritzy and a lot less like an amusement park. Tourists can walk around on the sets and watch productions being shot, and they can also playact and pose in the sets.

A lot of people like to take pictures and make videos with their cameras and cell phones. They pose and playact. Imagine surprising your friends with a picture of yourself dressed like a mockup and pulling your friend in a rickshaw or talking on the phone in an old-style phone booth! Tourists are fairly free to have fun in the various sets.

Attractions in the Shanghai Film park include wax figures of famous actors in China's film industry such as Zhou Xuan, Ruan Lingyu, Shangguan Yunzhu, and Gong Li. There are memorabilia and displays about famous Chinese movies. There are studios and stages.

And if you like martial arts movies, actors perform martial arts shows at the Lotte Tea House set at 10:30 and 2:00 pm each day. Tourists might even be able to join in the show.

The Park's Size and Quiet Areas

The Shanghai Film Park is quite big with a lot of different old sets and unused areas. But most of the visitors stay around the Nanjing Road set area. So if you want, you might be able to wander around by yourself without anyone watching. If you don't like crowds, one of the best things about the park is its relative emptiness.

People are free to go wherever they want. With so few other visitors walking around, it is a surreal and maybe even eerie experience to walk around in the sets. As you wander around the empty streets, you might feel like you're the only one left after the apocalypse.

Some of the sets look so real that you might feel like you are in an actual city and have the naughty feeling of trespassing. Then you can look around in the back or enter buildings and see what is fake and what isn't.

It is said that the Shanghai Film Park is difficult for foreign tourists to find because there isn't a lot of English-language information available about it. It is said that the Google map wasn't very accurate either. So here is the address and the GPS coordinates.

The whole trip from central Shanghai takes about an hour and a half if you first take Subway Line 9 to the end of the line in Songjiang District and then take a bus. The subway terminal is about 15 kilometers northwest of the park.

You can add a visit to Shanghai Film Park to one of our Shanghai Tour Packages. Contact us for a customized tour.