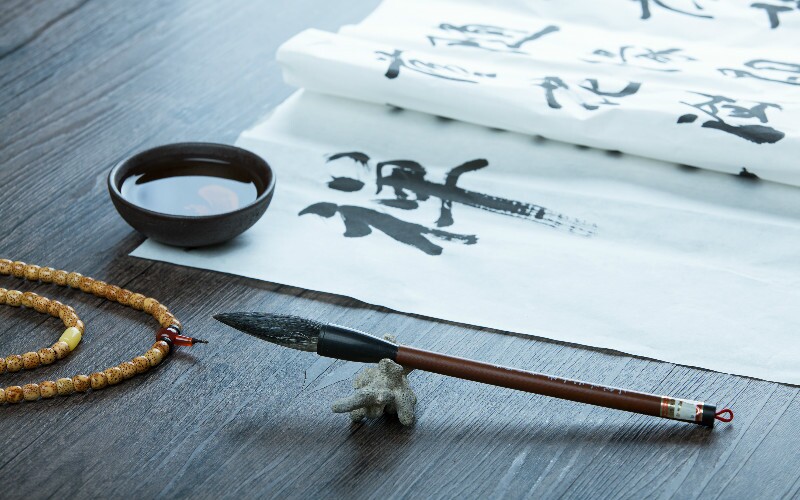 Shanghai Museum of Pen and Ink

Chinese litarary writing, caligraphy art and Chinese painting were the province of the wealthy, the officials or those supported by them. The writers and artists wrote and painted with writing implements such as brushes and pointed pens that they dipped in ink. At the Shanghai Museum of Pen and Ink in Shanghai’s Huangpu district, you can not only see displays of art and writing utensils of past dynastic eras but also be instructed on masterpieces of various styles of ancient art and calligraphy.

In ancient China, cultured writing, painting and calligraphy were highly appreciated arts. Since writing the language was so difficult, basically only those with a lot of leisure such as officials of the empires or the wealthy could write cultured prose in the complex literary language. The literary language developed over a two thousand year period after the Qin Dynasty imposed an imperial literary language on their territory. Art and calligraphy art were also mainly engaged in by the wealthy or political officials. At the museum, you can see materials that were sold in common pen and ink shops before the 20th century, writing and art utensils, multimedia exhibits, and examples of masterpieces of ancient artistic writing and artwork.

Introduction to the Exhibits

There are exhibits of pens. Shanghai once had a school of Chinese art that was very important in the Qing Empire and the beginning of the 20th Century. In the 18th and 19th centuries, Shanghai became a leading commercial city of the Qing era. Some of the wealthy merchants became patrons of the arts, and they encouraged artists to produce work of bold new styles. You can see examples of utensils from that time in Shanghai’s past. There is one kind of pen with a brush that was 10 centimeters or 4 inches long that was once used by some of those of the Shanghai school.

Along with displays of writing and painting implements, people can see examples of ancient art. Some old works are more recent. For example, you can see pieces finished by Zengxi who was a leading figure of the Shanghai school near the end of the Qing era (1644 - 1911). There are also much older pieces of art in the museum. For example, there are very valuable pieces of art that were drawn by Wang Xizhi who lived in the 4th century AD. His most famous work is the “LantingXu.”

China Highlights can help you customize a tour to Shanghai Museum of Pen and Ink and other highlights in Shanghai.

Address: No. 429 Fuzhou Road, Huangpu District of Shanghai. 黄浦区福州路429号. You can show the address to a taxi driver.