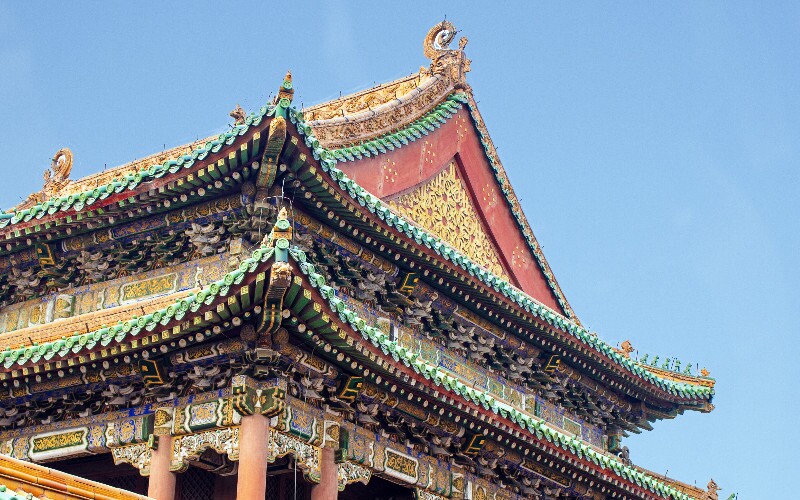 Four towers were originally built around Shenyang in 1643 by the early Manchu rulers just before they conquered Beijing and transferred their capital to there. It is thought that the old towers were identical Buddhist stupas. The north, south, and east towers are at least somewhat original. The western tower was recently rebuilt. At the north tower, you can also see the Falun Temple that was built next to its tower.

In the early 1600s, the Manchu rulers wanted to expand their kingdom. They conquered Shenyang, and in 1625, the Manchu ruler Nurhaci made Shenyang his capital. A large imperial palace was built in the city, and in 1643, just before the Manchus invaded the Ming Empire, four towers and temples were built at four sides of the city’s wall. They were located outside the walls. The four stupa towers are remnants of the imperial buildings of the former capital city; these sites are called: East Pagoda/Yongguang Temple, South Pagoda/Guangci Temple, West Pagoda/Yanshou Temple, and North Pagoda/Falun Temple.

The Manchu rulers expanded their army by incorporating Mongolian cavalry under their banner. With the help of a Ming general, they passed the Great Wall and conquered Beijing in 1644. Beijing then became the new capital city of the Manchu empire that was called the Qing Empire (1644-1911). But in the early Qing era, it was still an important city for the Manchu rulers where they kept some of their treasures.

The eastern, southern, and northern stupas were rebuilt in the 1990s. The western stupa was destroyed in 1968. When people dug under it, they uncovered a lot of historically important artifacts in a hidden room. In 1998, the western stupa and the Yanshou Temple were built. To read more information on Qing Dynasty

The four stupas were probably built to be identical. They were about 26 meters or 85 feet tall. The northern stupa and the Falun Temple are well preserved. The temples of the east and south stupas were destroyed. At the north stupa, there are steles and monuments that you can see. The western stupa and the Yanshou Temple were rebuilt in 1998.

The Yanshou Temple and the stupa are next to apartment buildings. The stupa is a white dome-like structure with a green opening. It sits behind the temple. It is 26 meters or 85 feet tall. The temple is a small red building with red pillars. It has an open doorway, and you can see all the way through it to see the stupa behind it.

China Highlights can help you customize a tour to visit this tower and other highlights in Shenyang.