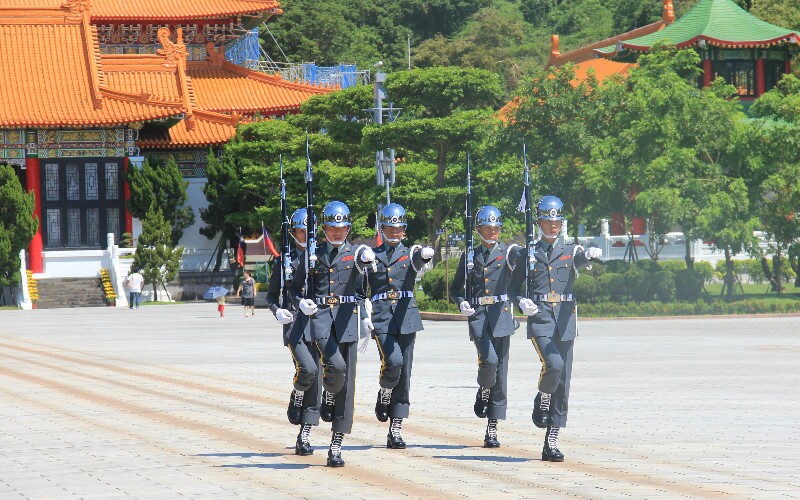 The National Revolutionary Martyrs' Shrine is a must see attraction for all visitors to Taiwan interested in fine architecture and scenery, Chinese history and war monuments, and the dramatic ceremony of the changing of the honor guard at the shrine.

The shrine was built to honor about 390,000 Chinese soldiers who died during the War of Resistance against Japan, the Civil War between Nationalist and Communist China, and the First and Second Taiwan Strait Crises.

Importance of the Shrine

The Martyrs' Shrine is a revered monument to China's war dead. Many people come each year to pay their respects to these war heroes. Every March 29th (Youth Day) and September 3rd (Armed Forces Day), the President of Taiwan and the heads of the branches of Taiwan's government honor the martyrs by offering incense at the shrine and bowing.

Architecture and Scenery of the Shrine

The shrine is an important tourist attraction for anyone. Those interested in history and architecture will be impressed by the striking and serene building, recalling the Ming Dynasty style of the Taihe Dian Imperial Palace in Beijing.

The building houses the spirit tablets of the fallen heroes, a traditional way for East Asian cultures to venerate an honored ancestor or deity. The shrine has plaques explaining the history of Taiwan during World War II and the Civil War with Communist China.

The structure was established in 1969 in Taipei City, Taiwan, as a lasting dedication to the war dead of the Republic of China. The design itself is meant to symbolize the courageous spirit of the martyrs.

The location of the shrine is also very peaceful, with the slopes of the Chingshan Mountain in the background and the Keelung River in the front. It is surrounded by about 33,000 square meters of grass land. The peaceful setting invites quiet reflection and honoring of the dead.

What makes a visit to The National Revolutionary Martyrs' Shrine most memorable is the changing of the honor guard every hour. The ceremonial changing of the guard attracts a large audience. The slow and solemn 30 minute ceremony is marked by incredible military precision.

The military officers of the guard undergo extensive training. Once a shift is changed, the soldiers stand solemn and still before the shrine until they are replaced in the next hour. The ceremony instills in visitors a sense of honor for the monument and the guards who protect it.

The address of the Martyrs' Shrine is 138 Beian Road, Zhongshan District, Taipei City. It is located just east of the Grand Hotel and is approximately a five-minute walk from that hotel.

For MRT, take the Danshui Line to Yuanshan MRT Station and then transfer to bus route 267, 646 to Martyrs' Shrine. For car, drive on Zhongshan North Rd toward Beian Rd until the roundabout.

It is best to visit the shrine so as to catch the changing of the guard. This ceremony occurs on the hour between 9:00 in the morning and 4:00 in the afternoon. There is no fee for visitors.

Be advised that there is no real shade in the shrine area so sunscreen and a bottle with water are important during the warm weather months. An umbrella is always a good idea to carry for shade and in case of rain.

Photographs of the guards may be taken when the ceremony is completed and the guards are standing still.

Visitors are encouraged to stay at one of several nearby hotels and enjoy more scenic spots in the area such as the Shilin Night Market and the Taipei Fine Arts Museum.