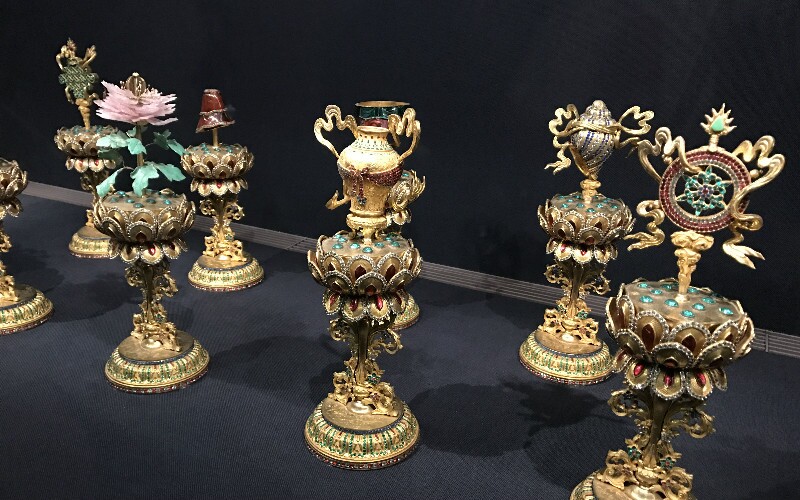 The National Palace Museum located in Taipei City, a suburb of Waishuangxi, is a fascinating view of antiquities of all kinds including paintings, rare documents and books, ceramics, curios, bronzes, jades, and much more.

There are permanent and temporary special exhibitions as well as a Children's Gallery and the Zhide Garden with its traditional architecture and landscaping, both with free admission.

Begin at the Orientation Gallery in the main building's west wing to obtain information on the exhibitions and history before visiting the various galleries.

The Magic of Kneaded Clay: A History of Chinese Ceramics features mostly ceramics inherited from the Qing imperial palaces with accession numbers to give the original location of each piece.

Splendors of Ch'ing Furniture shows Chinese furniture between the 15th and 18th century. In the latter century, imperial demands caused the style to be more majestic, opulent and luxurious. Accurate reconstruction of the rooms is accomplished by adding imperial paintings and other objects from the periods.

Lifting the Spirit and Body: The Art and Culture of Snuff is a display of unique craftsmanship of snuff bottles and boxes as well as paraphernalia from the Qing court, which followed the European fashion of snuff.

Some of the Amazing Ceramics and Curios The ceramics include a High-stemmed Black Pottery Cup, Bowl in Shape of Lotus, and a Blue Enamel Landscape Teapot. The curios include a Filigree Cloisonne Box with Lotus Motif, Filled Lacquered Peony Box, Painted Enamelware Vase with Dragons, and Glass Snuff Bottle with Interior Painting. These are just examples of the spectacular objects that you can view and enjoy.

There are three gift shops and a variety of places to dine including both Western and Eastern snacks, desserts, a Teahouse, and the Silks Palace covering five stories of the building and offering Taiwanese snacks and traditional Chinese cuisine.