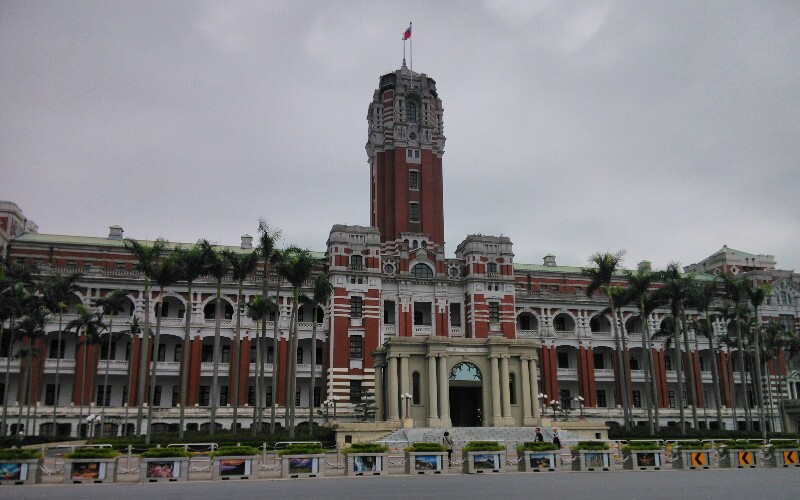 Almost a quarter of a million square meters in size, Presidential Square is a spacious expanse of quarried stone blocks framed with lush gardens and exquisite, pagoda-style buildings dedicated to theater and music. It is also the site used by the president for the ceremonial greeting of foreign visitors. Festivals, parades, concerts, and ceremonies regularly take place in this iconic and beautiful location.

The most famous of these festivals, the Lunar New Year celebration called the Lantern Festival, offers visitors an awe-inspiring display of lanterns and lasers lasting several days.

Even on days when no formal celebration is planned, the square is filled with lively activity. The parks form a natural backdrop where impromptu sessions of martial arts such as tai chi are practiced. The soothing natural beauty of the flowers and koi-filled ponds provide a calming contrast to the bustling city.

To the east is the National Chiang Kai-shek Memorial Hall, dedicated to the memory of President Chiang Kai-shek and built in a modern pagoda style with the colors white, red and blue echoing the Republic of China flag. The monument has 89 steps, one for each year of Chiang Kai-shek’s life. Inside, the Chinese characters for democracy, science and ethics are painted on the walls surrounding a statue of Chiang Kai-shek in traditional Chinese dress.

On the western end of the square, the ornamental main gate towers several stories and provides a stunning focal point with its white walls and deep blue pagoda roof. The gate bears the words "Liberty Square" in modern Chinese script, a phrase added in 2006.

The National Theater Hall and the National Concert Hall frame the north and south sides of the square. Similar in design, their brightly painted columns and pagoda roofs give a dramatic beauty to the square and are the site of some of the finest performances within Taiwan.

The square was designed by famous architect Yeng Cho-cheng in the early 1970s as a tribute to the esteemed Chiang Kai-shek, president of the Republic of China. The square first opened in 1975, the year of Chiang Kai-shek's death. The Presidential Office Building overlooks the square and its proximity lends itself to many ceremonial government functions.

Almost immediately upon completion, the square became the natural site for public gatherings and demonstrations. Many pro-democracy demonstrations and student movements during the 1980s and '90s led to Taiwan's first popular elections in the late 1990s. This link to greater freedom led to the square receiving an alternate name in 2006, Liberty Square.

The Chiang Kai Shek International Airport is the closest airport servicing Taipei. Buses and high-speed rail trains carry passengers from the airport to any location within Taipei.

As well, Taipei has a mass transit metro system with regular stops to sites around the city. One stop on the Xindian line lies directly at the Chiang Kai-Shek Memorial, on the eastern end of Presidential Square.

Presidential Square lies in the heart of Taipei and is close to many other attractions, such as the stunning Longshan Temple, as well as restaurants, entertainment and shopping venues.