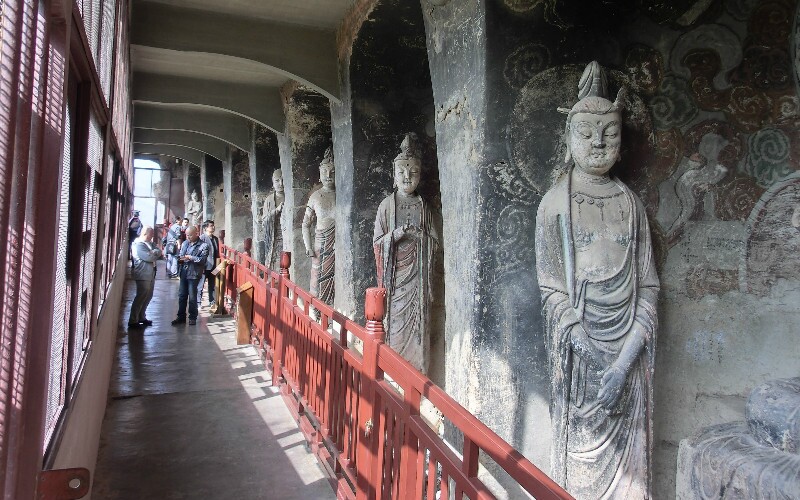 The name Tianshui was in the beautiful legend: "Tianhe River Infusion." Of all the names used for this city, Tianshui is its oldest name. The legend goes like this. Over 3000 years ago, the Tianshui area had a dense population and a large number of buildings, and "elegant mountains and rivers and extremely thick forests were in the area." However, due to continuous wars and successive years of drought in the late Qin Dynasty and the early Han Dynasty period, the fertile and prosperous land fell into ruins, and people lived in an earthly hell. One night when people were falling asleep, it was said, gale force winds were howling with thunder and lightening, and a golden light shone in the sky, and a red light appeared on earth. At the same time, the land started quaking and splitting. Then the water of the Tianhe River began to pour from the sky into the big seam, and a lake came into being. People called it "Tianshui Lake." The water level kept constant and the water remained pure and transparent, sweet and mellow. "Never running dry in spring or overflowing in summer and never turbid all year around." It was believed that the lake was connected with the Tianhe River, and therefore it was nicknamed "Tianshui Well." Later, the legend was heard by Emperor Wu Di of the Han Dynasty who ordered that a new county should be founded beside the lake with a name of "Tianshui County." This is how the city was named Tianshui.

Tianshui was founded in the Han Dynasty, and it has long been a significant county in the northwestern part of ancient China. The Flourishing Kaiyuan Reign Period in the Tang Dynasty was when Tianshui was a key way station on the way to Chang’an.". According to "Daci’en Temple Sanzang Rabbi Biography," the eminent Monk Xuan Zang of the Tang Dynasty once "passed through Qinzhou county and spent a night" on his way to India to obtain Buddhist scriptures. Up till now, many folk stories about Sanzang Rabbi obtaining Buddhist scriptures have been circulating in Tianshui. Four years after the Turmoil of Anshi in the Tang Dynasty, the reputable poet, Dufu, gave up his official life and arrived at Tianshui with his family in order to escape from the turmoil.

Tianshui was on the Northern Silk Road that was a very old trade trail between Chinese kingdoms and central Asia. Traders plying this route brought goods and ideas from as far away as Europe, and armies and religious teachers walked this route. On the road came traders with dates, saffron powder and pistachio nuts from Persia; sandalwood from India, glass bottles from Egypt, and other expensive and desirable goods from other parts of the world. The area has a long history.