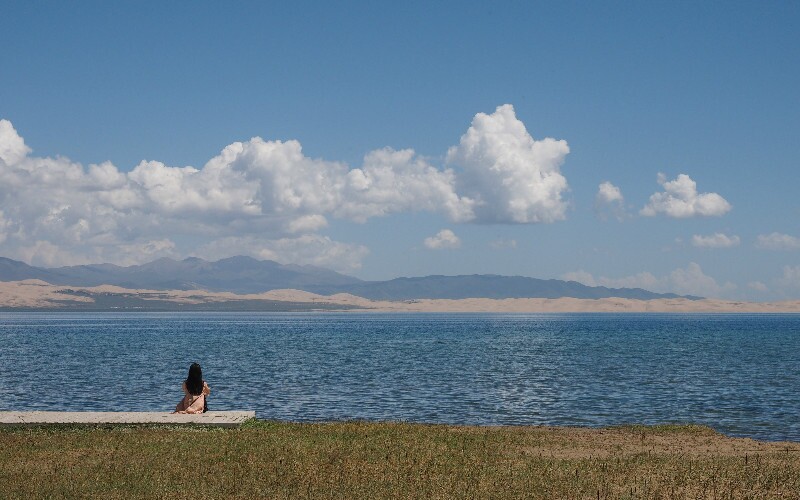 Tongren Old Town is the one of the oldest and best-preserved ancient towns in Qinghai Province. Over six ethnic groups, including Han , Hui, Tibet, Sala, Dongxiang and Bao live in the old town. Buildings in the old town are simple in style and they were constructed according to the rise and fall of the terrain, which forms a tiered building complex. Three temples: Longwu Temple, Yuantong Temple, and the Mosque, which represent Tibetan Buddhism, Han Buddhism and Muslim, are located on the same street. Their harmonious coexistence goes a long way towards proving the blending and unification of different ethnic groups and cultures can be successful, which constitutes a very rare geo-cultural phenomenon.

Tongren is the birth place of the Regong art. Each year, in the sixth month according to the Tibetan calendar, the Tibetan, Tu and Mongolian ethnic groups from the surrounding villages will gather in Tongren for the June Singing and Dancing Festival, which is referred to as "Zhou lei Bei Rou" by the local dialect.  In the event, a lot of cultural activities are presented.

Famous for thangkas and painted statues, the Regong Art has attracted visitors from all over the world. Regong art is a highly Tibetan Buddhist tinted folk art that mostly involves the painting and sculpting of Buddhist figures. It has been in existence for seven hundred years. If you want to have a quintessential taste of Tibetan culture, this is the right place to come.

Each day, there are a number of flights heading for Tongren Daxing Airport from cities like Guiyang, Chongqing, Guangzhou, Shenzhen and many other places. Daxing Airport is situated in Daxing Town, Songtao County, Tongren Prefecture. It takes no more than half an hour to go to Tongren city from Daxing Airport by bus. With the arrival of each flight, there will be airport buses to send travelers to the Tongren city area. You are only required to tell the bus driver your specific stop when you want to get off the bus. The ticket fare for the airport bus is 10 yuan.

From Guiyang to Tongren, you can not only take the tourist train to go there directly, but can also transfer from Yuping. Travelers from Beijing, Shanghai and Guangzhou can first take a train to Huaihua, and then travel by car to arrive in Tongren. Travelers from Chongqing can also first take the boat along the Wujiang River, stop at the Guizhou Yan River, and then transfer to a bus to Tongren.
Tongren Railway Station is located in Qiantang, which is also the location of Tongren Normal University.

Tongren is located in the slope transition zone of Yunnan-Guizhou Plateau between the hilly area of western Hunan Province and the Sichuan Basin area. The rainfall is abundant in Tongren, and the annual average temperature here is 13 ℃ to 17.5 ℃. Because of its location at a low latitude, Tongren is the hottest area in Guizhou Province, with the highest temperature in summer reaching up to 42.5℃ , much higher than other cities in Guizhou Province. In fact, Tongren's hot temperatures in summer matched those of Nanjing, Wuhan and Chongqing, each of which are commonly called the "Stove Metropolis"of China.