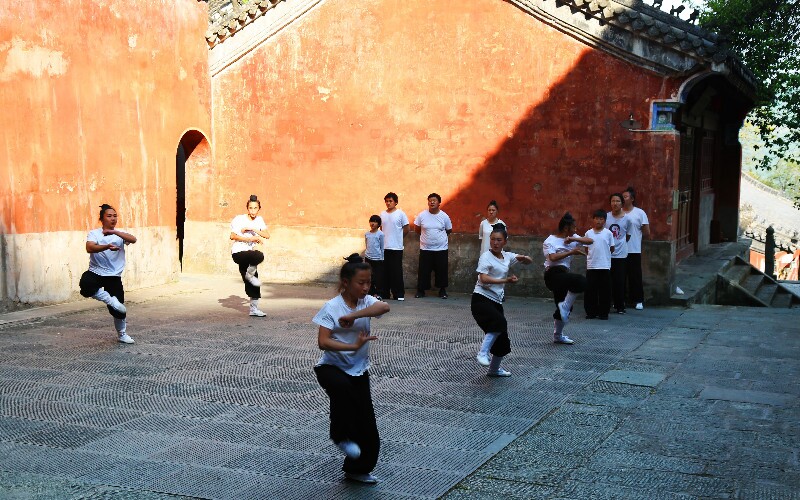 Journey into the mystery and exotica of the Middle Kingdom's incredible and often misunderstood world of kung fu. From tai chi to the Shaolin Temple, expand your body and mind, absorb the sights and incense, and relive the history of kung fu in hundred-year-old monasteries. Relish in the visual and acoustic spectacle that is martial arts performance. And practice kungfu for yourself in this once in a lifetime experience and adventure.

Contrary to popular belief not all forms of martial arts are for self-defense. Tai chi is one such martial art where the focus is maintaining proper blood circulation and repository function; so prepare to fight for your health.

The style of tai chi has an elegance and mystique that promotes healthy living. Tai chi is a low-impact, weight bearing aerobic exercise that is still soothing and pacific in its movement. Thus it's a martial art that is accessible to young and old alike.

For the more dedicated tai chi enthusiast, the SCIC training center in Beijing offers training in the study of tai chi, along with their cultural studies, educational tours and affordable accommodation. In a few weeks time you will be adept enough to bring your new martial art skill back home and practice on your own. And with SCIC locations in Beijing, Shanghai and Henan it's accessible to tours both north and south.

While the economic miracle has drained the study of ancient martial arts out of many cities, in Dengfeng county, Zhengzhou, kungfu thrives. Home of the legendary Shaolin Temple and with a whopping ten percent foreign student count, it's not just China's kung fu capital but the world's epicenter for martial arts training.

Made famous in countless Jet Li and Jackie Chan films, the Shaolin Monastery doesn't let down. The ancient sites of the temple remains intact and photo op friendly for the typical tourist. But beyond this, the center has evolved over the years and now multiple training centers orbit the main monastery.

In past eras foreigners were not allowed to train at the Shaolin temple. Take advantage of the privilege of the present: study five-style fist kungfu, qigong or any other variety of kungfu styles from the masters of martial arts.

Of all the Chinese martial arts styles, Wing Chun is the fastest growing and perhaps most effective self-defense method. Popular with MMA and UFC stars, this fighting method trains students in both staying healthy and protecting themselves when necessary.

When traversing the southern provinces of China: Guangdong and Fujian in particular, attend the Foshan Wing Chun School. Master Lun Gai teaches the short, quick movements that epitomize this style. Foshan City is the home of Wing Chun and the IP Man, portrayed in countless films by Donnie Yen.

Kungfu isn't just a physical endeavor but also a spiritual one. Meditation kungfu is practiced throughout China but Tibetan Buddhist meditation techniques stand out among other. Immerse yourself in the history of kungfu practices. The journey through the ancient Lhasa landscape is reason enough to take the journey, abound with trinkets and souvenirs not found in most other regions in China. Tibet is perhaps the most unique province of China.

Meditative kungfu in Tibet has been described as transcendent. Those who practice the meditation can reach these states within days under the training of the numerous Buddhist masters within the Tibetan capital Lhasa. Living close to the Earth, herbal medicine are added to the meditation regiment to bring one's mind and body in sync.

Kicking Back — Discover Kungfu for Yourself

Even with everything stated above, nothing on Earth could prepare visitors for The Kungfu Tour (a week at the Shaolin Temple) — it has to be experienced.

Most go hoping to emulate some movie cliche but return with renewed body and mind. Go back home not just well rested but also well trained. The experience of a lifetime awaits. You can contact us for a personalized tour of China to discover kungfu.