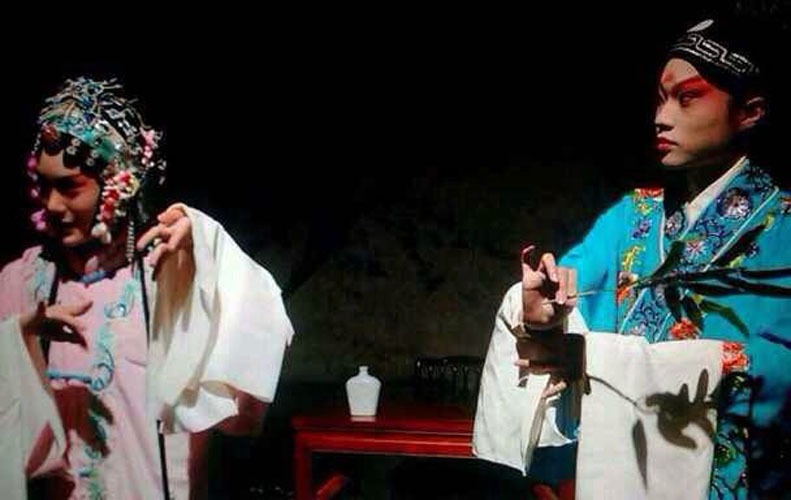 The Fifteen Strings of Copper

-This is a Kunqü Opera story. A traditional play.

One night a shop-keeper, YOU Hu-Lu, went home drunk after meeting his friends in a pub. He brought with him fifteen strings of coppers which were the debt he just had collected. When asked where the money came from he made fun of his young wife by telling her that he had sold her to someone. His wife got frightened, escaped to her parents for help when YOU fell sleep on the table, and left the door open and the lamp on. At midnight, a gambler, LOU A-Shu, dying for money sneaked in. YOU waked up when LOU was about to steal his coppers. LOU killed YOU and took his money.

The next day, YOU's neighbors and friends found YOU dead in his home/shop and his wife was absent. So they chased all the way to the direction of YOU's parents-in-law's. YOU's in-laws lived in a distant village. In the old time the feet of Chinese ladies were fiercely wrapped to keep small since their childhood, and thus they could not run or walk quickly. By noon YOU's wife was still in half-way. The hot sun made her exhausted and sweaty. So she took a rest at the roadside. A young man came up going in the same direction as she did. After exchanging a few words, they found they were aiming for the same destination. The young man helped her and they went together.

YOU's friends caught up with them. They accused the two adultery and murdered YOU. The young man happened to have fifteen strings of coppers with him. The two were brought to the court and then were sentenced to death. The death penalty had to be approved by the top legal administration of the State. While waiting for the execution, somehow LOU's crime was discovered. Finally, LOU was executed and the two innocents got they freedom.