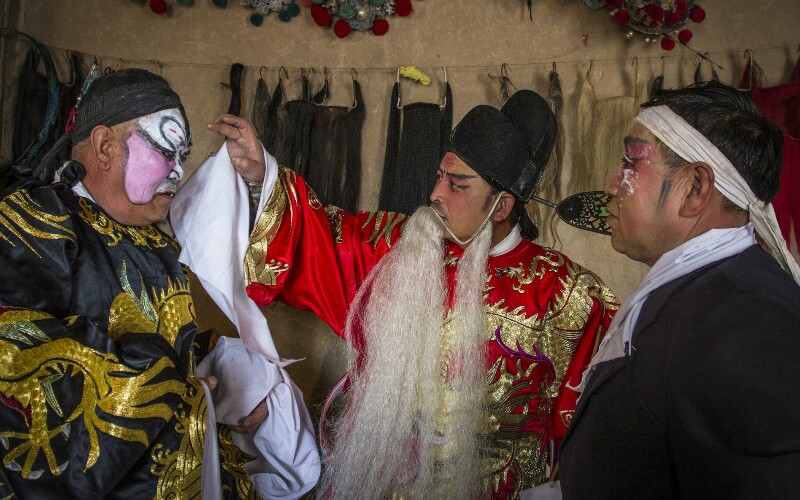 The Orphan of the Zhao Family

Historical story. This play was written after the founding of the people's republic. It was based on a traditional Beijing Opera play "Hunting the orphan, saving the orphan" and a play in Shaanxi Opera (Qing3 Qiang1) "Orphan of Zhao Family". The main characters include three of the four Beijing Opera character categories.

Jin State Emperor favored assistant Tu An-Ku, who built the emperor a luxury garden with a tower. On the completion of the garden, the Emperor arranged a banquet to enjoy himself on the towers, which can overview the capital. Tu suggested a game to please the Emperor. They slingshot the people under their view. Whoever hit the head won, or would be "punished" to drink liquor. Prime Minister Zhao Dong came to persuade the Emperor not doing so to lose his subjects' support and criticized Tu on his wrong do.

Tu hated Zhao and ordered one of his servants to assassinate Zhao. The assassin was deeply moved by Zhao's loyalty to the Emperor when he was about to act, and cut his own throat. Zhao presented the incident to the Emperor. Tu and Zhao criticized each other over the incident. The Emperor said he had a dog, a tribute by a foreign state, which could distinguish bad assistant from the good. The dog bit Zhao. Zhao ran out for life. Tu suggested the Emperor to kill Zhao's family.

All Zhao's family members and servants of a total 300 people were killed. Zhao's daughter-in-law, Princess Zhuang_Ji, was the sister of the Emperor, who was excluded from the massacre and ordered to move into a palace. The Princess was pregnant and her child was to be killed when the birth was given. In order to save the blood of Zhao, the Princess figured out a solution with one of Zhao's friends, Cheng Yin.

Upon the birth of her son, the Princess made a public call that she caught a disease that required a doctor with specific skills. Cheng came to answer the call and was allowed to go into the palace, which was guarded by militia under Tu's command. Cheng hid the sleeping orphan in his medical box when he went out the palace. The guard found the baby but did not like the only descendent of a good man to be killed. So he let Cheng leave and killed himself.

Cheng reported to Tu so that Cheng's own son and Gong-Sun were killed by Tu. To protect the orphan more efficiently, Cheng asked Tu to take the orphan as his adoptive son. Cheng did not tell anyone about the truth. Even the Princess thought he did give out the orphan.

Fifteen years later. The orphan became a well-educated young man with excellent martial skills. The Emperor had died and new emperor went to the throne. General Wei Jiang, after fifteen years of guarding the state border, came back capital. Learning the tragedy of Zhao's family and the orphan, he invited Cheng to his home. The General pretended to ask Cheng to send good words to Tu for him. Cheng did not response positively. The General got very angry, criticized Cheng's betray of friends and slashed Cheng heavily. Cheng then dared to speak out the truth. The General apologized to Cheng. And they agreed on a way to catch Tu.

Cheng drew cartoons of the happening fifteen years ago. He was in tear for his own son and the misunderstanding to him of such a long time. The orphan, Cheng Wu (Zhao Wu), was shown the cartoons and learned who he was. Cheng set a banquet for Tu. When Tu arrived, he found the General and the Princess were there, too. Tu ordered the orphan, his adoptive son, to arrest the General and the Princess. The orphan told Tu the truth and killed Tu.