The Top 10 Zoos and Safari Parks in China 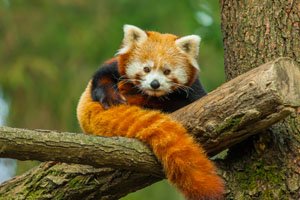 Red pandas, like many other animals, are rarely seen in the wild, but you can see them in China's zoos.

China's large cities have huge and well-stocked zoos and safari parks with good facilities. They can provide a welcome addition to your China itinerary. Conveniently close to the cities, they can be seen in a few hours or for a day trip.

These 10 safari parks, zoos, and animal breeding stations are China's best in their class and most suitable for foreign travelers.

We know that many tourists are concerned about the living conditions of animals in captivity in China. Generally, conditions are improving at most zoos, and the ones we've chosen here are among the most humane. They are set in China's more prosperous and modern cities so they have the best of China's facilities, entertainment, and animal displays.

The Biggest and Best-Stocked Animal Parks in China

These are convenient for tourists since most of them are in or close to China’s most modern cities that have convenient mass transit. Most of these places are right next to a metro station.

Some of China's new safari parks and zoos are already among the biggest and best stocked in the world. Two safari parks are so big that they have their own transport systems, and they are designed to really make it feel like YOU ARE THERE in a real jungle or savannah. Or at least they make a good try to this effect with some added imagination on your part! Chimelong has the best safari park in China all around, and it is among the biggest with 800 hectares (2,000 acres) stocked with 20,000 animals of 500 species. Even more thousands of animals are in other parts of the theme park such as Swan Lake.

They breed many rare animals such as pandas, pygmy hippos, and Siberian tigers. Guangzhou is blessed with nicer subtropical weather and no snow, so the big trees hang with real moss, and they really make it reminiscent of an African jungle. A gondola goes high over the big trees looking down on an African jungle with herds of giraffes, elephants and other big animals.

You can see groups of rhinos, a lion pack, white tigers roaming, camels mulling, leopards lazing in the trees, and other wild and special sights. Another big gondola tram flies over Swan Lake that has 1000s of birds such as swans, ducks, and pelicans in galore in a beautiful real pond setting.

Shanghai Wild Animal Park is 153 hectares in size (378 acres). About 10,000 animals of 200 species live there. There are two main sections where you can see animals. One is an open space where buses go on roads to bring people to see various species of big animals, and the other is a section with animals in pens.

In the safari ride area, people can feed the big cats, bears and other large animals from around the world through the bars of park buses. This is probably not an experience for little children since the animals jump up to get the food and scare people. However, because of the smaller area and tall buildings round about, it doesn't look like a natural jungle or safari.

The pens in the walk through area are fairly big and landscaped. Children love to watch the animal circus where with highly trained animals and acrobatics perform.

The China Ledu Wildlife Zoo has been called "the most dangerous zoo in the world". What makes it seem unusually scary is that the humans are put in cages, and the animals come up to watch them.

It is popular for many who want to get face to face with dangerous animals. Tourists get into mobile cages so that they can entice various big cats such as Bengal tigers, lions, bears and other animals. Live animals are fed to the animals for you to watch them hunt. Do take care about safety there. There is also a theme park for children.

China's best big city parks offer a combination of very low prices and an amazing variety and quantity of animals presented close-up! These are world-class zoos and easy to access by urban metro train. 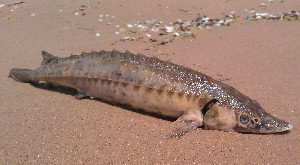 The Chinese sturgeon is a huge animal and a very rare species you can see at the Beijing Zoo.

Beijing Zoo is an older zoo since it was one of the first of its kind in China. It is a big zoo, and it has been ranked number 7 in size in the world. In the 89 hectares or 220 acres are packed 5,000 animals of about 450 species. There are about 5.5 hectares of pond. Additional hundreds of aquatic species are in the Beijing Aquarium within the zoo area, so in one day, you can see and experience much. It is actually easily accessible in the city via Zoo Station on Metro Line 4.

The zoo specializes in various species of animals of China such as Chinese giant salamanders, giant pandas, South China tigers, and many more. Of the animals, the giant pandas are the most popular. It can get crowded though since about six million people visit each year. A peacock at Guangzhou Zoo

Guangzhou Zoo is in one of China's richest regions and the zoo is a rich experience with 4,500 animals of 450 species, and the tickets are relatively low priced. It is one of the largest urban zoos in China (42 hectares or 103 acres). It is easy to go to as well since it is on Metro Line 5 at the Zoo Station.

It is much less expensive than the big safari parks, and since they breed the animals, a part of the fun is to watch the baby animals or the animals with their parents. The wildlife is better taken of and has better living conditions. There is a lot of vegetation in the pens, so they look more like natural areas. You can get up close to see the animals behind the bars. There are African dancers, acrobats, clowns and trained circus animals for the children. The Zoological and Botanical Garden contains a collection of plants and small animals in an area of about 5 and a half hectares, and it is one of the oldest zoos in the world. It is located in a prime area for tourists at the base of Victoria Peak that is one of Hong Kong’s most popular attractions. It is near the Peak Tram, near the Mid-level Escalators that goes through a favorite tourist area, and close to Hong Kong Park.

It is a small free public zoo, but the variety of animals, mainly a variety of small primates that are cute, and the open atmosphere makes it a good a good place for small children. Though it is free, it is usually not crowded and not commercial.

The garden area is also free and has about 1,000 species of mostly tropical and sub-tropical plants. The garden complex includes a greenhouse with orchids and carnivorous plants.

Hong Kong Park is within quick walking distance west of the Zoological and Botanical Gardens. It has a world-class free aviary with 600 free flying or hopping birds of about 80 species and a well-stocked public greenhouse building.

You can watch the birds freely fly around in the inside of the big bird enclosure, and as you walk above the tent structure on the park path, you can see the birds from above and also see the rest of the park and the scenery. There are also cages for predatory birds that are not in the enclosure.

Kids like seeing animals up close and petting and feeding them. They like snacks, entertainment, circuses and animal tricks. The scary safari parks might not be appropriate for little children, and some of the biggest parks and zoos are too big for them. So we suggest Shenzhen Safari Park as the best for high quality facilities, easy transportation, and a safe and fun environment.

Shenzhen Safari Park is in Shenzhen, one of China's most modern cities. It is 63 hectares or 158 acres in size, so it is much smaller than Chimelong Safari Park. It is designed as a children's zoo since there are clowns and easy and comfortable internal transportation through the safari area. However, the safari ride presents an interesting array of animals.

Small children can get close up to the animals and watch the animal and circus acts, and there are usually lots of children there. There is a building for ice sculptures that has an ice Eiffel Tower and an ice slide. 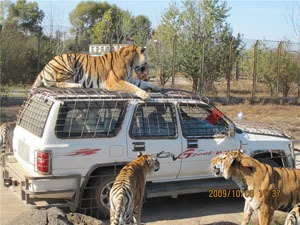 Harbin's Siberian Tiger Park is in the far northeastern city of Harbin.

It is notable for the literally hundreds of big cats that they raise there. So if you want to see the world's biggest cats from around the world including various species and cross species of tigers and lions and even ligers, lion/tiger mixes, you can go there.

Harbin is an out-of-the-way city, but the Siberian Tiger Park is conveniently in the city. As you can see, the cats get very up close. It is near the Harbin Ice and Snow Festival venue. The Chengdu Giant Panda Breeding and Research Base is also easy to go to as it's only 10 kilometers from Chengdu. Giant pandas are China's most popular animal, and what makes this panda base more of a treat for tourists is that the area is a park-like setting with flower gardens and bamboo.

It has become famous as a place where you can see the pandas and panda cubs up close and be able to help care for them. It is one of the The Top 4 Places to See Giant Pandas in China.

If you want to get close to them and interact with the animals, we can arrange that as part of our Giant Panda Volunteer Program or on a private visit with us.

See China's Amazing and Rare Animals with Us 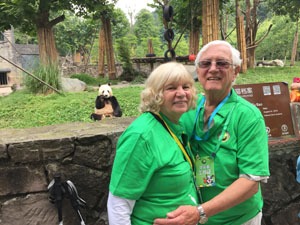 Enjoy seeing giant pandas and other interesting animals in China.

Instead of just going to human-made parks and zoos, consider going with one of our personal nature tour guides out to see the wild animals in nature.

You can go on birdwatching tours with us, go out to see the golden monkeys in Yunnan, or go with expert tour guides to find and see other animals in China's big nature reserves.

For example, you can go on a hiking and photography tour in Huangshan National Park with our expert photographer guides who know the area well.

If you'd like a tour to see China's interesting animals, tell us what you'd like to do, and which animals you'd like to see, and we can create a tour tailored for your requirements. You'll have the flexibility of deciding what you want to do, where you want to go, and various details such as accommodations and meals. See our China Nature Tours.

China's best aquariums and zoos are in Shanghai and Beijing, so here is a suggested tour of the cities that we could modify according to your interests:

We could design an exotic animal tour according to your wishes. Let us create a unique trip for you! The Top 10 Tourist Attractions in China The Top 7 Natural Wonders of China