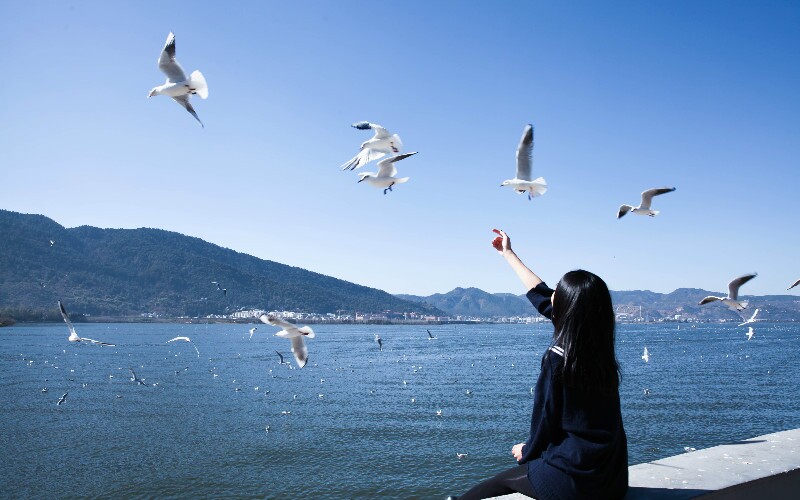 In China, there are approximately 1,450 bird species. Thanks to the geographical location and the varied climate, there are 802 bird species living in Yunnan Province — about 64% of the total number in China and 9% of the bird species all over the world.

With regard to these figures, Yunnan has the highest amount of bird species in China and Sichuan comes in second with 628 species (according to statistics recorded in 2015).

In Yunnan, there are two bird migration routes: one is in the valley of the Jinsha River (on the upper reaches of the Yangtze River) to the south, the other one is down from the high plateau of Qinghai across the Hengduan Mountains and then south of the Ailao Mountains and the Red River Valley.

The birds fly northwards to breed in spring and then move to the warm north in autumn; some fly through Yunnan while others stay there for winter.

The migration is the greatest risk to life for the birds. They migrate twice a year between their breeding grounds and winter quarters. In Yunnan, the topography forces the birds to fly through the Hengduan mountain range with its unique climate. The migration time falls exactly in the season with impenetrable fog walls and without moonlight for orientation.

Many birds are killed in the mountains and forests, and are the victims of nets and traps; therefore, the mountain range has been called the "bird hunting mountains" and "bird death mountains".

Highlanders light fires and, if the birds are exhausted and have lost their orientation, they will be attracted to them and could then be killed in large numbers with nets and bamboo poles. Up to 1,000 birds can be caught this way in one night by a person. This has taken place annually for 1,200 years. In some areas, some Yi minority families can live for a year on the profits earned from killing these birds.

To protect the birds, more than 40 bird experts from Japan, Vietnam, the Philippines, and Thailand met in 1997 for scientific research and to carry out investigations in the Longqing Pass. The Weishan station was built for bird ringing and has banned the killing of birds.

The Longqing Pass in the district of Weishan is located about 12 kilometers from the city of Dali. The great bird sanctuary, which includes the ringing station, covers 292 hectares of land. The station is located at an altitude of 2,440 meters at 25°18' N and 100°21' E. It is the 32nd ringing station in China’s network.

Around the station, people can easily observe the birds. About 60 species of migratory birds pass through the station area.

The birds’ flight time runs from August until early November. Ten nights of fog are counted each month. The villagers now only light small fires to guide the migratory birds rather than to kill them. Also electric light is used, making the autumn flight safer and brighter for the birds.

The black-necked cranes spend the winter in Zhaotong. They arrive in September/October and stay for approximately six months before flying to North China in April to breed. Other birds can also be seen in this reserve.

From November to March, black-headed gulls (Chroicocephalus ridibundus) fly to Kunming for the winter, where they can be observed at Dianchi Lake as well as at Cuihu Lake and Caohai Lake.