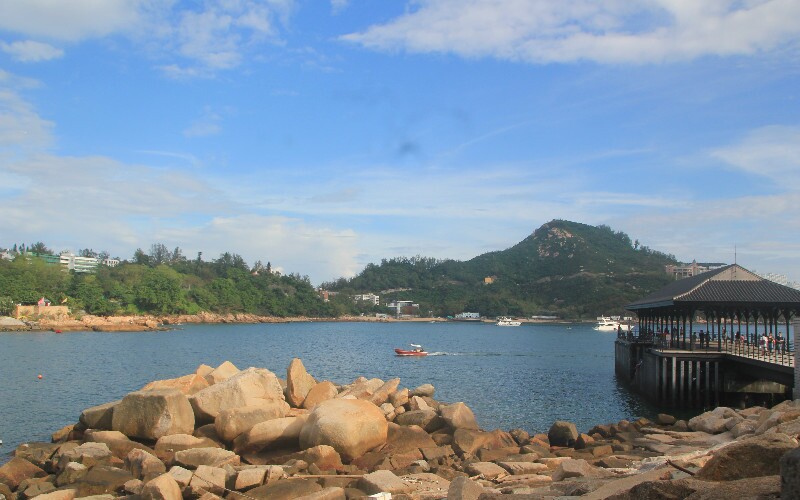 There are 9 country parks along the shore of eastern Hong Kong from the Shenzhen border in the north to Clear Water Bay near Hong Kong Island. A portion of the parkland is included in two "geo-parks" that were established in 2009. These two "geo parks" are meant to showcase unusual rock formations. Hiking in the area will put you through natural parks, geo parks, and undeveloped coastline with great natural beaches where you could surf, camp, hike, swim, dive and canoe.

Along with Lantau Island's parks, the big tracks of country park in the east are Hong Kong's best outdoor areas. Because of the good trails, big size, and unusual scenery of lakes, waterfalls, rock formations, islands, and big empty beaches, eastern Hong Kong is great for outdoor adventure.

Sections 1 through 4 of the MacLehose Trail goes through this area and are described later in this article.

There is good hiking over high hills along the shore and through amazing scenery and rock formations in eastern Kowloon. The advantage of these parks as a place for some outdoor recreation and adventure is that they are big and relatively quick to go to from Kowloon.

Sai Kung East is still perhaps the most beautiful hiking area and good for tent camping. In this picturesque natural area, you'll find a public campsite, stores, waterfalls, beaches, strange rocks, and Stage 1 and 2 of the MacLehose Trail.

While at Tai Long Wan, many people might enjoy walking over to the waterfall near Sai Wan or going up the steep ascent of Sharp Peak.

Ham Tin Wan, one of the four beaches of Tai Long Wan, has a small campsite built by the government to enjoy. There are flush toilets. You could camp on the beach.

Long Ke beach is more difficult to reach over a rough trail. The campsite is more rustic with space for 6 tents. But you can also camp on the beach. There is a stream for water when it is flowing, and there are dry pit toilets.

Transport: The end of stage 2 is at Pak Tam Au. It is a popular entry point for the beaches. From Sai Kung, take Bus 94 to Pak Tam Au.

Another entry point for the MacLehose Trail and the beaches is the Sai Wan Pavilion terminal. You could get there by taxi or our China Highlights tour driver.

By taxi, say Sai Wan Pavilion and show the driver: 西灣亭 for 大浪灣遠足郊遊徑. A green taxi from Sai Kung to the pavilion costs about 90 or 100 HKD.

To go by public transport to Sai Wan Pavilion:

Two Global Geoparks: Hong Kong has places where the geology and rock formations are interesting and good places to hike. They were chosen to be internationally recognized "geo parks" in 2009. There are two geoparks for two different kinds of geology: sedimentary and igneous (volcanic).

The Sai Kung Volcanic Rock Region includes Sharp Island, the Ung Kong Group of islands, the Ninepin Islands, and the area of Sai Kung East Country Park east of the High Island Reservoir. Of these, you can directly hike to see the columnar rock formations near Long Ke beach and the reservoir along Section 1 of the MacLehose trail.

At the High Island Reservoir East Dam along Section 1 of the trail, you can see sea caves. At the dam, walk down the stairs. Go right to the end, and you'll be at the caves.

The other geo-park is to the north. Part of the Northeast New Territories Sedimentary Rock Region is in the Plover Cove Country Park, so you can access its sites by hiking, but most of the geo park is on islands in the eastern sea.

Scenic Areas in Plover Cove:The Double Haven Geo Area of Plover Cove Country Park is a small protected bay that has eroded red siltstone and red sandstone formations. The geology there is complex. The sedimentary rocks there are rocks that resulted from erosion. Sand, silt and debris conglomerated into sedimentary rocks.

At the park, you could also visit a waterfall called Bride's Pool and the Ma Shi Chau sedimentary formation.

The Ma Shi Chau sedimentary formation is not in the Plover Cove Country Park itself, but about three kilometers south. It is in parkland called the Ma Shi Chau Special Area.

Transport to Plover Cove Country Park: You can take the MTR to Tai Po. Then take Bus 75K from Tai Po Market terminus. Go to the Tai Mei Tuk bus stop at the southern border of the country park.

Transport to the Ma Shi Chau Special Area: Take Bus 75k from Tai Po to Shuen Wan Chan Uk. Then walk south or take a taxi on Sam Mun Tsai Road for a little more than a kilometer.

Sedimentary Rock Formations on the Islands

The Port Island-Bluff Head Geo-Area and the Tung Ping Chau Geo-Area are islands out at sea. So they can be reached by boat.

The Port Island-Bluff Head islands contain red rock called "Danxia" that is the same kind of red rock that covers a lot of southern China. Danxia formations make up the small rocky hills and mesas that China is famous for such as those around Guilin in Guangxi Province far to the west.

Tung Ping Chau is the easternmost island of Hong Kong, but it can be reached via ferry. The island is big and interesting enough to have a hiking trail. If you like extraordinary rock formations, then this flat island is a place to hike around.

The island has the only stromatolite rock formation in Hong Kong. This kind of rock formation has a sponge cake structure, and it is up to 200 meters thick with layers that are about 1 to 5 millimeters wide. The erosion and various colors of the rock layers has produced veins of rock bands in some places. There are many caves at the southern end of the island. The caves are accessible at low tide.

Transport to Ping Chau: To get to the island's Ping Chau Country Trail, first go to University KCRC Station. The KCR is part of Hong Kong MTR system. It goes north to the Shenzhen border. From the KRC station, walk for 15 minutes to the Ma Liu Shui ferry pier. Take a ferry for Ping Chau.

Hiking the first four stages of the MacLehose Trail is probably the best way to see the sights in Eastern Hong Kong. Stages 1 and 2 go through Sai Kung East Country Park. The MacLehose trail in this area should only be attempted if you are in shape and your legs are strong. Stage 2 goes towards Tai Mo Shan in the center of the the trails north of Kowloon in North-Central Hong Kong. Much of this path is along the shore for great seaside scenery.

Sections 1 and 2 go to three of Hong Kong's best natural areas. These are about 15 or 19 kilometers east of Sai Kung. There are an amazing beach called Sai Wan, another beach called Long Ke Wan, and the High Island Reservoir. Section 1 and Section 2 of the MacLehose Trail is rugged and loops through the region.

Section 1 is fairly easy. It takes about 3 or 4 hours to do with breaks. It starts at Pak Tam Chung, goes to the High Island Reservoir, and then goes a further kilometer to the beautiful beach of Long Ke.

If the sun is shining, the water in the small bay glows in beautiful greens or blues. The contrast between green water and the stretch of white beach is amazing. It seems like you are in some isolated Pacific island.

The reservoir itself is big and accompanies the hiker along much of the walk. It was an engineering accomplishment.

At the East Dam and Long Ke beach, you can see rare igneous rock columns. These are a rare geological feature.

Transport: Take bus 94 from Sai Kung Town and get off at the Pak Tam Chung terminus. The starting point near the junction of Pak Tam Road and Man Yee Road is about 400 m from the Barrier Gate.

Section 2 of the Maclehose Trail takes about 5 or 6 hours to finish. The trail is fairly difficult. Food and stuff can readily be gotten in villages or shops along the way. From Long Ke, Section 2 continues uphill to a bigger beach area along Tai Long Wan Bay where people surf and arrive in yachts.

Many people find the uphill walk difficult. Section 2 runs along the top of the hill, but you can see the Tai Long Wan beaches down below.

If you want, you can hike down to the beaches on side trails. Stage 2 of the trail ends at Pak Tam Au. You can catch Bus 94 to Sai Kung from there.

Sections 3 and 4 go through Sai Kung West Country Park. Stage 3 is a difficult four or five hour hike (with breaks) going up and down hills and valleys and through deserted farming area. It is one of the least hiked areas of the entire MacLehose Trail.

There are good views on the hills. The stage ends at Kei Ling Ha. Kei Ling Ha is on a road that divides Sai Kung West Country Park from Ma On Shan Country Park.

Section 4 is a long stage, and it is a quite difficult walk up Ma On Shan in Ma On Shan Country Park. This stage takes 5 or 6 hours with breaks. The scenery is great, with a variety of woodland and vegetation.

The stage heads towards Tai Mo Shan Country Park in the central part of the New Territories. Stage 4 ends at Tate's Cairn, a major tunnel through the mountains.

See more about hiking further eastwards in the central part of the New Territories.

Free park and trail maps and information: The Hong Kong Tourism Board Visitor Centers on Victoria Peak and at the Star Ferry in Tsim Sha Tsui has free pamphlets and maps that provide information about the various trails and country parks. It is a good idea to pick some up.

Plan and make trip arrangements: China Highlights can help you design a trip that includes hiking and camping in Hong Kong. We specialize in arranging transportation and getting tickets for trips to Hong Kong and cities in Chinese mainland according to our clients' interests and travel constraints. We could provide private vehicles, drivers, and guides for individual and groups.

2-Day Hong Kong Coach Tour: Visit the local highlights on a bus. Tell our tour experts to include hiking in eastern Hong Kong. This tour is modifiable, and you can extend it.

You can create your own dream trip and visit the places you want in Hong Kong and China while you enjoy hikes in Hong Kong too.