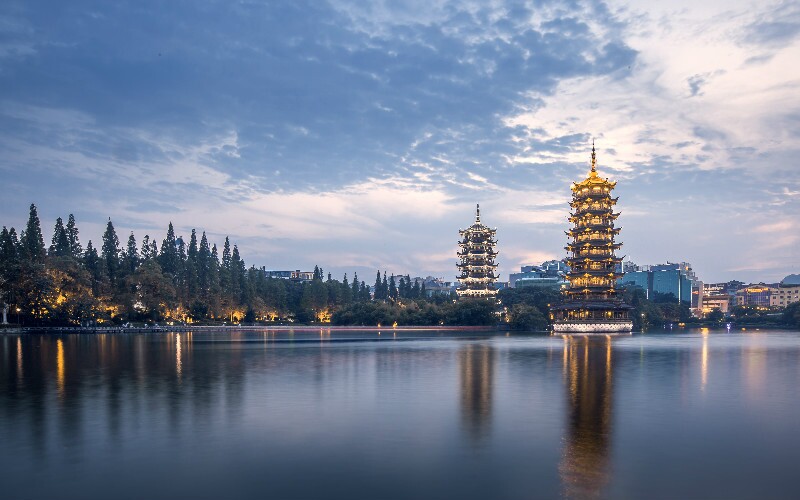 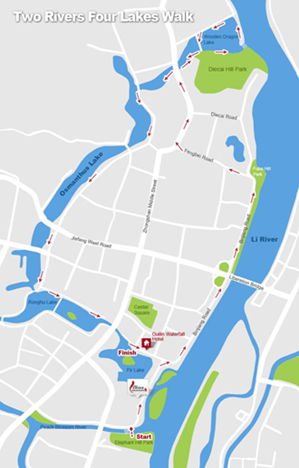 Features: Elephant Hill, Guilin's Two Rivers and Four Lakes, with easy access to Center Square and Zhengyang Pedestrian Street at the end. Total Distance: About 7 km (4 miles) Time needed: a morning, an afternoon, or an evening.

This walk is good for both the daytime and the evening, as the lakes are colorfully lit. On a hot summer's day some of the coolest parts of the city are by the Two Rivers and Four Lakes.

The recommended starting place for this walk is Elephant Hill (象山 Xiang Shan /sshyang shan/). Elephant Hill only requires a short ascent on stone steps. From there you can look out on the Two Rivers and Four Lakes, which wind their way through Central Guilin. Elephant Hill marks a man-made confluence of the Peach Flower River (桃花江 Taohua Jiang /taoww-hwah jyang/) and the Li River (漓江 Li Jiang /lee jyang/). There is a lock system by Elephant Hill where most Two Rivers Four Lakes cruise boats stop for disembarkation. Some continue on to their starting place near Liberation Bridge to complete the circuit. After climbing the hill cross the lock system to the Elephant Hill viewing area. 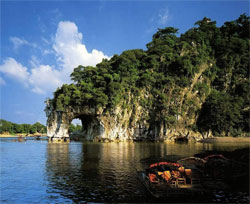 There Binjiang Road bends left and becomes Fengbei Road (the larger left fork). After 500 meters Fengbei Road meets Zhongshan Middle Road (the north-south axis of Guilin). Turn right and follow the main street for 500 meters and you will come to the bridge over the first of the Four Lakes, Wooden Dragon Lake (木龙湖 Mulong Hu /moo-long hoo/).

Turn right off Zhongshan Middle Road and follow the path around Wooden Dragon Lake. There is a small village of traditional Chinese style buildings clustered around the lake and a small bridge over it, which you will come to after 200 meters. Following the lakeside for a further 200 meters you will come to the lock system which allows cruise boats to be lifted from the Li River up to the city lakes. Folded Brocade Hill (叠彩山 Diecai Shan /dyeah-tseye shan/), marking the entrance to the lock system, will be to your right. 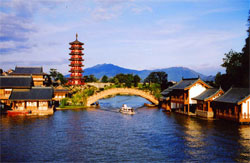 Walk round the river end of Wooden Dragon Lake, through the classic-style buildings, and cross the small bridge that was passed earlier (about 400 meters). Turn right and re-walk the 200 meters of path towards the Zhongshan Middle Road Bridge, but this time walk under the bridge. Walking under the bridges over the Four Lakes, you will see many old style Chinese characters representing what the ancient poets and dignitaries have said about Guilin. There are also pictures similar to cave art. These require a tour guides explanation.

Another 300 meters on and you will come to another smaller bridge. Go under this and you will reach the longest of the Four Lakes, Osmanthus Lake (桂湖 Gui Hu /gway hoo/). The osmanthus tree, similar to a laurel is what gives Guilin its name and unsurprisingly Osmanthus lake is lined by these trees, as are many of the roads in Guilin. 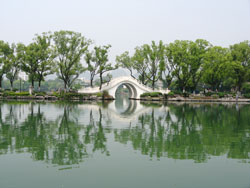 Turn left and keeping Osmanthus Lake on your right walk for about 1,800 meters, crossing roads at three bridges. The last of these is a miniature version of Golden Gate Bridge, San Francisco. After this bridge there are two small bridges holding only one-way vehicle traffic, and then Osmanthus Lake joins Banyan Lake (榕湖 Rong Hu /rong hoo/). The banyan tree, after which this lake is named, is a spreading tree whose limbs become roots and prop-like supports when they come into contact with the ground. The classic example is the Big Banyan Tree in Yangshuo County.

Now following Banyan Lake with the water to your right, proceed for 150 meters and you will come to a division of the lake. In the next part of Banyan Lake is an island, with a slender glass bridge winding its way from the lake side to the island. This portion of Banyan Lake has a music and light fountain show, which is activated when the cruise boats pass through in the evening.

Continue along the bank of Banyan Lake for another 400 meters and you will come to large bridge supporting Zhongshan Middle Road. Go under this and you will come to the last of the Four Lakes, (Chinese) Fir Lake (杉湖 Sha Hu /shaa hoo/). This lake, apart from a shady, Chinese-garden-style serpentine path around it, also boasts its very own two towers: the Sun Tower and the Moon Tower. These pagodas are one of the most photographed things in Guilin and can also be accessed via a ticket gate on the other side of the Lake. 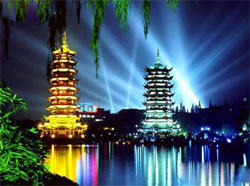 This finishes the walk, and it is up to you how much you explore Fir Lake. A 400-meter walk along the bank, with the lake on the right, will bring you back to Binjiang Road and complete the circuit. On this corner of Sha Hu is the prestigious Waterfall Hotel and behind it Center Square and Guilin’s No.1 pedestrian street, with many cafes, bars, and restaurants to choose from for refreshments. Opposite the Waterfall Hotel, across Fir Lake.

China Highlights is your China travel expert. We can help you customize a walking trip in Guilin.