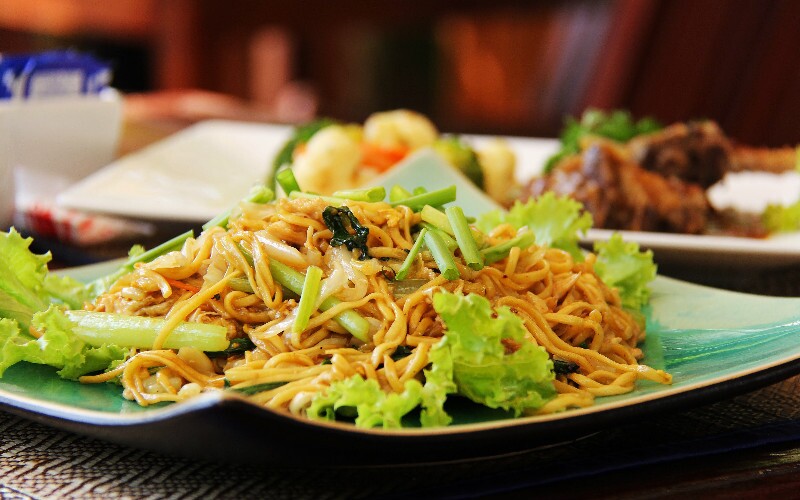 How to Cook Chow Mein Chow mein refers to stir-fried noodles with little  soup that are characterized by a salty taste. The name is from the Taishan Chinese dialect (a kind of Cantonese). Taishan is a county of Guangdong province. There are many varieties of chow mien all over the world. It is a famous Chinese cuisine.

The following is an introduction of cooking methods for various kinds of chow mein.

Beef chow mein is a main course with noodles and beef being its main ingredient . It is very delicious, and  nutritious.

3. Drizzle with a dash of oil again, and stir-fry with beef until well-done. Pour them out and filter out the oil.

4. Add scallions, ginger slices and beef into the wok, then add some cooking wine.

5.Mix soup andamylum together evenly with oyster sauce, and stir them into a starchy sauce.

6. Spare the sauce evenly on the noodles, pile them onto a plate and it is done.

The cooking methods of pork, mutton, and chicken chow mein are the same as beef chow mein. The only difference is the meat. 1. Break the eggs and put them into a bowl. Beat the eggs with chopsticks until thoroughly mixed . Add a little refined salt  and set them aside to  use later.

2. Wash vegetables and cut them into small pieces. Clean the scallions and dice them finely. Set them by to use later.

3. Cook the noodles until they are well-done. Rinse them with cool water. Dish them out of the wok and leave them to cool.

4. Add an appropriate amount of peanut oil into the wok. Heat up the wok until it is seventy percent hot. Add the egg mixture into the wok and stir the eggs around until they are scattered and broken. Place them in a bowl when done.

5. Get another wok and heat it up with the rest of the peanut oil to seventy percent hot. Then add the scallion pieces into the wok. When the scallions spread their fragrance, drop rape pieces, soy sauce, and refined salt into the wok. Cook them until welldone.

6. Nextdish them out and leave the juice in the wok. Bring  the juice to a boil then put the noodles into the wok and stir for about 3 minutes. When the juice has cooked out and the noodles are well-done, add the eggs and vegetable pieces. Mix them evenly then  serve.

Condiments: a large tablespoon of garlic lobster sauce and oyster sauce eachcooking wine, soup stock (soup which is used to boil short necked clams), half a bowl of rice, and a little salt.

Heat up the wok with two lager tablespoons of oil. Add peppers, gingers and scallion pieces. Fry them until the fragrance bursts out. Drop oysters, shrimps, clams, and mushrooms into the wok. Stir-fry them immediately for a fewminutes , and then remove from dish.

Boil half a bowl of soup stock with some salt. Put the well-done noodles into the wok and stir-fry them until the soup cooks out. Add the seafood back, fry evenly, then the dish is finished.

Plain chow mein is a kind of noodles stir-fried with vegetables.  This colorful dish is very appetizing. 1. Cut the mushrooms into slices, flowering cabbage into sections, and bamboo shoots into pieces. Soak the dried beancurd sticks with warm water, wash them, then chop into pieces. Slice scallions and gingers into filiform pieces after removing their peels. Set them aside for later use.

2. Cook the noodles until they are well-done. Put them out and leave them to cool.

3. Heat up the wok with peanut oil. Then add the noodles and stir-fry until they take on a golden color. Dish up and remove the oil.

4. Get another wok. Spread a little peanut oil, and heat the wok to seventy to eighty percent hot.

5. Drop the filiform scallions and gingers to stir into the wok.

7.Add the cooking wine, soy sauce, refined salt, and light soup and bring to a  boil.

8. Then mix the fried noodles in and stir-fry together. Turn down the heat and braise with a cover for a while.

9.Put in the monosodium glutamate and drop the sesame oil, and then the dish is done. Our customers learning to cook Chinese food in Yangshuo

If you want to learn to cook traditional Chinese dishes, we offer you the opportunity. See our most popular food tours, which offer cooking classes as well as must-see sights.

Or you can contact us and we can add the experience of learning to cook Chinese dishes to your China tours.

chinese-food How to Cook Sweet and Sour Pork