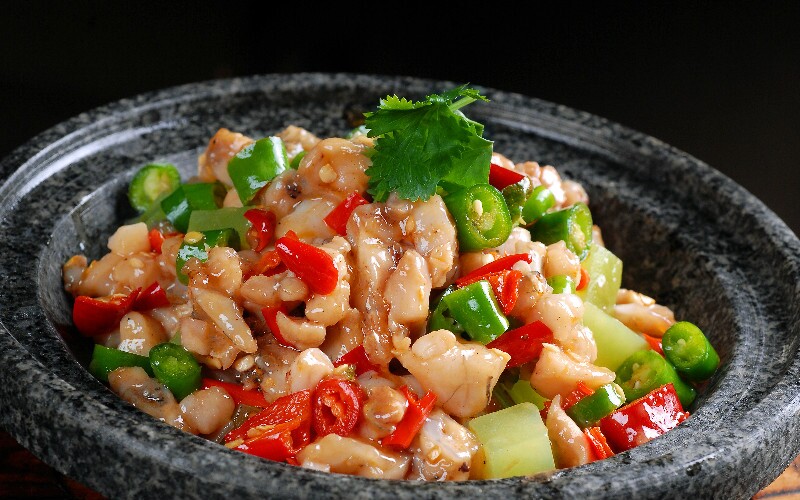 How to Cook Kung Pao Chicken

Kung Pao chicken is a famous Chinese dish made with diced chicken, chilies, and peanuts. In some Western countries, this world-famous dish is synonymous with Chinese cuisine.

The amounts of the seasonings can be adjusted according to personal taste.

(Omit the chilies for a non-spicy Kung Pao chicken.)

1. Clean the chicken breasts and dice them.

2. Stir together the cooking wine, cooking starch, and salt, and marinated the chicken cubes in the mixture for half an hour.

3. Soak peanuts in hot water for 10 minutes and remove the peanut skins.

4. Clean the dried red chili peppers and cut them into small pieces. Clean and chop the green onions. Clean and dice the ginger and garlic.

5. Make a bowl of starchy sauce with the sugar, soy sauce, rice vinegar, and cooking wine.

1. Use a moderate amount of oil to fry the peanuts until they turn yellow, drain them, and set them on a plate to cool. Cool peanuts are crisper.

2. Using high heat, heat oil in a hot wok, then add the chicken cubes, and fry until they turn slightly brown. Drain them and remove them to a plate.

3. Leave some cooking oil in the wok, and using a high heat stir-fry the dried chilies for 30 seconds to release the spice.

4. Then re-add the fried chicken cubes and add the diced garlic and ginger, and the thick broad-bean sauce. Stir-fry until the sauce becomes red.

5. Add the starchy sauce and chopped green onions, and re-add the cool fried peanuts. Stir-fry together for 30 seconds.

The History of Kung Pao Chicken

It is said that the dish was created by Ding Baozhen (1820–1886), a governor of Sichuan Province during the Qing Dynasty. He came from Niuchang Town, Zhijin County, Bijie City, Guizhou Province.

According to the legend, Ding Baozhen was very interested in cooking. He liked eating chicken and peanuts, and especially loved spicy flavors. He created a delicacy made of diced chicken, red chilies, and peanuts while in office.

It was originally a Ding family recipe, but as time passed it became a well-known dish. However, few people know why it is named Kung Pao…

Ding Baozhen was a good governor during his 10-year service in Sichuan, contributing a lot to the local people's wellbeing. So the Qing government conferred upon him posthumously an official title: Kung Pao (Wade-Giles romanization of 宫保 Gōng Bǎo ‘Palace Defender'), which meant an officer who tutors the crown prince.

Travel with Us and Learn to Cook Traditional Chinese Dishes

Our customers are learning cooking Chinese food in Yangshuo.

If you want to learn to cook traditional Chinese dishes in China, China Highlights offers you the opportunity. See our most popular food tours, with cooking classes alongside must-see sights:

Or you can contact us and we can add the experience of learning to cook Chinese dishes to your very own tailor-made China tour.