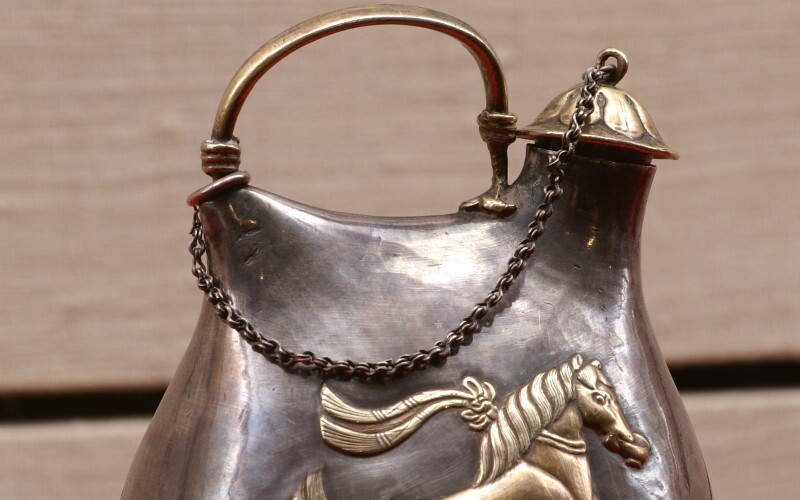 The pottery drinking vessels emerged in the Neolithic Age, 6,000 years ago, with the increasing development of social productive forces. They were similar to alms bowls used by monks, and they were used for storing wine rather than drinking wine in respect that the early form of wine was pappy (suitable for eating) rather than liquid (not suitable for drinking).

The drinking vessels were gradually split off from food-holding vessels owing to the development of the wine-making industry and the gap between the rich and the poor, which became a symbol of social status for the owners, resulting in the emergence of professional winemakers in society. The pottery drinking vessels had various shapes, such as cups, bowls, jars and teapots.

The bronze vessel industry originated from the Xia Dynasty (2070 BC-1600 BC), flourished in the Shang (1600 BC-1046 BC) and the Zhou (1046 BC-221 BC) dynasties and declined in the Spring and Autumn Period (770 BC-476 BC), during which the bronze vessels were divided into food-holding wares, drinking vessels, water containers and musical instruments, and the drinking vessels rose to an unprecedented level in the Shang Dynasty.

The emblazonry, shapes and epigraphs on the drinking vessels of the Shang (1600 BC-1046 BC) and the Zhou (1046 BC-221 BC) dynasties had a substantial influence on the late calligraphic works, sculptures and paintings, which was an important part of the history of ancient Chinese art and culture.

The lacquer drinking vessels inherited the form and structure of the bronze ones, highlighted by the eared cups. 114 eared cups were unearthed from 11 Qin-era tombs in Yunmeng of Hubei Province, and 90 of them from the first tomb of the Mawangdui Han-era Tomb Cluster in Changsha, Hunan Province.

Porcelain vessels came forth during the Eastern Han Dynasty (25-220), and were far better than pottery vessels of the previous dynasties in performance. The drinking vessels were comparatively smaller in the Tang Dynasty (618-907), and the porcelain-making industry reached its peak during the Song Dynasty (960-1279), resulting in a number of delicate porcelain drinking vessels emerging.