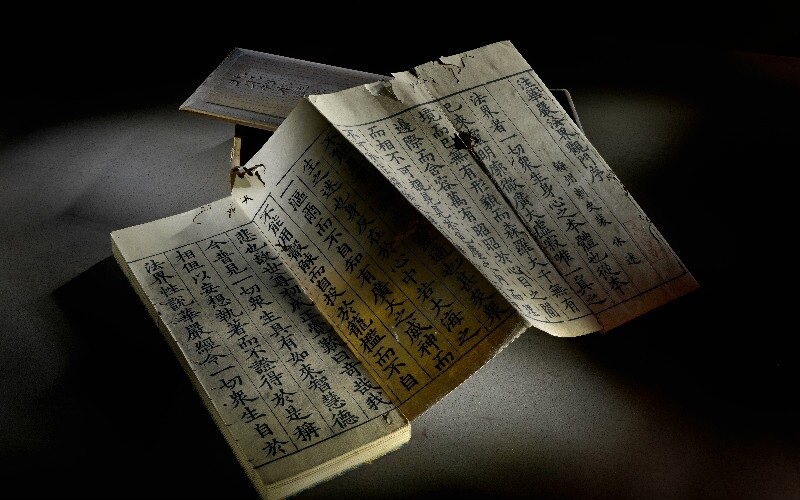 Chinese science texts give an idea of the state of knowledge in the dynastic eras. During several eras,Chinese scientists and inventors led the world in various fields. Gunpowder, printing, the compass, and paper are the “Four Great Inventions of China.” The dynastic eras of fastest techological and scientific advancement were the Han and Song eras. Little remain of the scientific texts from before the Qin Dynasty era because there was a wide-scale destruction of books that people call the “Book Burning and Burial of Scholars.” Several important mathematical texts remain from the Han era that immediately followed the Qin era. The scientific texts of the Song era show that the scientists and inventors reached a pinnacle of indigenous development of astronomical, mechanical engineering, alchemical and geographical knowledge. The Han Dynasty mathematical texts showed their knowledge of algebra and geometry, and Shen Kuo and Su Song of the Song court wrote texts that document their advanced knowledge.

From the Han Dynasty period that followed the Qin era, several mathematical books stand out as achievements. Mathematical texts were found in Hubei Province that date to about 200 BC. One of these is called the Suan Shu Shu (Computation and Numbers Book). It shows how to solve arithmetic problems that officials or people doing business face. A more advanced book called the Jiuzhang Suanshu (Nine Chapter Computation Book) is thought to have been written later. The book features basic algebra such as finding cube roots and square roots. Negative numbers are also used. Another mathematical text compiled during the Han era was The Arithmetical Classic of the Gnomon and the Circular Paths of Heaven (Zhoubi Suan Jing) about astronomical problems. It is said text has a mathematical proof for the "Gougu Theorem" (勾股定理;  a2 + b2 = c2) that is known as the Pythagorean Theorem in the West. A method of determining the distance of the sun from the earth by using a right angled triangle is described.

The second period of rapid scientific and technological advancement was the Song era. Two men in particular stand out. Both were officials in the Song court and worked in the capital. Shen Kuo (1031–1095) and Su Song (1020–1101) both wrote scientific treatises about their research and about various fields. Shen Kuo’s Dream Pool Essays of 1088 was a voluminous scientific composition that can be said to contain the forefront of knowledge of his era. He was a world leader in research on the compass and geomagnetism. He is said to have discovered the concepts of true north and magnetic declination towards the North Pole. He described the magnetic needle compass. If Chinese sailors understood this work, they could sail long distances more accurately. This knowledge would predate European discovery. One of his essays was about how a printer made and used ceramic movable type for printing texts. He also did advanced astronomical research for his time.

Su Song was one of Shen Kuo's court rivals. He wrote a treatise called the Bencao Tujing (Illustrated Herbalist) in 1070 with information on medicine, botany and zoology. He also was the author of a large celestial atlas of five different star maps. He also made land atlases. Su Song was famous for his hydraulic-powered astronomical clock tower. Su's clock tower is said to have had an endless power-transmitting chain drive that he described in a text on time keeping, clock design and astronomy that was published in 1092. If this is so, it may be the first time such a device was used in the world. The Song Empire was conquered by the Mongols, and these inventions and the astronomical knowledge seem to have been forgotten or thought unimportant in later eras.