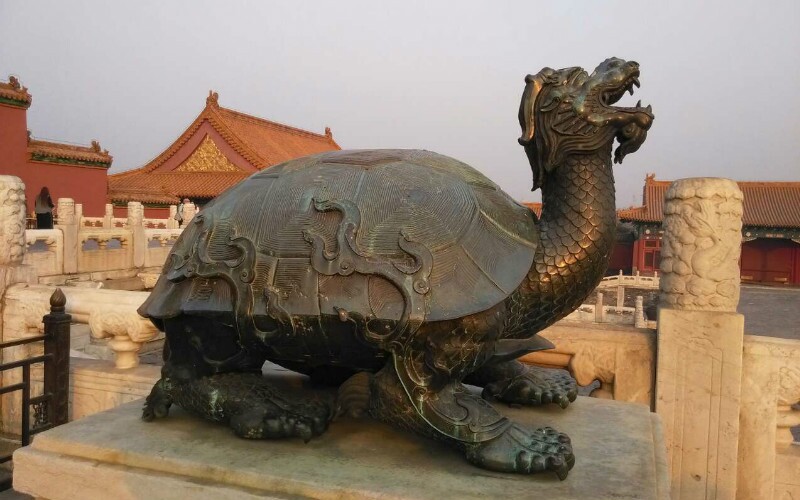 Tortoise, together with dragon, phoenix, and unicorn is considered to be four auspicious beasts. While dragon, phoenix and unicorn are imaginary creatures that only dwell in legends and on people's lips, tortoises have coexisted with human beings for a long time and are renowned for their ability to sustain a very long life. So the tortoise was apotheosized long before the other three beasts. During the Yin-Shang period, people held the belief that the tortoise has the ability to know human being's bliss and misery and to serve as medium between God and human being. Thus many aboriginal religions in China began to hold tortoise as auspicious and holy totem. Because of the tortoise's deity nature, people began to use its bone to make predictions about the future.

The deity tortoise had enjoyed huge respect which fact can be affirmed by the existence of tortoise statues and replica in the emperor's palace, court yards and mausoleums to represent the long-living prosperity of the state. Tortoise has the dual function of representing longevity and of predicting the future. In ancient times, before any big ceremony , the soothsayer would burn some tortoise bones and predict the future by the the grain of the cracks them.

The tradition of raising tortoise as a pet enjoys popularity among the folks . In south China , people like to raise tortoise in the patio or the courtyard because the tortoise feeds on mosquitos and can be a barometer of the weather. A kind of tortoise whose shell is covered with fluffy green down enjoys covetous favor from wealthy households. This kind of tortoise is very small and looks like an emerald in clear water, making it a feast for the eyes and symbolize auspiciousness.

The tortoise meat is very nutritious and has great culinary and medicinal value. There are many recipes for cooking tortoise meat. In Zhe jiang , the "stewed tortoise' "braised tortoise" are held to be first-class and nurturing dishes. Medication-wise, tortoise meat can curtail inflammation. The tortoise shell , after being stewed in a special way can also become a first class tonic. Medical research has shown the tortoise can help to enhance the immunity system and nip the cancer cells in the bud.