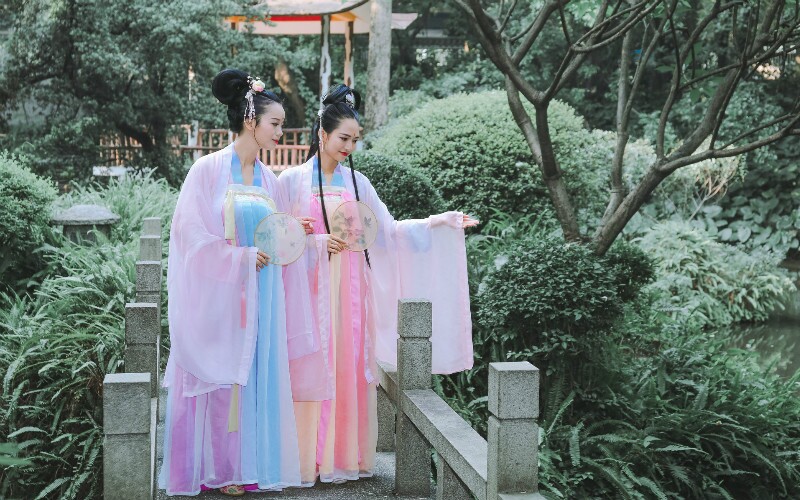 Hanfu, the traditional, historical dress of the Han Dynasty.

Quick Facts About the Han Dynasty

People's Lifestyles During the Western Han

People's lifestyles during the Western Han were improved significantly thanks to the economic and social stability.

For the rich landlords and nobles, who lived in the city, they had power,gained priority to wear silk, and were well educated.

For the Confucian scholars, who were respected in society, they had priority to be on the government staff in court. The merchants in the Han Dynasty were rich due to the prosperous trade. But they were generally not respected in society. According to the law, merchants couldn't wear silk and travelled by carriage. Neither they nor their children could attend the imperial examination to become officials.

Merchants also had to pay double taxes in the Han Dynasty.

But the peasants at the bottom, even though their taxes were reduced during the Han Dynasty, still lived in tough conditions. They had to face many issues like the annexation of land, natural disasters, and heavy taxes.

Culture of the Han

The Silk Road trade caused cultural changes. The Silk Road route went through territories where Buddhism was the main religion. A type of Buddhism was already believed by a portion of the population centuries earlier at the end of the Warring States Period of the Zhou Dynasty.

But the Yuezhi people introduced a new version called Mahayana Buddhism to the northern part of the empire when they went to Chang'an and taught about Buddhism around the year 1 BC.

The religious legacy of the 400-year Han era was the development of Confucianism and Daoism, and the acceptance of Mahayana Buddhism.

During the Western Han era, the religion of Daoism developed and became China's major indigenous religion. Confucianism was revived and mixed with Legalist ideas to forma long enduring political philosophy and religion.

The most famous cultural achievement of the Han Dynasty was the Records of the Grand Historian written by Sima Qian between about 109 and 91 BC.

It was the first biographical book in Chinese history, which records the history from the age of the legendary Yellow Emperor to the reign of Emperor Wu of the Han.

The Western Han empire was the first large and long-surviving empire in the region. It lasted from 206 BC until 9 AD. The Han empire was successful politically and economically.

The Western Han Dynasty succeeded in stabilizing the empire, expanding its territory, increasing trade, and beginning a tradition of dynastic government staffed by Confucian scholars.

Emperor Gaozu, the founder of the Han, was born as Liu Bang from a peasant family. He was a low-level official in the Qin army but then he became an outlaw. With the people and as the leader of an army, he defeated his main rivals in war to become emperor.

At first, Liu Bang emulated the rule of the Qin court, but he allowed more freedoms and usedfewer peasants for conscript labor. He began acting more tyrannical later on.

He lowered taxes and tried to win the support of the common people by treating them less harshly than the Qin rulers before him.

He allowed other leaders to have kingdoms in the eastern part of the empire, and they had spread over most of the territory of the empire. The imperial court had direct power over the western third of the empire.

Cultural Framework of the Empire Liu Bang inherited a large empire and the foundation of imperial rule laid by the Qin court. He utilized a standardized written language for the whole empire that had been promulgated by Li Si.

Liu Bang had a favorite Confucian teacher who convinced him of the need for that philosophy, and he and his successors promoted this political theory.

Along with this imperial framework, Liu Bang inherited the military technology and tactics that had also enabled the Qin Dynasty to form their empire.

The Xiongnu were a group of nomadic herders who had succeeded in defeating the Yuezhi and other armies to the north and west of the Han empire.

They defeated the Han army in 200 BC, and Liu Bang made a treaty with them and agreed to send silk and other goods.

Although Liu Bang had accepted the administration of the kings in the eastern part of the empire, during his long illness before his death, he grew suspicious of some of his top leaders. He regarded them as rivals, and they were either killed or demoted.

Emperor Wu of Han was the seventh emperor as well as the most famous emperor of the Han. He came to power at the age of 16 and he reigned for 54 years. His reign was a time of prosperity, but he became despotic at the end of his life.

The time of his long rule is thought of as the zenith of the Western Han Dynasty.

He was thought to be an effective governor. He concentrated on conquests, trade with the West, instituting administrative policies, and concentrating power to himself.

He instituted policies that were retained by later empires. Almost as soon as he started reigning in the year 141 BC, he presided over an examination of Confucian scholars, and the court put some of those who were successful in the exam in official positions.

Then the ruling court started a Confucian academy. In this way, he established the Confucian Imperial Examination as a way to select officials for governmental positions.Those who passed the examination were guaranteed to be literate and knowledgeable about Confucian political philosophy.

This was the main way that people were selected for government in most of the big regional dynasties during the next 2,000 years.

He initiated a lot of wars. His campaigns usually succeeded, and he expanded the empire so that it stretched to Central Asia, Korea, and Vietnam.

In the year 119, he established the northern boundaries and made peace with the roving Xiongnu by sending several armies against the Xiongnu's leading clans.

Two generals named Wei and Huo made direct assaults on Yizhixie Chanyu's forces, destroyed his Xiongnu army, and nearly captured him. Then the Xiongnu wanted peace for a few years. In this way, he was able to keep the Xiongnu out.

At the same time, Han armies also defeated armies and navies to the south, and the empire expanded into the areas of what are now northern Vietnam, Yunnan, Guangxi, and Guangdong. In this way, by about 100 BC, the size of the Han empire was more than double what it was at the beginning. During the same time, between 130 BC and 100 BC, trade with Western countries brought wealth to the rulers and merchants. Partly as a way to deal with the Xiongnu threat, Emperor Wudi's court sent envoys to the Yuezhi in the west, and a large-scale trade developed on the Silk Road routes.

The trade usually involved large caravans that traveled between Chang'an (modern-day Xi'an), which was the capital of the empire, and the Western countries.

It must have been exciting in Xi'an when caravans of foreigners brought wealth plus new technologies and ideas. In this way, the Han's knowledge of the outside world, philosophy and religion, and technology increased.

Technicians made advances in refining iron and making steel weapons and tools during and after his reign. So by the creation of wealth, territorial expansion, and strength, the Han empire initially prospered a lot. Xi'an, the capital of the Western Han.

Emperor Ping became emperor for a few years (1 BC – 6 AD). During this time, his relatives were regents. The last regent was Wang Mang. He claimed that he had the Mandate of Heaven to rule, which means that it picked him to be the next emperor.

Wang Mang (45 BC – 23 AD), the official who claimed he had the Mandate of Heaven, ruled the Xin Dynasty (which literally means 'new dynasty'). He tried to implement far-reaching policies. Wang Mang tried to change society by abolishing slavery, redistributing the land, and issuing a new currency.

He reforms seem strikingly modern. But there were natural disasters, and peasants revolted against him. After he was killed in 23 AD, the city of Luoyang in the east became the new capital. In this way, the Eastern Han era began.

Luoyang, the capital of the Eastern Han.

After a member of the old imperial clan became emperor again, the Han Dynasty reign continued in the new capital at Luoyang. The first emperor faced lots of enemies and, like the Western Han Dynasty, during the course of 195 years the empire stabilized and then ended in corruption, natural disasters, and internal rebellions.

The Eastern Han Dynasty began when a member of the Han dynastic clan came to power. His dynastic name was Emperor Guangwu.

When he reached maturity, various regions in the empire were in rebellion, and people were also attacking and rebelling. The goal of the first emperor was to conquer the territory and fend off the attacks.

During his long reign, the Red Eyebrows were defeated and he consolidated power in the empire. He defeated Goguryeo attacks in 30 AD on the northeast border and a rebellion in Vietnam in 43 AD.

He also defeated the Xiongnu in 50 AD. He was known as a clever general who didn't rule harshly. During the last two decades, there were a lot of assassinations in the imperial court. In 194, there was a great famine due to a plague of locusts. In 195, Emperor Xian sought refuge with a regional ruler named Cao Cao.

The emperor lived in Xuchang, which was one of the cities that was in Cao Cao's territory. Cao Cao reigned in the emperor's name and had the title of Chief Commander. Cao Cao gathered an army together that included tens of thousands of Yellow Turbans.

In 208, the Battle of Red Cliffs took place. This battle between Cao Cao, Dong Wu, and Shu Han was famous for determining the division of the empire.

Cao Cao had been successful in expanding his territory and defeating rivals until this battle. He was defeated because his rivals made an alliance and set fire to his fleet.

After Cao Cao died in the year 220, his son Cao Pi forced Emperor Xian, who lived in their territory, to abdicate. He named himself the new emperor of the Wei Kingdom.

Xi'an tours: Xi'an was the site of the capital of the Western Han. As such, the main Western Han imperial sites are located there.

A Silk Road tour will let you see how cultures mixed along the trade route. You can think about the rise and fall of all the empires as you enjoy your China trip.