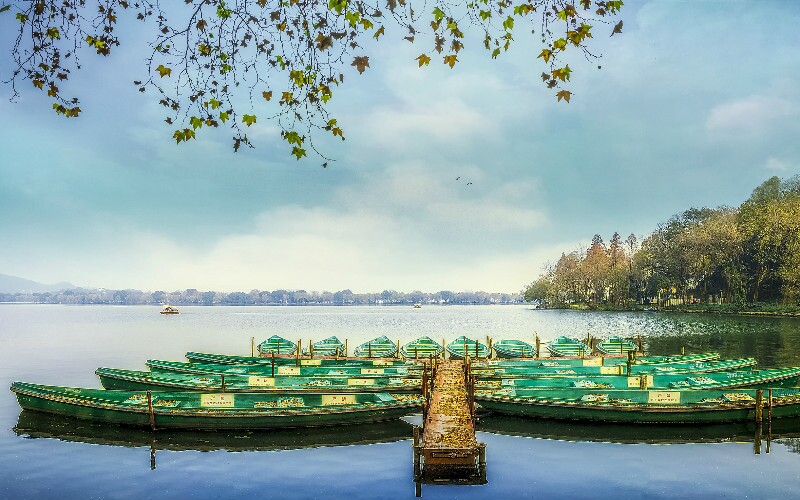 The transportation means for traveling between Beijing and Hangzhou (about 1637 kilometers or 1017 miles) are: air transport, train transport and bus/coach transport. Beijing is a great tourist destination with numerous famous historic sites (such as the Imperial Palace, the Great Wall and the Summer Palace, etc.) within the city, and Hangzhou is a beautiful city with graceful lakes, mountains and gardens (such as the West Lake, Mountain Putuo and Xitang Water Town, ect.). It would be a nice trip if you combine the two cities together. China Highlights offers a great number of well-designed and customizable China tour packages, including China train travel tours, Beijing tours and Guilin tours. You can also contact us to design your own tour in China. The air route linking Beijing and Hangzhou is 1,200 kilometers long. The airport for embarkation or disembarkation can be Beijing Capital International Airport and Hangzhou Xiaoshan International Airport.  Every day, more than 20 pairs of flights are available between these two cities, and the service time is from 07:20 to 23:00 in Beijing and from 07:45 to 21:40 in Hangzhou. The length of the time for a voyage is several minutes longer than 2 hours. The full ticket price is 1150 yuan, and the price fluctuation depends on discount. You can search and book a flight ticket on China flights and check out the cheap China flights on China Highlights’ website.

Every day, there are 9 pairs of trains running between Beijing and Hangzhou, including 4 pairs of G trains, 1 pair of Z train, 1 pair of D train, 2 pairs of T trains and 1 pair of K train. G train has the fastest speed, and the length of the time for a voyage is about 6 hours and 30 minutes, and then followed by D train (about 10 hours), Z train (about 13 hours), T train (about 16 hours) and K train (about 20 hours). The ticket prices for the same categories generally are roughly proportional to the train’s speed. You can search the train schedule (including the stops along the way and the detailed ticket prices) on China Highlights' China trains.

Traveling between Beijing and Hangzhou, if you think the ticket price for a flight is too expensive, what’s worse, the train tickets you intending to buy are sold out, so the only choice is bus/coach transport. The coach is equipped with sleepers, and the approximate price for a ticket is 400 yuan (both for the voyage from Beijing to Hangzhou and from Hangzhou to Beijing). The length of the time for a voyage is about 14 hours. The stations for taking a coach are Muxiyuan Station (木樨园客运站) in Beijing and Hangzhou North Station (杭州北站) in Hangzhou.