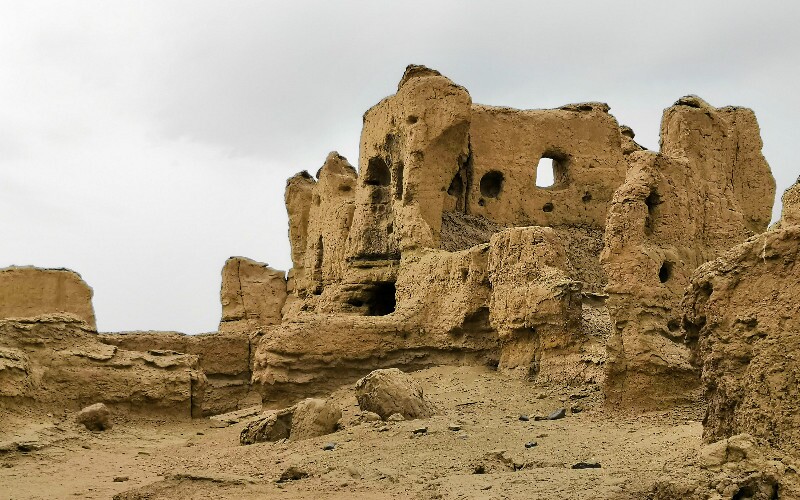 The region around Turpan has a history of interaction and conflicts of many peoples.

Recently discovered archeological evidence like the mummies found in the Xiaohe Tombs near the far western border of Xinjiang and in other places show that 3,000 and 4,000 years ago Caucasians lived in Xinjiang.

Since no Mongoloid mummies or Mongoloid people’s artifacts have been found that date before 1,000 BC, this is evidence that the original inhabitants of the area were Caucasians. It was thought that Caucasians mainly lived in Europe, so historians have been rewriting history based on DNA testing of certain mummies and the European style advanced Bronze-age clothing and artifacts that have been discovered.

It is obvious that Central Asia was linked culturally to Europe. Some mummies and their artifacts can be seen in the Xinjiang Uighur Autonomous Region Museum.

Little is known about the history of the area around Turpan between 1,000 AD and 0 BC. But when trade between the Han Empire and western countries started about 100 BC, it is known that the area turned into a fortress and oasis stop area on a Silk Road route.

Traders followed the base of the long ridge of the Flaming Mountains that goes east to west along the northern edge of the Turpan Basin.

About 30 kilometers or about 20 miles west of modern Turpan, a large fortress city called Gaochang was built along the trade route that eventually had a royal inner area, inner walls and outer walls. It is known that it was both multi-ethnic and multi-religious because both Caucasian and Mongoloid mummies have been found in the Astana Tombs about 4 kilometers north of Gaochang.

The Bezeklik Caves that are in the Flaming Mountains about 10 kilometers north was a religious site that showed paintings of both Caucasian and Mongoloid Buddhists. A Christian church was found outside the Gaochang walls. The Gaochang walls were made of rammed earth and adobe. The outer walls were about 11 meters or 37 feet high and formed almost a square. The outer wall extended 5.4 kilometers or 3.4 miles and the inner wall extended about 3.3 kilometers or 2 miles. In ancient times, the city was considered to be large. Mongols destroyed the city in the 13th century.

Jiaohe was another large fortress city that was built about the same time on a little islet in the middle of a river about 11 kilometers straight east of modern Turpan. The islet is about 1,650 meters in length and three hundred meters wide at its widest point. The river and the 30 meter high steep sides of the islet were its defenses. It is said that the Mongols destroyed the city in the 13th century also.

Skipping a lot of history, about 650 AD the Tang Dynasty conquered the area. Then the Tang were attacked by Tibet and lost much territory, and at about the same time Uyghur people took control of northern Xinjiang around 842 AD. Manichaeism was the main religion of these Uighurs. The religion is now extinct, but it was once one of the world’s major religions. Then some of the Uighurs adopted Buddhism, and others accepted Christianity.

In the 17th century, the Mongolian Dzungars established an empire over much of the region. But then the Qing Dynasty exterminated them, and it is thought that a million people were killed in a large region around Urumqi. The Qing Dynasty brought in people from other areas to resettle the area.

During the middle of the 19th century, there were several big rebellions of Muslims in Yunnan, Shaanxi Province and Gansu Province. These rebellions were encouraged by the initially successful Taiping Rebellion of people who had some Christian beliefs. In 1864, the Uighurs and non-Uighur Muslims started a rebellion in the area of Xinjiang. The Qing Dynasty quickly defeated them and retook most of the lost territory.