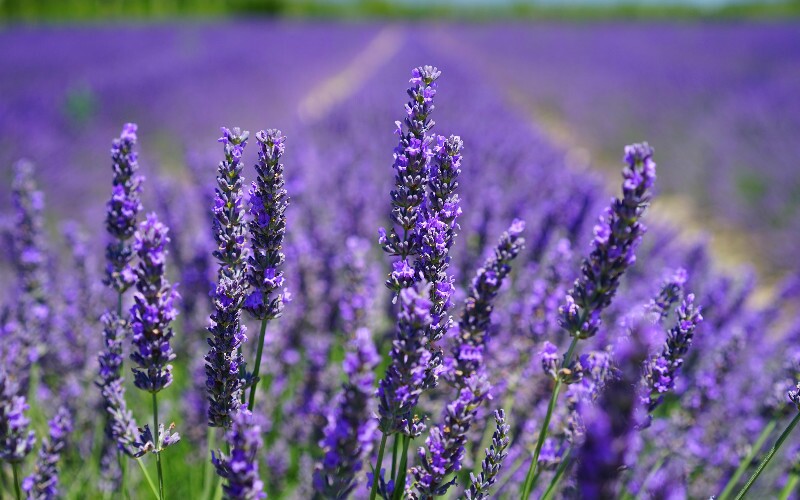 Huocheng County (霍城县), once a key town on the northern path of the Ancient Silk Road, served as the capital of Chagatai Khanate (察合台汗国) during the Qing Dynasty. It has long been the energetic center of Xinjiang Uygur Autonomous Region for politics, economy and culture. It has been producing lavender in large quantities for years and has become one of the most famous planting bases in the world, as famous as Provence in France. In fact, both regions lie at the same latitude, with similar climate and soil conditions.

The history of lavender planting dates back to the 1960s, several groups of agricultural planners first transplanted lavender from Beijing Botanical Garden to Ili Prefecture (伊犁地区). The transplantation succeeded and they soon began to enlarge the planting area to over 20,000 acres. It has now become the popular “China's Lavender Town”.

Generally lavenders bloom in early to mid June. If you visit here during this time, it will amaze you with its purple sea of lavender flowers, waving and dancing in the breeze. Be sure to arrive in peak season though, because by late June, most of the flowers will already be harvested.

Huocheng County, as a key town of the world-famous ancient Silk Road, has a long history and beautiful scenery. It is rich in tourism resources, like Huiyuan ancient city (the political, military and cultural center of Xinjiang during the Qing Dynasty); Daxi Valley (the only wild plum production base in Asia); the Tukai Desert (a desert in oasis); Keda La Prairie; the tomb of Timur Khan, the seventh descendant of Genghis Khan (the ruler of the Mongol people in ancient China); the site of the Temple of Longevity Hill (commonly known as Daxi Valley Temple, the largest Taoist resort in the Qing Dynasty); the national lavender production base; Sayram Lake (the most famous mountainous lake in Xinjiang) and the long grape corridor (a modern agricultural tourist area).

Hui Yuan Ancient City (惠远古城) is one of the famous historical cities in Xinjiang. It was the political and military center of the Qing Dynasty, from Emperor Qianlong (1711-1799)’s reign to Emperor Guangxu (1871-1908)’s reign. In 1762, in order to stabilize the border, the government officially established the position of Mingrui, the Ili General to govern the area both in military power and administration. The city was then named by Emperor Qianlong, meaning that the Qing Empire would extend its influence from over this area.

Huiyuan is divided into two parts, the older city and the new city. The former was invaded and destroyed by Tsarist Russia in 1871, while in 1882 the new city, the current Hui Yuan city, was built.

Later in 1793 its circuit was expanded and the city became the largest city in Xinjiang. It is known for its orderly buildings and streets. There are four vertical and horizontal avenues connecting with the four city gates, and a total of 48 lanes linking every street.

Hui Yuan Bell and Drum Tower (惠远钟鼓楼) was built in 1883 during the Qing Dynasty. It is located in the old city center, 7 km southeast from Huocheng County. The bell-drum tower is a four-story and three-eave wooden structure, with a total height of 23.76 meters. Each side of the first level is 22 meters long and contains an arched door, each 4.1 meters wide.

There are cross-shaped channels inside the building connecting with four avenues. The roof of the first level is covered with square wooden bricks, and painted with Taoist style designs. In the old days, bronze bells hung on each corner and sounded melodious in the wind. On the second floor sit a large bell and drum originally used for timekeeping. The striking of the drum was used to signal the advent of a new day and the striking of the bell the end of a day.

The Bell and Drum Tower was renovated three times, respectively in 1927, 1964 and 1981. It is now the only high rise traditional wooden construction with in Xinjiang.

Huocheng County is located in the open area of Ili Valley, featuring four distinct seasons. The winter lasts from November 22 to March 10, up to 109 days. Some areas within Huocheng, like the Fruit Valley, Sayram Lake Scenic Area and Daxi Valley, enjoying a snowfall of over 100mm every year. The county has short and cool summers, long and cold winters, with snow conditions which are suitable for skiing and other winter sports.

Huocheng County is located on the western border of Xinjiang Uygur Autonomous Region, in the wide area of northwest Ili River Valley, 653 km (406 miles) from the regional capital city of Urumqi and 47 km (29 miles) from Yining City (the capital of the Ili Kazak Autonomous Prefecture).