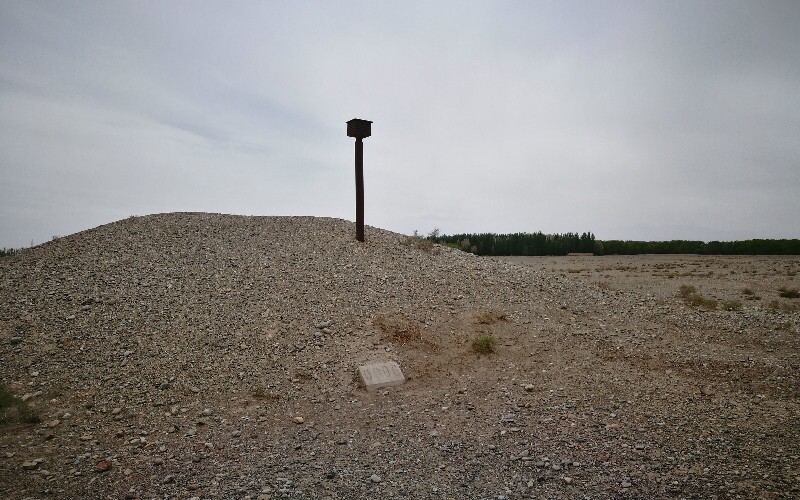 This fascinating site is included as one of the major sites China protects for its historical and cultural value. It's located in Altay, in Xinjiang autonomous area, NW China.

The cemeteries, also called the Shamirshak cemeteries and sometimes spelled Qiemuer'qiek, attracted attention in the 1960s when archeologists discovered early Bronze Age graves, the earliest known in this region.

A visit to this site offers an educational trip suitable to everyone interested in history, archeology and the origins of human culture.

Three cemeteries with many kinds of early artifacts and a collection of photogenic stone figures make this an important site to visit.

It has artistic and historical value and offers clues to the links between prehistoric cultures in the region. Many of the detailed stone figures remain in their original positions, standing as guardians to these ancient burials.

The pottery and grave goods suggest a history of interaction with populations of the Eurasian steppes and central China, offering clues to early Bronze age cultures, travel and commerce. Remains of wagons testify to the traveling nature of the people buried here, who probably came from the north, according to archeologists from the University of Sydney.

Artifacts from the site, including sheep knuckle bones that may have had ritual use, sophisticated stone vessels, decorated and plain pottery, pottery lamps, arrowheads and carved stone figures show the influences of different cultural traditions, offering information about the influences between neighboring groups in prehistoric times.

Age of the Graves

Some scholars believe the graves date from the middle of the second millennium BC, due to the results of carbon-14 dating. The artifacts found at the cemeteries represent points on a timeline during the area's use.

Differences in grave goods, body positions and types of graves indicate different dates or cultural influences. Some of the graves had been robbed, and the original excavation notes are lost, making interpretation challenging.

The cemeteries include pit burials dating from the Iron Age. One grave in this area contained a bronze arrowhead with a distinct triangular shape that dates it to the 1000 BC, the Australian archeologists reported.

The stone statues in the shapes of people are called anthropomorphic stelae by archeologists, meaning they are representations of the human form used for commemorative purposes. Many cultures, including the ancient Egyptians, used stelae to mark important sites or record significant events.

The stone carvings display a wide variety of facial features. Some represent women and others represent men. Carving styles include three-dimensional figures and engraved flat surfaces. Like the burials, the figures date from the Bronze Age and Iron Age.

One group of figures stand tilting from their long vigil, their simple round faces still looking out over the graves and the bare, flat land surrounding them.

The stark landscape and the lines of sadness in the statues' expressions makes the place timeless and ancient, laden with the lasting sense of human grief. The stone bodies have monolithic simplicity, like the sentries of Easter Island, with cylindrical trunks and wide bases.

The 32 graves excavated in 1963 are at the northern tip of Xinjiang, in the Qiemuer Qieke river valley. The river valley extends north to south through the district.

The site is situated along the Altay mountain foothills, giving a dramatic backdrop to the ancient site. To avoid confusion, it's helpful for travelers to know the name of the mountains and city is also spelled Aletai. The spellings of many Chinese words and place names often appear in more than one version in English.

Altay features low rainfall and a cold climate in the winter, with freezing temperatures. Summers are warm, and the best time to visit, with an average temperature of 22 degrees C or 71 degrees F in July. The evenings remain warm, providing a comfortable climate for enjoying the area.

China National Highways 216 and 217 are primary traffic arteries, and the city has the Altay Airport, offering convenient access to the Qiemuer Qieke stone figures and graves. The airport is nearly 2,500 feet above sea level and has one runway.

What to Wear and Bring

Bring a light jacket to the cemeteries on cooler days, a hat for protection from the sun, and wear comfortable shoes to fully explore the site. The cemeteries and stone figures are spread out, so dressing comfortably makes the excursion more enjoyable.

Some visitors may find a walking stick useful. Although the terrain is fairly flat, much of it is plain dirt with scrubby growth, making the footing uneven. Walking shoes or hiking boots with flexible soles and good traction work well for exploring the area.

The low humidity can increase thirst, so it's best to carry bottled water for excursions.