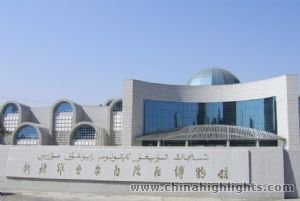 If you are interested in learning about Xinjiang and its history, one of the highlights of Urumqi is the Xinjiang Uygur Autonomous Region Museum (Qu Bowuguan,新疆维吾尔自治区博物馆). It is one of Urumqi’s three main historical museums. There is also a geological and paleontological museum in the city. The Autonomous Region Museum is famous for having the artifacts and mummies of Caucasians who lived in the region between 1,500 and 4,000 years ago. There is also a collection of silk articles and other artifacts from various eras of history, as well as written materials in different languages. The museum also instructs on the customs of the ethnic groups in the region. What most tourists want to see are the mummies and their artifacts. They are unusually well preserved. Until two decades ago, this culture was hardly known to historians and archeologists, and their history and origins are still mysterious. The Xinjiang Autonomous Regional Museum houses the mummies and their artifacts that are some of the most significant archeological discoveries in a hundred years, and it is a place to learn about the region.

The many Caucasian graves and bodies that have been found around the region are mysterious because little is known about them, and it isn’t clear whether they were all descended from the same groups or tribes. The bodies and artifacts of Caucasians date from the Bronze Age 4,000 years ago to the Silk Road era 1,500 years ago. Maybe some of the later mummies were simply travelers or traders in the area. It is clear that there were settlements of Caucasians about 3,000 and 4,000 years ago that predate by about 1,000 years any evidence of Mongoloid people. This suggests that the original settlers in the region were Caucasians. The earliest inhabitants had a culture like a European culture. The Caucasian people who lived during the Silk Road era from about 1 AD to 1,000 AD wrote in an Indo-European language called Tocharian. Some texts and inscriptions have been found as well as paintings of Caucasian people. 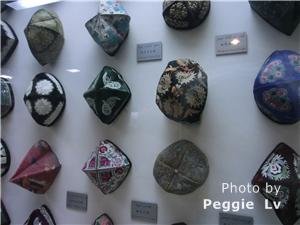 The three or four mummies and the artifacts that are displayed are thought to be part of one of the biggest archeological discoveries of the past hundred years. They shed new light on the ancient history of Eurasia. It wasn’t known that this culture existed until about twenty years ago. It was thought that Caucasians mainly lived in Europe. DNA testing on certain mummies showed that they were related to Scandinavians, and their woolen clothing was found to be similar in make and style to clothing from the same period in Europe. The blond mummies look Scandinavian. There are also many red and brown haired mummies. Red hair was thought to be typical of Celts but not Scandinavians. The clothing and artifacts that have been studied in the last few years show that their technology was more advanced than thought possible for Asia at that time. So in the last few years, historians have had to rewrite the history of Eurasia. It is obvious that Central Asia was linked culturally to Europe. 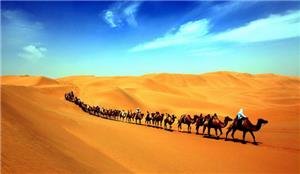 The silk Road is a very important trade route in ancient time.

Perhaps it was Caucasian people who supplied jade to the Shang Dynasty, since the jade found in a Shang Dynasty (1766-1122 B.C.) tomb is known to be from an area of Xinjiang near Tibet. It is known that Chinese highly valued jade. Jade was considered even more valuable than gold or other gemstones, but Europeans and other people to the west didn’t regard the mineral so highly. Perhaps before there was a “Silk Road” trade for Chinese silks there was a “Jade Road.” However, not much is known about these Bronze Age people. The government has been reluctant to allow archeological or DNA information be known about them. It is said that many tombs that have been found remained unopened and that sites and very ancient cities that were open in the 1990s are now closed off to tourists.

More is known about the later Caucasians in Xinjiang who are often called Tocharians. It is known that Caucasian Tocharians lived along Silk Road routes and played a role in converting China to Buddhism. They built Buddhist temples and cities in Turpan and along the Silk Road. They apparently left behind documents and samples of writing that shows that there were two similar Indo-European languages used in the area.

One thing that is interesting about the mummies is how well dressed they are. The clothing is more colorful and looks more comfortable than what people wear nowadays. You may see a mummy called the Yingpan Man who was 1.8 meters tall (6 feet tall) and died around 400 or 500 AD. He had light brown hair. At the time he died, the Silk Road was still used. He has a robe that is said to be from the Eastern Roman Empire. His clothing is said to be about the most expensive and best preserved clothing that has been found from his time anywhere in the world. People suspect that he was rich. The clothing that has been found so far on the Caucasian mummies of various eras is beautiful and very well made, and their artifacts are decorated intricately. Perhaps they were buried in their best clothing and some of their best personal objects were put in their tombs. There are gold objects on display, and gold foil is on the Yingpan Man’s facemask. 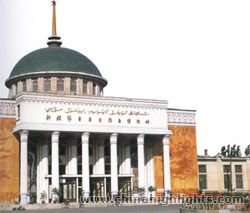 It is said that the Xinjiang Uyghur Autonomous Region Museum was opened in 1953 in People’s Park. In 1962, a Russian-Stalinist style building was built that had a dome like that on a mosque. Originally, the main attraction was various Silk Road-related artifacts such as silk articles from various areas and eras. But then in 1988, Victor Mair who is now a professor of Chinese language and literature led a tour of the museum for the Smithsonian Institution. The Smithsonian Institution is an American academic and historical society. During the tour, he found a room full of mummies he had never seen before.

He said, “I had been to the Xinjiang Uyghur Autonomous Region Museum in western China many times before. But that time, they had a new exhibition hall. It was behind some curtains. It was very dark. When I went through with my group, there was a whole room full of mummies that had not been there before, and I was stunned because I was not expecting them and also because these mummies were all Europoid, looking like Europeans. They were Caucasoid. They also had very wonderful textiles they were wearing and hats and all kinds of tools that made me think they were a lot more advanced for the years they were saying. They (museum) said these mummies were Bronze Age, 3,000 to nearly 4,000 years ago. And I thought, ‘This can’t be!’ They have all of this wonderful technology, and they are so well-preserved.” He said that he at first thought that the mummies were fake mannequins or wax-work figures. 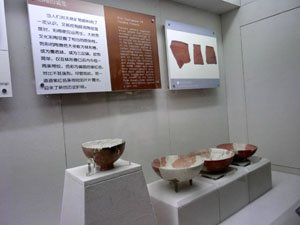 This is how an intriguing archeological discovery started. It was known that European-looking mummies and artifacts had been found in the region much earlier, even in the 19th century, and explorers and archeologists had taken pictures of them. But Mair was able with some difficulty to study some of the material and corpses and get a few DNA samples that tested to show a genetic relationship to Scandinavians. Some people said that the light colored hair and white skin of the mummies might have been due to chemical bleaching as the corpses mummified. But this can’t be true because if there was such a bleaching process, their clothing and the materials buried with them would have been bleached or destroyed as well, but the clothing is well preserved and brightly colored. The intricate patterns are clear. Their technology was more advanced than was thought to be possible for Eastern and Central Asia at the time, and this is mysterious also.

Even the size of the Caucasians is mysterious. Yingpan man who dates to about the 5th century AD is about 1.8 meters tall (a little more than 6 feet). This is unusually tall because it is thought that ancient people were generally short. The other Caucasian corpses such as more ancient Cherchen Man are also unusually big. Why were they so big? Did they have an unusually good diet? There is an ancient Chinese document that described “giants” living in the area of Xinjiang.

An older corpse dating to about 1,200 BC had fabric that experts on Bronze-age clothing say is similar to the clothing in Western Europe from about the same time. The fabric looked like Celtic plaid. The weave exactly matched cloth found with the bodies of thirteenth-century-BC salt miners in Austria. Researchers have found similar patterns used for decorations, similar clothing style, and apparently the same method of manufacture of garment using the same type of loom. The dyes and fabrics are very well preserved so that the clothing is very brightly colored and the intricate designs in the clothing are clear. This shows that Bronze-age Europoid people had methods of dying and weaving very brightly decorated clothing in a rainbow of colors. People didn’t know that. They apparently dressed very well and fashionably and put a lot of emphasis on style and being brightly and beautifully dressed. Perhaps if more corpses are brought to light and their DNA information is revealed, the origins and way of life of the people could be discovered.

A new building has recently opened on the same site. The building is beautiful and has a blue glass front with what look like white cages or huts on the sides. The renovation is said to have cost 13 million USD, and ten new halls were built. However, the museum sometimes closes unexpectedly, and the exhibits move. The three or four mummies that are shown in the museum travel around the world and are a popular attraction wherever they go, and they often get in the news. So if you go to the museum, you might not be able to see them. 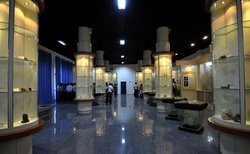 Nearby in Urumqi, there are three other museums. There are two other historical and cultural museums and a geological museum. The Xinjiang Silk Road Museum (新疆丝绸之路博物馆) is at No. 160 Shengli Road and is next to the Grand Bazaar that is also called the International Bazaar. It takes up the 4th and 5th floors of a building. The emphasis seems to be mainly on the history of ancient Han and Tang Dynasty civilization along the Silk Road in Xinjiang and on the present cultures of the various ethnic groups in Xinjiang. The other museum is called the Urumqi Museum (乌鲁木齐博物馆). It is located at South Nanhu Road 123 (南湖南路 123). The Xinjiang Geological and Mineral Museum is located at Youhao Road and is one of China’s largest geological museums. If you are interested in rocks, fossils, minerals and crystals or in understanding the geology and natural resources of Xinjiang, that is the place to go. It has four exhibition halls. One deals with the minerals of Xinjiang where you can see beautiful crystals and minerals, one deals with geological science, and one deals with how minerals are used.

If you want to go on short excursions in the area of Urumqi to understand the ancient history of the desert region, the mainly Uighur city of Turpan is only about three hours away and around it are several major ancient sites including those that relate to the Tocharians. To experience the various ethnic cultures, you can go to the South Pasture area on Nan Shan to see Kazakh shepherds with herds and the Kazakh tourist industry and go to Turpan to see Uighurs and the karez underground irrigation tunnels that they maintain to make Turpan a rich agricultural region.