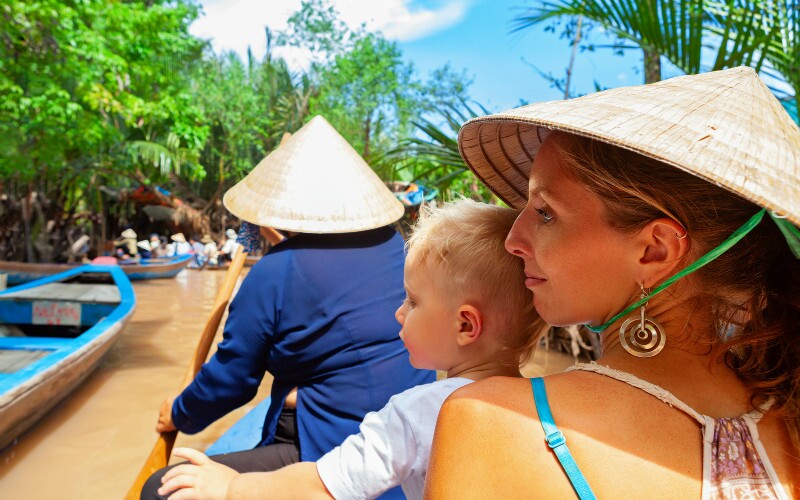 Vietnam Travel Guide - How to Plan a Trip to Vietnam

Vietnam is a long and narrow Southeast Asian country that has several climate zones and more than 3,200 kilometers or about 2,000 miles of coastline that stretches from China to far south of Bangkok. The climate is generally warm or hot, and this combination of climate and long shoreline gives the country a potential to be a major beach resort area. Vietnam also owns lots of small islands both along the coast and in the South China Sea, and there are large natural park areas. A record 5,000,000 tourists visited the country in 2010. Many backpackers come and travel around for about 250 or 500 USD a month. The food is cheap and good and different than Chinese or Thai food, the accommodations are good, but the country is known for being sort of dangerous because of crime and tiring because of constant scamming and people rudely selling stuff. However, there are also new resorts to stay in. So Vietnam is a mixed bag, but it is being developed into a major tourist resort destination.

Vietnam has about 90 million people in its territory. It is about 330,000 square kilometers or about 130,000 square kilometers in area. It is big country in terms of population because it is listed 13th in the world in terms of population, but it is only a medium-sized country in terms of land area. It is smaller than Thailand. Its biggest city is Ho Chi Minh City, and the biggest river is the famous Mekong River that has a big delta that is 40,000 square kilometers or 15,000 square miles in size. About 40 percent of the country is covered by jungle or forest, and there is a natural World Heritage Site at the Phong Nha-Ke Bang National Park. There are six biosphere reserves. The country is known for its diversity of plants and animal species.

Vietnam is a relatively poor country, so it is common to see a whole bunch of bicycles. There are lots of poor people who struggle to make a US dollar a day. The cheap hotels are known for being clean and adequate. The country is developing quickly, and it is thought that Vietnam may one day be economically powerful because there are a lot of resources and a large population.

Because of the beaches and the mountains, you can enjoy the tropical climate and also visit mountain villages, forests and park areas above 2,000 meters in altitude. The tourist industry is still learning to cater to Westerners, but if you are traveling on a low budget, you can travel around in groups and explore a country that isn’t yet developed. If your budget is small, it is best to travel with companions for safety and comfort, especially if you are female. Hue is an area popular with tourists because of an abundance of old architecture and palaces. The Furama Resort is probably Vietnam’s most famous 5-star resort that is known for the quality of service and its location on China Beach near four World Heritage Sites including Hue.

The three regions of Northern, Central and Southern Vietnam each have their special attractions. In the north, many people may want to visit Hanoi that is the capital city of the country. There are many ancient sites and modern monuments and museums to visit. Probably, most Western tourists will want to visit the beaches and the resort areas in Central and Southern Vietnam. The most famous of the luxury resorts is Furama Resort near Danang in Central Vietnam. Central Vietnam also has the old capital of Hue and four of the country’s six World Heritage Sites. There are several good beaches along the coast there along with other luxurious resorts near Danang and Hoi An. In Southern Vietnam, the main attraction is Ho Chi Minh City, the Cholon Chinatown, and the beach and national park attractions. Several beaches in Vietnam are called the best, but for backpackers and people looking for relaxing, non-glitzy and beautiful natural areas to hike and swim in, Southern Vietnam has the best natural beach areas. Here are attractions in Northern Vietnam, Central Vietnam, and Southern Vietnam.

It is interesting that the best travel seasons in the three regions complement each other. It is best to visit the sites in Hanoi in the fall, to enjoy the beaches and World Heritage Sites around Danang from May to September to avoid the monsoon season, and to go to Saigon and the beaches in Southern Vietnam from December to April when the weather is usually hot and dry.

Have you come up with the idea of traveling to Vietnam, but don’t know how to plan it? How to Plan a Vietnam Trip may help your idea to go a bit further.