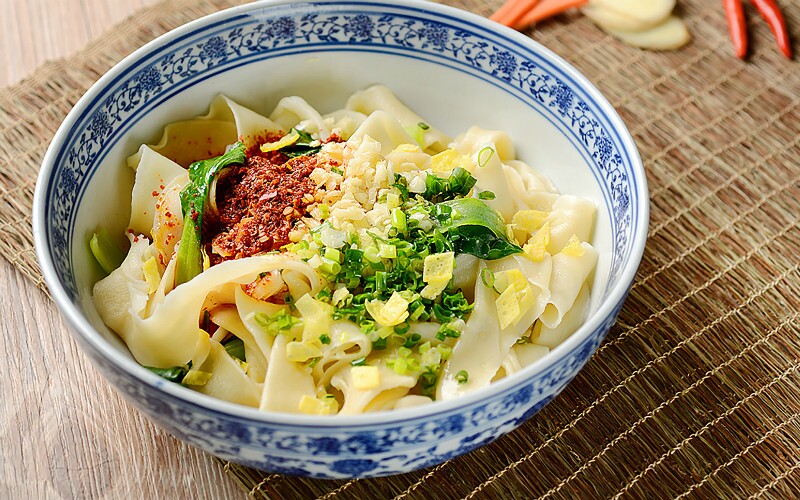 Hele (Noodles with chicken and duck)

Hele ( literally harmony) is mainly made of noodles, chicken and duck. First, press the non-fermented flour into the round thick noodles (about 5MM diameter). Then boil it. Later, put the noodle in a large pot of chicken and duck soup with chicken, duck, sweet garlic, carrot, Chinese chives and meatball. A small amount of chili oil will make the noodles more delicious.

Concerning the name of the dish, there is a folktale in Weifang. Once up on a time, there was a rich man in Weifang. He had two sons. The wives of the brothers often quarrelled with each other. The two brothers were influenced by their wives and became inharmonious and even fought some times. The father can not help but cook a dish for his sons and their wives which they had never eaten before. His sons and their wives all like the dish very much and asked what the it was called. The father told them that the dish was called Hele which presented his wish for the harmony of the family. His sons and their wives all felt ashamed of their behaviors. And they became harmonious ever after. The dish has been popular since then.

The word "huoshao" originates in the dialect of Shandong which refers to sesame seed cake. The most delicious is Chenghuang Temple's. Huoshao Stuffed with Meat looks like a bulging air sac with a lot meat in the middle. The stuff is mainly pork with the sauce made from the special recipe of Weifang people, mushrooms, dried shrimp, and sometimes shellfish.

It originated from a folk morning market during the reign of Emperor of Qianlong years [the fifth emperor of Qing dynasty (1368AD-1911AD)]. At that time, the peasants who go the market of Weifang city to sell goods from far away counties could not have hot meals to eat. Zheng Banqiao, the officer of Weifang send someone cooked meals in a big iron pot for the peasants. Because the pot is without lid, people called it "Chaotian Pot". The pot has become popular since then. People first cook pork, meatball, dried bean curd in boiling water first with a large pot, then add some cilantro and soy sauce, and prepared pancake. Customers can sit around the pot and make it themselves.

Tips: Chongqing Chaotain Pot Restaurant is the most famous in Weifang. It is located at the juncture of Shengli Street and Wenhua Road.

It is a famous dish in Weifang with a long history, and very popular with people because it is tasty, soft, nutritious but not oily. It ranked as one of the most famous Shandong dishes in 1997. It is served in almost every restaurants of Weifang, about thirty yuan for one dish.