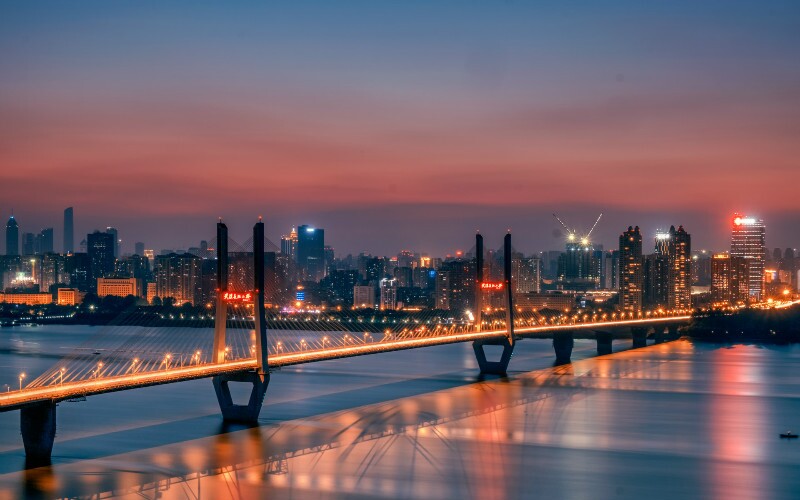 First Bridge over the Yangtze River

A tourist destination is the first bridge that was built over the Yangtze River. It was built with Soviet aid in 1957 and is a two floor bridge. On the top floor, vehicles travel, and trains travel below. It was built near the place where the Han River merges with the Yangtze, and it was built between two hills where the river is narrower than it is in the rest of the city area.

It is quite big and has a total length of about 1.5 kilometers (almost a mile), and the main portion over the water is about a kilometer across. The bridge has a four lane highway. There are 8 abutments and 9 arches in total. Every arch has a span of 128 meters (about 420 feet).

For a good walk and to see the view, you can walk or jog across the bridge. The view is interesting at night. It is almost 100 meters between the top deck and the river below, and if you go across on foot, you can see the buildings below you and the ships on the river far below. On the Hanyang side, the bridge leads to a park area. You can see a tall antenna tower. Seeing the river from the bridge will help you to appreciate the size of the river. You might think about the long history of travel on the river. The road on the Hanyang side leads to another bridge nearby that crosses the Han River to Hankou. These two bridges are the city's main link between the three districts. The bridge was considered very important for China's development.

For the first time, the roads and railways of northern and southern China were connected. Before it was built, train cars or vehicles were ferried on boats. It was built in the very center of the city because it is near where the two rivers meet. But the Yellow Crane Tower was destroyed to make way for it since it stood on the hill on the Wuchang side that they needed for the bridge's foundation.

wuhan Wuhan Travel Guide - How to Plan a Trip to Wuhan