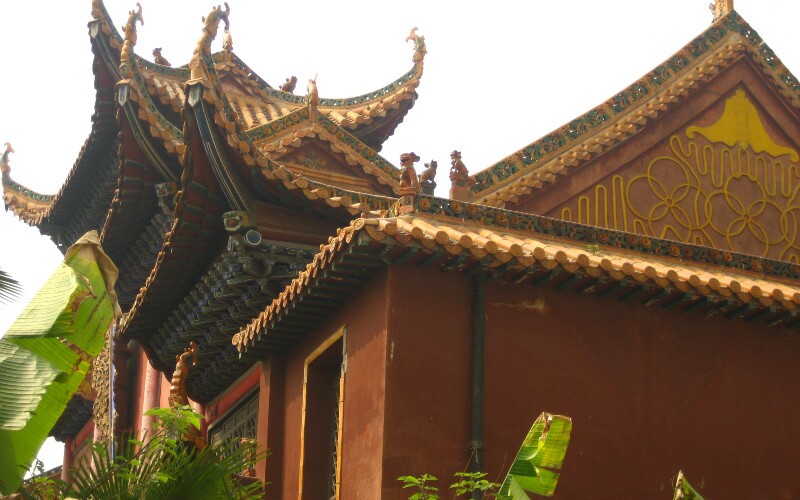 Guiyuan Buddhist Temple covers an area of 4.67 hectares. It is known for its perfect buildings, ingenious sculptures and rich collections. Many foreign tourists have successively visited the temple to view and admire it, including important political figures from other countries, such as King Sihanouk of Kampuchea, the American Secretary of State Henry Kissinger, the former Prime Minister of Singapore Li Guangyao, and the Japanese Prime Minister Nakasone Yasuhiro. Guiyuan Buddhist Temple is composed of three distinctive courtyards: the north courtyard, the central courtyard and the south courtyard, and owns three groups of buildings: the Depository of Buddhist Texts，the Great Buddha's Hall and the Hall of Arhats.

The Depository of Buddhist Texts is the main building in the north courtyard. It is a two-storied pavilion building with five rooms on each story. It has a height of 25 meters and big ridges with beast head carvings.

The whole building, the doors and the windows were painted and carved with exquisite, spectacular, splendid and magnificent patterns and sculptures. It is the only ancient building made from wood and bricks in Wuhan.

Many Buddhist relics are preserved there. In addition to Sutras, there are also Buddhist statues, Buddhist articles, stone sculptures, wood carvings, rubbings from stone inscriptions, foreign books and records.

The Hall of Arhats is a novel art treasure house. It is the main building in the south courtyard. It was built in the Daoguang period of the Qing Dynasty, destroyed by war in the 2nd year of the Xianfeng period (1852 AD), and rebuilt in the 21st year of the Guangxu period (1895 AD). By far, it has a history of more than 100 years.

The architectural layout of the hall is like the Chinese character “田” which means “field” in English. The four pieces of “口” of the character “田” represent four small courtyards in the hall. They provide enough ventilation and lighting to the large and deep hall.

The Arhats are arranged according to the layout of “田”. Although there are more than 500 statues in the hall, it does not look crowded. This kind of layout is ingenious and rational. The Great Buddha's Hall is the main building of the central courtyard. It was originally built in the 18th year of the Shunzhi period of the Qing Dynasty (1661 AD), and was maintained many times later on.

In the hall, a sitting statue of Shakyamuni is enshrined. Statues of his two disciples, Ananda and Kasyapa, are on the left and right. In front of it, there are statues of Skanda and Maitreya.

At the back of it, there is a standing statue of a barefoot Avalokitesvara. Statues of a dragon girl and a boy are standing on Avalokitesvara's left and right. Behind her, there is an 8 chi (1/3 meter) high clay sculpture of a cliff.

If you look up, you can see that the sleeves of the Avalokitesvara statue seem to be fluttering, as if she is coming to you on surging waves. This increases the appeal of the religious art. In addition, the altar in front of the statue is a rare wood carving treasure.

“Counting the Arhats” is interesting. The legend says that if you count from a random Arhat in a given direction to the one that matches the number of your age, the identity, expression and action of this last Arhat can show your fate. This activity adds a lot of fun for people who visit the Hall of Arhats.

Undoubtedly, counting the Arhats is nothing more than a way of praying for good fortune. People count from a random Arhat in a given direction according to their ages, and then ponder over the title, action, and expression of the last Arhat to see whether they can understand some of the philosophy of life.

Worship the God of Wealth in the Evening

In addition to counting the Arhats in the Hall of Arhats during the Spring Festival to predict good and bad fortunes for the coming year, there are some other folk activities in the Guiyuan Buddhist Temple.

Guiyuan Buddhist Temple is closely related to the local people's lives. People go there to burn the first bunch of incense for the coming year and to pray for auspiciousness and safety on the evening of every lunar December 30th or on every lunar January 1st.

On every January 5th, people visit the Hall of the God of Wealth in the Guiyuan Buddhist Temple to worship. On these days, both the gong and drum team and the lion dance team will perform there. Both Buddhism believers and non-believers will flood into this place. It is quite crowded and bustling around the temple.

These festivals, which combine Buddhism and folk customs,have become popular festivals. During these festivals, people vent their bad moods and pray for good luck for the coming year.

wuhan Wuhan Travel Guide - How to Plan a Trip to Wuhan