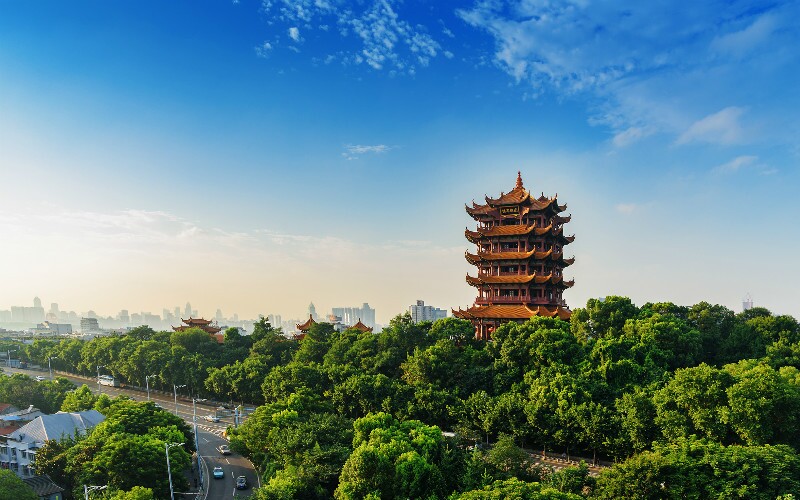 The present Yellow Crane Tower is a modern building that was built in the 1980s after the old Yellow Crane Tower was destroyed to make way for the Changjiang River Bridge that was completed in 1957. The original site was on a hill next to the river. The new building was built on a hill about a kilometer away from the river. The original building was a pagoda made of wood, and the new one is pagoda-style building made of concrete. It is a part of a small park area on the hill called Snake Hill Park, and there are some other buildings there you can visit such as one that has inscriptions of poems that were written by Chairman Mao. There is a teahouse where you can buy refreshments and listen to performances of traditional Chinese music.

The traffic that crosses the long bridge over the Yangtze River between Hanyang and Wuchang passes by the new pagoda-style building, so you can see it on the small hill from the road if you look towards the top of the hill as you pass by. From the top of the tower, you can get a good view of the city. It is about 50 meters high and has 5 stories. There are some telescopes for tourists to use. The Museum of the 1911 Revolution is at the bottom of the hill.

A tower called the Yellow Crane Tower was built about 1,800 years ago. It was a famous building in China. An ancient poem named "The Yellow Crane Tower" was written by Cui Hao, and many Chinese can recite it. So, the new park is a popular tourist destination. The original building was destroyed ages ago, and other buildings were built on the original spot and also destroyed. Some sources say that the last wooden building was built in the late 1800s.

Transport: Going to the Snake Hill Park is easy. You can take 703, 715 that is often a double-deck bus where you can see the view, and many other buses. You can see Snake Hill Park from the Changjiang River Bridge. It is less than a kilometer from it, and Wuluolu Avenue goes by it. The Wuluolu Avenue is the big main avenue in Wuchang that meets the bridge, continues on past many hotels and temples, and passes by several universities and East Lake Park area.