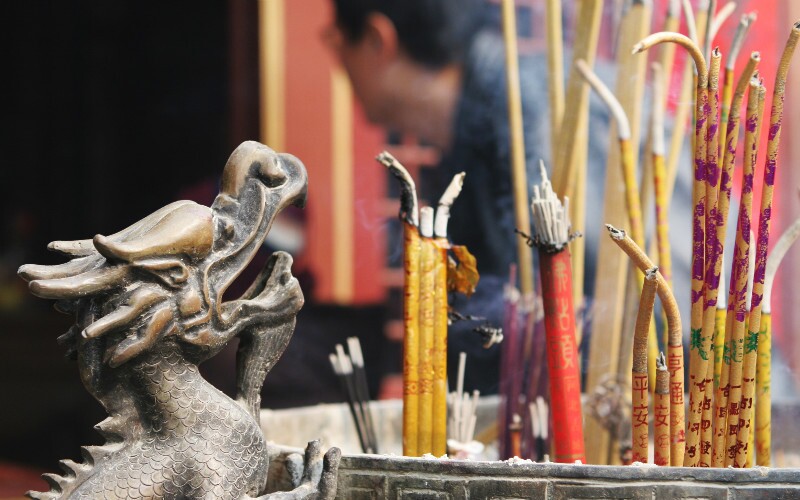 The Daxingshan Temple (大兴善寺) was an important temple during the Western Jin Dynasty era (265-316). It is said that South Asian scholars worked there to translate scriptures. The buildings there now are mainly of modern construction. You can see the Devajara Hall, the Mahavira Hall, a Mountain Gate and other architecture.It is said that the park is beautiful and quiet and that serious Chinese worshippers use the temple. Few tourists go there.

Buddhism is thought to have existed before the Qin Empire destroyed it. Then during the Han Empire period through Silk Road contact, the religion was reestablished. It is said that during the Jin Dynasty era (265-420) in the state of Later Qin (384-416) that controlled the area around Chang'an or modern Xi'an, about 90 percent of the people became Buddhists. This was thought to be mainly through the rule of Emperor Yao Xing who was taught by a monk named Kumarajiva who was an important translator of Buddhist scriptures into the local language. He and his disciples worked at translating scriptures at Caotang Temple about 30 kilometers or 25 miles southwest of Xi'an.

When the Tang Empire built its capital, the Daxingshan Temple was enclosed within the city walls of Chang'an. It is said that the temple was destroyed in the 840s during the Tang era. It was rebuilt during the Qing Dynasty era in 1725. It was rebuilt or restored again in 1956 and 1983. The architecture now is Qing-era style. After 1956, the temple was used by Tibetan Buddhist monks. Their worship ended in the Cultural Revolution. The area is now part of a public park, and pious Buddhists go there to worship.

Nearby Attractions: This temple has a lot of temples, Tang-era architecture, and museums around it within about 4 kilometers. The Qinglong Temple and its park is only 900 meters to the north. It is known for its cherry trees and its influence on Japanese Buddhism. There are also a lot of other sites including the Bell Tower, Drum Tower, the Shaanxi History Museum, the Beilin Museum, the Big Wild Goose Pagoda, and the Small Wild Goose Pagoda. To see another place where scriptures were translated a little later, Kumarajiva (344-413) worked at the Caotang Temple about 30 kilometers or 25 miles southwest of Xi'an. China Highlights can help you design a trip to this and other places.