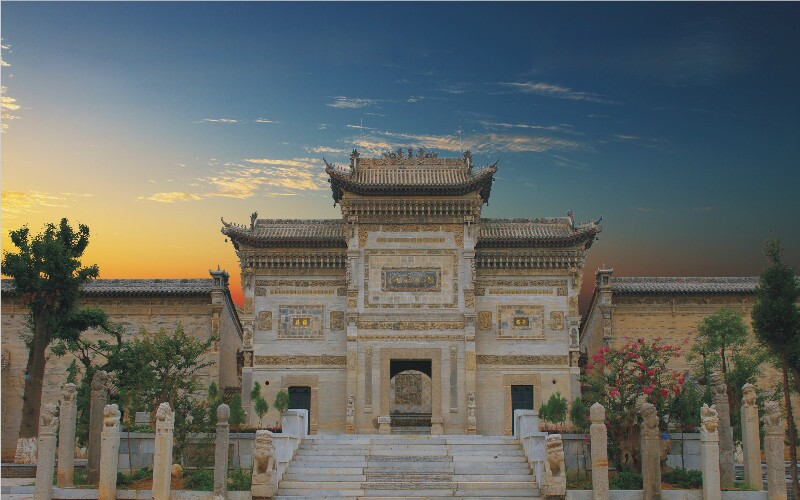 Guanzhong Folk Art Museum is the leading center for the study and enjoyment of Shaanxi folk art, as well as the work of Chinese folk artists. The museum has gone on for years to play a central role in fostering interest in folk artists nationwide. Today, as owners of one of the country's largest collections of such hard-to-classify works, it acts as an indispensable interpreter, promoter and protector of folk art. Visitors can not only have a full view of folk art relics, but also experience traditional folk life, enjoy performances of folk sacrifice. It will continue to serve as a base for national cultural heritage education, preservation, interpretation, research, education in patriotism, movie production, and in the demonstration of national cultural industries.

Guanzhong Folk Art Museum is located in Guanzhong, the hinterland of China which once served as the capital of thirteen dynasties. The piece of land has given birth to the Ancient Chinese agricultural civilization. With profound historical and cultural heritage and rich folk customs and practices as its base, Guanzhong Folk Art Museum preserves the folk architecture, social interactions and cultural life of people who lived in the Shaanxi area from about 3rd century A.D. to the early 20th century. It covers a construction area of 501 Mu (82 acres) and is renowned for its folk art collection, restoration, research and interpretation.

Since the late 1980s, Mr. Wang Yongchao, the founder of the museum, and his team have began to collect, restore and preserve more than 33,600 pieces of folk relics, consisting of carvings in stone, wood and bricks, well-known paintings and calligraphies, remains of old folk residences, relics of daily life and folk customs in the Guanzhong area from the Zhou, Qin, Han, and Tang dynasties. The museum has also collected and restored the ruins from 40 old residences dating from the Ming and Qing dynasties, a total of more than a thousand rooms. At the same time, the museum has sorted out a large quantity of intangible cultural heritage items, such as local operas, rites and customs, and traditional handcraft workshops. Currently, the museum is separated into four theme display areas (nine serires), namely Folk Arts, Guanzhong Local Residences, Folk Customs, and Paintings and Calligraphy by Celebrities. They are further classified in nine sub-categories and intensively reflect from different perspectives the historic nature of folk arts, aesthetics, farming activities, residences, and customs of peoples with various ethnic backgrounds in different historic periods in the Guanzhong area.

Guanzhong Folk Art Museum is extremely well-known for its over 12,000 collections of stone carvings, including hitching posts, drinking troughs, stone men, stone lions, stone turtles and other stone works of art. Among these, tens of thousands of hitching posts, with distinct carving patterns and styles can be rated as the masterpiece of the museum. Most of these hitching posts are made of bluestone and embodied the power and beauty of Chinese folk culture, fully proving the continuous campaign, migration and cultural integration among different ethnic groups in China's northwest region during the Song and Ming dynasties. They are not only the first-class art treasures in China, but also precious evidences to study national history of Northwest China during the Song and Ming dynasties. They represented the essence of Chinese national culture which witnessed the harmonious co-existence and cultural exchanges among different ethnic groups in the northern part of China for thousands of years in history.

Another noteworthy part is the folk residence of the Ming and Qing dynasties. Inside the museum lies a street named Ancient Residential Street, which has stored and preserved more than 100 typical residences transferred and rebuilt. For example, the residence of Sun Pi-Yang, a veteran statesman who have served three emperors in a row during the Ming Dynasty and the residence of Yan Jingming, a renowned scholar in the Qing dynasty. Besides, a large number of exquisite brick and stone carvings also have a very high aesthetic and ornamental value.

The museum has collected more than twenty kinds of folk opera, such as the almost-forgotten Wan Wan Qiang (a local opera in Shanxi province, whose precursor is the shadow play), Daoqing Opera (a local opera with a style of ballad-singing), a, Yangko (a popular rural folk dance in China), gongs and drums (traditional percussion instruments), Ansai Yaogu (Waist Drum), She Huo (folk art performance given on traditional or religious festivals), monodrama (a one-man show), Bangzi (wooden clappers with bars of unequal length), shadow play and Shanxi Opera.