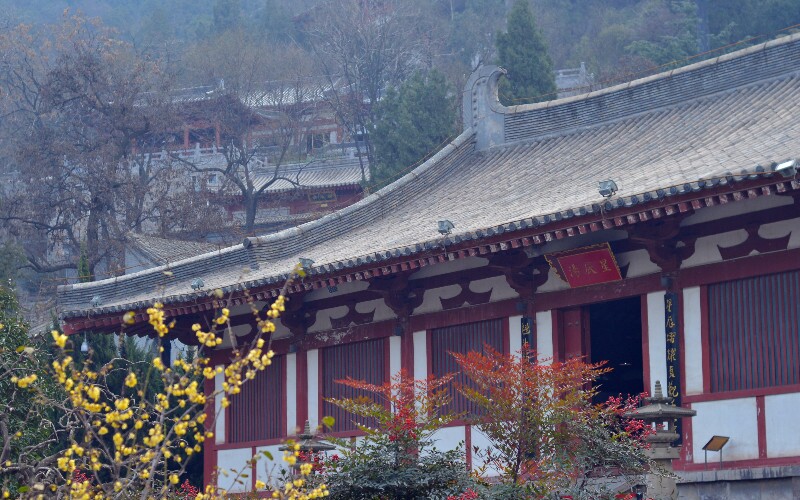 Huaqing Palace a famous imperial bathing pool and various palace complexes. It is a National Cultural Relic and one of China's Hundred Famous Gardens.

Huaqing (Hua means brilliant, Chinese or flowery; qing means pure or clear) Palace is located about 35 kilometers east of the city of Xi'an, at the foot of Li Mountain. The present day site is only a small part of the Tang Dynasty Palace, covering an area of 85,560 square meters. Entering by the west gate to the hot spring, you will see Nine Dragon Pool, Lotus Flower Pool and Frost Drifting Hall. All these structures were rebuilt in 1959 according to the Tang architectural style.

Li Palace was first built during the Western Zhou Dynasty (1045 – 256 BC) at the foot of Li Mountain, a branch of the Qinling Range, which divides north and south Shaanxi. Standing 1,256 meters high, it is covered with pines and cypresses and looks very much like a dark green galloping horse from a long distance away. In ancient times, Li meant a pure black horse, and this is how the mountain and then the palace got their name.

In the Qin Dynasty (221 – 206 BC), a stone pool was built and was given the name Li Mountain Hot Springs. The site was enlarged during the Han Dynasty (206 BC – 220 AD), and was once again named Li Palace. During the Tang Dynasty (618 – 907), firstly Emperor Taizong ordered enlargement of the palace. Then Emperor Xuanzong, his successor, then had a walled palace built around Li Mountain in the year of 747. It was then known as Huaqing Palace, or Huaqing Hot Spring, because of the hot spring there.

The Tang Emperor Xuanzong used to spend his wintertimes at Huaqing Palace in the company of his favorite concubine Yang. Yang, who was recognized as one of the most enchanting ladies in ancient China, was spoiled by the emperor. He cavorted with the beautiful lady all day and night and neglected state business. He built the luxurious palaces in this area purely for their personal pleasure. Emperor Xuanzong's misbehavior finally resulted in the An Lushan Rebellion, which damaged the stability of his regime and resulted in the destruction of some of the palaces built on the Huaqing site.