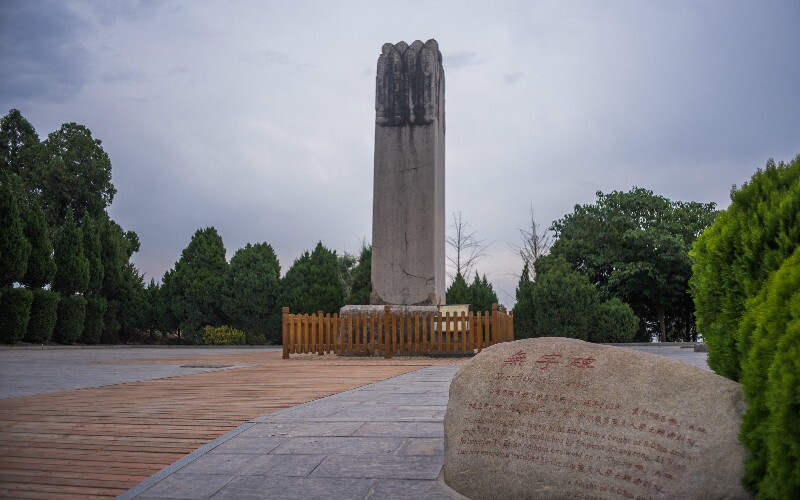 The Tomb of Crown Prince Yide

The Qianling Mausoleum complex has about 18 tombs and mausoleums, but only a few of these have been investigated by archeologists. Three of the major tombs that can be visited by tourists are those of Prince Yi De, Prince Zhanghuai, and Princess Yongtai. During a visit to Qianling Mausoleum and the Qianling Museum, you can visit that of Prince Yi De. Crown Prince Yi De (682-701) had a short and tragic life. It was said that he was talented and cared for his family, but when he was 19, he and his sister were put to death because they talked about their grandmother named Empress Wu. The Tomb of Crown Prince Yi De has murals that are historically important for their detail and historical subjects, and artifacts recovered from the tomb can be seen in the Qianling Museum.

The Qianling Mausoleum is a large burial complex that contains the mausoleum of Li Zhi (李治, 628-683) and Empress Wu who actually started her own dynasty before she died. Li Zhi was the third emperor of the Tang Dynasty (618-907). As one of Li Zhi's clan descendants, Prince Yi De was put in a tomb in the complex. It is interesting that Li Zhi's mausoleum that is the main mausoleum in the complex hasn't yet been excavated by archeologists. It is said that it has never been robbed by grave robbers, so it may hold a lot of treasure and historically important artifacts.

Information about the Tomb of Crown Prince Yi De

Prince Yi De's tomb is southeast of Li Zhi's mausoleum. It is about 250 meters or about 800 feet long and about 214 meters or 700 feet wide. In his mausoleum complex, some metal objects were found, but most of the artifacts were ceramics such as figurines or potteries. Some of this material was put into the Qianling Museum. The most interesting and historically important things to be seen in the tomb besides the tomb's architecture are the painted murals on the walls. There are brightly painted murals on the walls that help historians understand the history of the empire. There is a painting that portrays some of the cityscape, and murals that show processions or officials. There is also a mural of a man hunting with a cheetah on a leash.

Prince Yi De was also named Li Chongrun. He was the only son of Emperor Zhongzong (Li Zhe). His grandfather was Li Zhi (628-683) whose imperial name was Emperor Gaozong (High Religion). Li Zhi became the emperor in 649, and he was an incapable emperor. He became physically weak through health problems, and his wife named Empress Wu became the main ruler in the empire. She established her power by terror and killing rivals, and she appointed capable supporters all over the empire. She also deposed Emperor Zhongzong and ruled in his place. Before she died, she even imposed her own dynasty. So Prince Yi De grew up in a dangerous situation because he was in line to be an emperor himself.

One day, when he was 19 and his grandmother was old, he and his sister who was called the Princess Yongtai talked about the Empress Wu, and she somehow found out about it. She had them both put to death either by forced suicide or torture. She was finally imprisoned in a coup, and Emperor Zhongzong became the emperor again. When Emperor Zhongzong was in power in 705, he had both Prince Yi De and Princess Yongtai put into their own mausoleums near the mausoleum of Li Zhi.

Travel: The Qingling Mausoleum is in Xianyang City that is about 80 kilometers or about 50 miles away from Xi'an. Tourist Bus No. 3 goes there from the Xi'an Train Station. There are other buses that go to Qian County from the Xi'an West Passenger Bus Station. Then transfer to buses that go to the mausoleum area. China Highlights can help you design a tour to visit this sight.