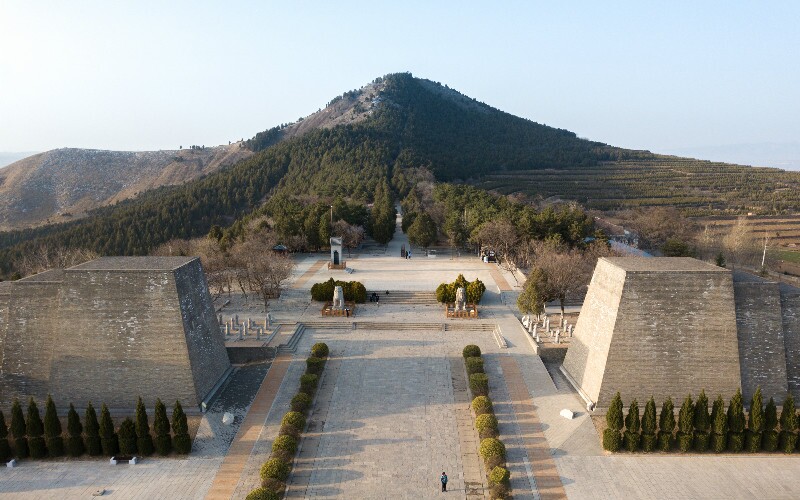 The Tomb of Crown Prince Zhanghuai

The Tomb of Crown Prince Zhanghuai is one of the three major tombs in the Qianling Mausoleum complex that can be visited by tourists. The other two tombs are the Tomb of Crown Prince Yide and the Tomb of Princess Yongtai. Prince Zhanghuai (653–684) was named Li De (李德) and was also named Li Xian. He was the sixth son of Emperor Gaozong who was the third emperor of the Tang Dynasty. Gaozong was a weak emperor who was eventually reduced to be a kind of a figurehead emperor while his wife ruled from behind the throne by terror and by staffing the government with capable supporters. His wife was named Empress Wu, and Prince Zhanghuai lived with the open suspicion that she wasn’t his real mother. Eventually, she killed him as she consolidated power. He was placed in his own mausoleum near his father’s mausoleum. The tomb is decorated with colored murals showing the life of courtiers of the times.

It is said that Li Xian was the second son of Empress Wu, but that people had doubts. He was born in 653. In his big family, there were frequent assassinations. The emperor had sons by other women. Liu Hong who was an older son was killed in 675. Historians suspect that Empress Wu ordered his poisoning, but they are not sure. Li Xian then became Crown Prince Zhanghuai. This meant that when the emperor died, he was in line to be the next emperor. His father gave him a lot of power, but Empress Wu started to try to get him in line. In the year 680, the emperor deposed him on suspicion of treason. It is said that after his father died in 684 and was placed in Qianling Mausoleum, Empress Wu sent someone to assassinate him. Empress Wu later died in 705, and she was buried in the Qianling Mausoleum with the emperor in 706. In 705, Li Xian’s body was placed in his tomb near Empress Wu and his father’s Qianling Mausoleum.

Prince Zhanghuai’s tomb was built about three kilometers or about 1.8 miles from Qianling Mausoleum. The tomb is about 70 meters long, 3.3 meters wide, and 7 meters deep or 230 feet by 10 feet by 23 feet. On the walls of the tomb are colored murals. One depicts three Tang officials with some foreigners. One looks like a Westerner. Another mural depicts people playing polo. There are other murals also that help people see something about the life of the times.

China Highlights can help you customize a tour to visit this tomb and other historical sites in Xian, or just see our Xian Tours.