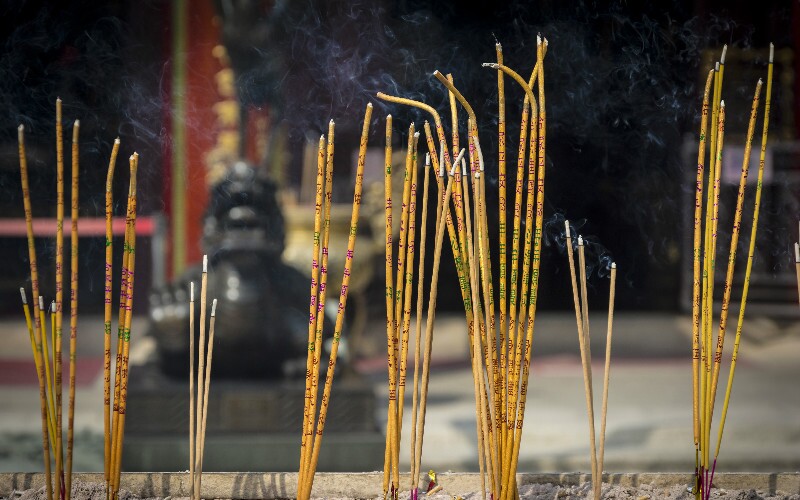 The Xingjiao Temple (兴教寺) was built in the year 669 by a Tang Dynasty ruler named Emperor Gaozong (Li Zhi, 628-683) in honor of a monk named Xuanzang (602-664) who had traveled to India and brought back a lot of Buddhist literature that he then translated. “Xingjiao” means flourishing teaching, and another Tang Emperor put these words on a post long afterwards. A temple that stood there before was destroyed during the Qing Dynasty (1644-1912) era. The main things to see at the temple site now are a brick Tang-era pagoda that houses ashes of Xuanzang, two other smaller dagobas, and a temple that was built in the 20th century.

A five-storey pagoda was built in the Tang Dynasty era to house the ashes of Xuanzang. The pagoda is grey, and is the most notable ancient architecture at the site. There are also two three-story dagobas for two other monks with it in a courtyard. There is also later construction.

There are statues from the Ming Dynasty era in the temple, where there is also a bell tower, a drum tower, a library, a Great Hall of the Buddha, and a building for teaching, and all of these buildings were built in the 20th century.

Xuanzang was born in 602 and witnessed the fall of the Sui Empire and the rise of the Tang Empire (618-907). He was remarkably intelligent and religious. He traveled widely in China. He wanted to better understand the original Buddhist teachings and thought that the translations of Buddhist scriptures that he found in China were poor and inaccurate. So he wanted to travel to India.

At that time, the Tang Empire had a war with a country in Central Asia. In 629, he convinced some border guards to let him pass westwards and traveled along the Silk Road. First he went to Turpan in the area of modern Xinjiang where he met a Buddhist king who assisted him and gave him funds for his journey. Then, he kept traveling west. He met Mahayana Buddhism monks and non-Mahayana Buddhism monks. He went all the way to what is now Afghanistan that he said had the westernmost Buddhist monastery in the world. He then went to a country called Gandhara where much of China’s Mahayana Buddhism originated. He then went to India and traveled around, and then he went to what is now Bangladesh.

During all these travels, he encountered groups of monks and monasteries of monks. He learned from them and also acquired scriptures from them. He also learned from some of the leading monks. They appreciated that he would have a lot of influence in the Tang Empire if he went back, and they supported him.

He returned to the Tang Empire via the high Khyber Pass and passed through Kashgar in Xinjiang. When he returned to the Tang capital of Changan in 645, the Emperor Taizong and the whole city honored him. Emperor Taizong wanted to appoint him to important posts, but he refused these appointments and settled in a monastery where he devoted himself to translating about 600 texts that he brought back with him and teaching students to translate the books.

In 646, he finished writing his memoirs of his journey in a book called Great Tang Records of the Western Regions. This book has proved accurate and is valuable for historians and archeologists who study South Asia and Central Asia. For the 14 or so years after his return to Changan, with Emperor Taizong’s support, he set up a large translation office. Many people came from around China to learn from him and help with translation. Monks from Korea and Japan also came.

It is said that the ancient novel Journey to the West was inspired by his journey. It is said that parts of his body are in different places in the world. Japanese troops took some of his remains from Nanjing during WWII, and they are in Japan. It is also said that some remains were taken to India in the 1950s. Some ashes of his body are said to be in the pagoda at Xingjiao Temple.

Travel: The Xingjiao Temple is in the Weiqu District of Xian that is about 16 kilometers south of the Xian Train Station in the center of Xian. To get there by bus, you can take Bus No. 215 or 229. Get off at the Weiqu Bei station or the Weiqu Nan station, and take Bus No. 917 to the temple.

Fee: 10 RMB or about 1.50 USD. China Highlights can help you design a trip to this and other places.