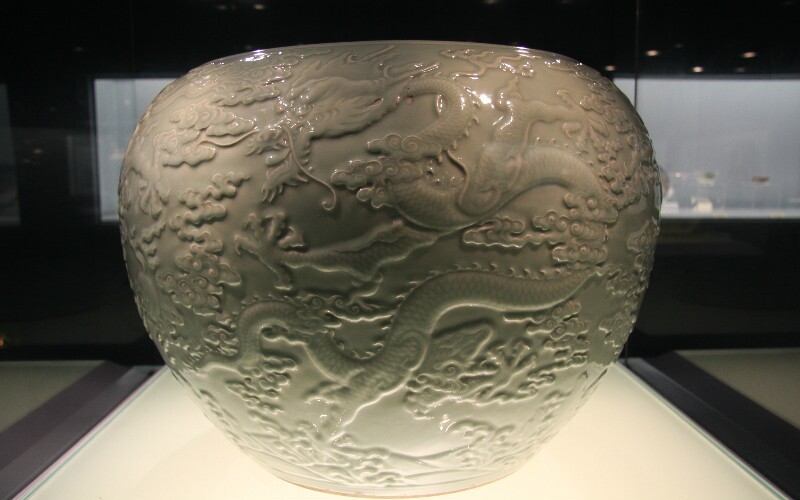 Chinese ceramics were renowned around the world during this time and were exported to other countries. It is kind of amazing to see the intricate artwork in the porcelain vessels during the various eras, and while in the museum, you can study how designs and ceramic production techniques changed. Some items were handcrafted works of art, and other items were clearly mass produced vessels for common use.

Like silks, ceramics was an industry in which ancient Chinese craftspeople excelled. The Yaozhou Ceramics Kiln Museum preserves ancient kilns that are opened for view, and it is one of the biggest Chinese pottery museums in China.

At the Yaozhou Ceramics Kiln site, you can tour ancient kilns. Archeologists think that the kiln field was once quite big with big kilns that produced large quantities of ceramics. The kiln site extends about five kilometers. According to archaeologists' measurements, the kiln furnaces were generally about 3 to 4 meters high and 2 meters long and 3 meters wide.

Even though some of the products are quite simple, they are still beautiful. For example, a simple small bowl with a lid that was produced during the Northern Song Dynasty era in the 11th or 12th century has a pleasant subdued grey-green color. At that time, the green Yaozhou glaze was meant to pool around the carved designs, and in the particular bowl with a lid, the pooled darker green color offsets the leaf design highlight.

Archeologists and other people have found millions of pieces of artifacts in the kiln area. Only some of all these artifacts are displayed in the museum. The museum covers about 60,000 square meters, and there is an exhibition area of 9,000 square meters or 10,500 square yards. People can go out to see uncovered old kilns and see the displays of ancient artwork and ceramics pieces inside. Hopefully, people with appreciate and be enriched by the ancient artisans’ aesthetic.

There are also three special sections of interest. In the Exhibition of the History of the Yaozhou Kiln section, people are instructed on the history of the development of ceramic technology and art in the various dynastic eras. Visitors can see examples of each major era’s ceramic output and learn how the technology progressed over time.

In the Demonstration and Participation section, talented artisans and museum staff help people to make some their own ceramic artworks. In the Reference and Research section, people can learn about how technicians and craftsmen are investigating new methods of ceramics production for industrial applications such as insulators or other products.