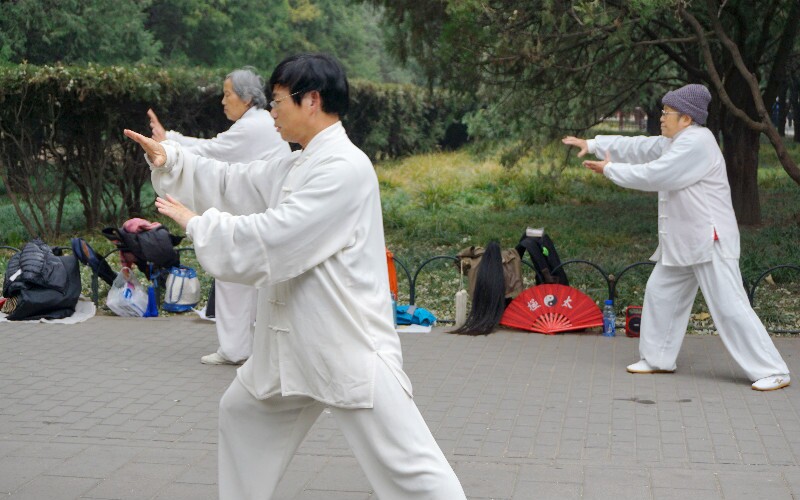 Tai chi chuan (taijiquan) is an ancient Chinese "internal" or "soft" martial art often practiced for its health-giving and spiritual benefits; it is non-competitive, gentle, and generally slow-paced. By increasing strength, flexibility, body awareness and mental concentration, tai chi can improve one's health in a subtle way. Contrary to the Western concept of "no pain, no gain", one hour of tai chi practice actually burns more calories than surfing and nearly as many as downhill skiing,so it's a veritable workout.For Western tourists who are interested intaichi exercise in China and may wonder if they could have a try on their own,then a Yangshuo taichi class provides them with a wonderful opportunity to experience authentic Chinese taichi.

Taichi is a martial art which emphasizes technique over strength. This workout is low-impactand soft.Therefore it is suitable for most people and it gives the learners a chance to master this martial art regardless of strength or age.However, for those who have joint pains, spine injuries, fractures, heart problems, or who are pregnant, it's better to discuss taking up tai chi with their medical practitioner first.

China Highlights is committedto selecting better suppliers for our customers. Located at New West Street in Yangshuo,Mudanxuan is a traditional Chinese culture exchanging center which offers calligraphy, painting and taichi classes in English. It is well known for its traditional Yangstyle taichi. Mr Yang, the master in the Mudanxuan taichi class, has practiced taichi for over 30years and has great experience in teachingtaichi lessons.When taking part in the class, it covers not only how to practice taichi,but also the culture and essence of taichi philosophy. Book with China Highlightsand we can make an appointment with Mr Yang to suityour requirements.

Details of the TaiChi Class

First, you will warm up your body and learn how to keep distractions out of your practice zone. During the tai chi session, you are expected to put aside distractions and focus on your body's energy. The deep breathing aspect will help you to concentrate. Part of the secret of tai chi's health benefits comes from deep, abdominal breathing. Most of the Chinese martial arts need "abdominal breathing", in which one breathes in, expands the abdominal area (not the chest) and exhales by contracting the abs. All inhalation is through the nose, exhalation through the mouth and the tongue should touch the roof of the mouthfor stimulating salivary function.

Then you will learn how to retain the correct posture without excess tension. Classic tai chi literature often describes this as standing "as if one were suspended froma string on the top of the head".

When practicingtaichi, think of moving your body as one unit, rather than in sections. To make your arms push forward, push from your legs and shift your entire torso forward, rather than moving the arms alone. Traditionally this is considered as moving from your "dan tien", the center of the body located just below your navel. Moving the entire body in an integrated way is the essence of the "internal power" (nei jin) of tai chi's self-defense application.

Time: There is no certain time for a taichi class. So it is very flexible and you just need to ask your tour guide to help you make an arrangement.