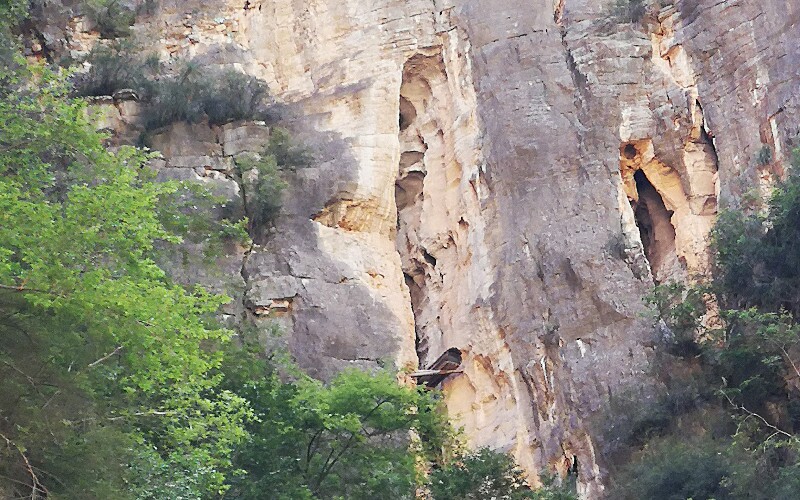 The Three Gorges on the Yangtze River, which is 193 kilometers long, is a world-renowned destination. The scenery there is spectacular and wonderful because of the innumerable sharp and strange cliffs and rocks, rushing water and many scenic spots and historical sites. However, with the construction of the Three Gorges Dam, those scenic spots and historical sites that we thought would be permanent are now vanishing, and some have even vanished.

Among the Three Gorges, Qutang is the shortest, the narrowest and the most dangerous gorge with the most majestic and magnificent scenery, such as steep and lofty cliffs and precipices on both banks of the rapidly flowing river. The height of the main peak reaches 1,500 meters, and the narrowest width of the river may only be a dozen meters, which shocks tourists the most. 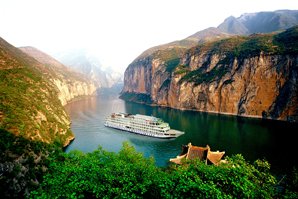 Besides, there are some other scenic spots, such as the ancient plank roads, Fengxiang Gorge (the Bellows Gorge/风箱峡), the ancient hanging coffins, the Fenbi Wall (粉壁墙), the Fenghuang Yinquan (Phoenix Drinking Spring/凤凰饮泉), and the Daodiao Heshang (Upside Down Hanging Monk/倒吊和尚). It is worthwhile to note the Fenbi Wall because of the characters carved into it through the centuries.

Actually, the Fengxiang Gorge is a steep and dangerous cliff with no plants, on which some gaps are found. In one of the bigger gaps, there is a pile of wooden boxes which look like bellows, which is how it got its name.

The name of the hanging coffin varies from place to place in the Three Gorges area. It is also called Chuanguan (Ship Coffin/船棺) or Yanguan (Rock Coffin) in some places. In ancient times, in order to create a heaven for the ancestors to rest, people buried their bodies in coffins hanging on the cliffs so as to keep the body from the wind and rain, and to prevent erosion from being underwater. Some hanging coffins were put at a height of more than 500 meters.

Fenbi Wall is a thousand-meter white tumbled wall into which numerous characters were carved, standing on the southern bank of the Yangtze River at the entrance to the Kuimen Gate (夔门), under the Baiyan Mountain (White Salt Mountain/白盐山). Fenbi Wall got its name for its slight white color and the characters carved in the Song Dynasty.

On the bank of Qutang Gorge stands a phoenix-shaped stalactite. Seen from a distance, the stalactite, together with the rose vines twining around it, comprises the vivid picture of a phoenix, hauling her long tail and stretching her neck to drink from the spring.

There is a strange stone standing out from the others on a steep cliff on the southern bank, which looks like a bald, barefoot monk hanging upside down. Therefore, people call it 'Daodiao Heshang'.

After reserving the water, the scenic spots in the Three Gorges area have changed: the ancient pathway on the northern bank is largely immersed underwater, and some of them are actually underwater, such as Fenghuang Yinquan, Fenbi Wall and Daodiao Heshang.

Zigui, once the hometown of Qu Yuan (a great poet in ancient times), is located at the foot of Niushan Mountain in the broad valley of Xiangxi (香溪) on the northern bank of Yangtze River. The ancient city is surrounded by stone walls and is therefore also called Stone City (石头城). The walls and the classical buildings in it make the ancient city look like a tilted gourd; therefore, it has another name of 'Gourd City'.

When it's time for the Dragon Boat Festival, the local people hold the dragon boat races on the Quyuantuo River (屈原沱) which is about one kilometer away from Zigui. Now, the main extant scenic spots in Zigui are the Qu Yuan Temple (屈原祠) and the Quyuan's Former Residence (屈原宅).

The original Qu Yuan Temple has been rebuilt as a replica on the Phoenix Mountain, opposite the Three Gorges Dam, because the original site ended up being underwater.

Baidicheng is on the northern bank of Yangtze River, eight kilometers east of Fengjie. Surrounded by water on three sides, lying at the foot of High Gorge (高峡) and set in front of Yangtze River, Baidicheng is a popular scenic spot with a long standing reputation for its unique location and magnificent scenery.

There have been many works in prose and verse, antiques and steles through the ages. Among these, the Bashu Bronze Sword (巴蜀铜剑) was produced in the Spring and Autumn and Warring States periods, and some steles were created in the Sui Dynasty, with a history of more than 1,300 years.

Baidicheng entered tough times in 2000 when the second phase of reserving water in the Three Gorges Reservoir Area began. Some parts of it would be flooded. Therefore, some famous scenic spots should have been moved before the reserving project, such as West Pavilion (西阁 built for commemorating Du Fu, a famous poet in China) and the statue of Du Fu. Also, the eight-sided fortress would be submerged in the water forever. 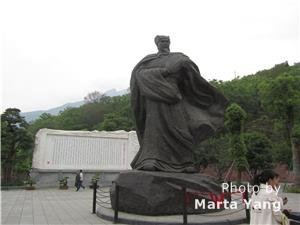 For Baidicheng, the greatest loss lies in those vanishing sights. The babbling river has changed into a silent one, and tourists will never enjoy those beautiful views in poetic quality.

Shibaozhai is regarded as one of the eight architectural miracles in the world. It lies on the northern bank of Yangtze River, 45 kilometers away from Zhong County in Chongqing where there is a huge isolated stone with a height of more than 40 meters called "Shibao" (Precious Stone). The stone looks like a jade signet, therefore, it is also called Yuyin Mountain (Jade Signet Mountain/玉印山).

Shibaozhai is a red wooden tower with 12 floors, and it is 60 meters high. Tourists can reach the top by climbing the winding stairs in the tower. There are a lot of ancient portraits and stone inscriptions on each floor.

Spiraling up the tower, people will reach an ancient temple called "Ganyu Temple" (绀雨宫) in which there is a statue of Manzi, a general from ancient Sichuan. In the wing-room, there are some calligraphies and stone inscriptions by celebrities in Zhong County.

Shibaozhai is the only wooden building in a column and tie construction in China. It is the irreplaceable landmark building for the folk architectural skill in southern China. 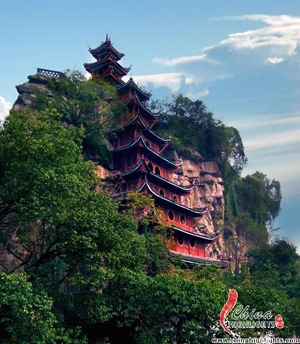 Yuyin Mountain and Shibaozhai are surrounded by water now. Although measures have been taken to protect them, the original landscapes don't exist anymore because of the project.

There was a saying in ancient China: it was easier to climb to heaven than take the Sichuan Road. Therefore, the transportation in the Three Gorges Area depended on water only. When the flood season came, navigation was not available and the trips would stop. In order to improve the transportation situation, people built a pathway on the walls of cliffs by hammering and chiseling, from the Tiezhuxi River (铁柱溪) in Fengjie to the Qinglianxi River in Wushan (巫山青莲溪), totaling 65 kilometers.

The best section of pathway was built in Qutangxia in 1888, during the reigning period of Emperor Guangxu of Qing, and was completed in three years with many difficulties. The ancient pathway, more than ten meters above the river, contained paths, stone bridges, shackles and stone fences. Unfortunately, after reserving water, the pathway was submerged.