How to Tour the Yangtze River The Three Gorges area in the middle reaches is where to truly tour the Yangtze... by cruise ship. The other best places to go touring along the river are clustered around Lijiang in the upper reaches and the Yangtze Delta.

Find out how to best discover the Yangtze below.

The Top Attractions on the Yangtze between Chongqing and Shanghai

The Yangtze's middle reaches are broad and placid between Chongqing and Yichang, and it is the most popular area for cruise ship touring and for sightseeing boats that take people up the Three Gorges. This 160-km (100-mile) section between Yichang and Chongqing is where most of the 200 or so tourist cruise ships ply.

What You Should Know about Cruising the Yangtze Enjoy the tranquil Yangtze aboard a classy cruise ship.

If you have never cruised before, this journey’s ideal for you. Rivers are calmer than sea voyages, and if you are not sure what to do, there are many opportunities for entertainment onboard, much interesting scenery, and opportunities for excursions daily. The best thing is seeing all its scenic spots without having to pack and unpack every day. Dress code on board is casual.

2. The Best Seasons for a Yangtze Cruise

The middle seasons, spring and fall, offer the best weather conditions. April/May and September/October are the most expensive times to cruise.

Go 5-stars if possible: The best thing to do for a good cruise is to go on a luxury cruise, because Chinese middle-budget cruises don't meet the international standard. Chinese might accept the accommodations and food, but you may well be disappointed.

Bait and switch: There are complaints about ships giving below-par rooms onboard and then offering to allow people to move to better rooms for a price. To avoid scams, we suggest go with a reputable tour company handling the bookings and accommodations and also checking cruise ship reviews.

4. Go to the places you want to an a cruise.

Every cruise ship has a different itinerary. See our list of Yangtze River Shore Excursions, decide which you'd like to go to, and then check the cruise itineraries to see which ship stops for excursions at the places that interest you.

See our Yangtze River Cruise Ships Comparison or contact us for free advice or information about the cruises. Cultural relics along the Yangtze River include the unique Shibaozhai, 'Stone Treasure VIllage'.

Beginning (or ending, depending if you’re sailing downstream or up) at Chongqing, after testing it’s famous hotpot, maybe a cable car trip over the Yangtze, or time watching peanut brittle made by men physically beating it with mallets, you are now ready to board.

Bangbang men will run your bags to your ship, threading the handles through a thick bamboo pole and balancing it across their shoulders.

At Chaotianmen Dock, where you board, you can see a distinct meeting of two rivers as this is where the clean water of Jialing River meets the brownish yellow of the Yangtze that has picked up silt and sand from the bottom.

Aboard the Cruise Ship The deck of a Yangtze cruise ship

Cruise liners are guided by computers and sonar, but also the naked eye of a ship’s crew as you sail equidistant from the two sets of markers on the river sides.

"I was invited to view the bridge of the Victoria Lianna on my 50th birthday."

writes Lynne Buddin, a China Highlights customer, who has cruised the Yangtze and has authored this A Typical Yangtze Cruise section from first-hand experience.

Beautiful and dangerous river cliffs: Locals name all the beautifully shaped, hard granite mountains — like The Frog, or the Three Ladies, but maybe it’s only possible to see them after drinking their strong rice wine! Some rock is a much softer limestone. The Government had to abandon a much-wanted road being built between villages after six men died building just 2 miles of it 100 feet up. It remains incomplete. Fengdu, Shibaozhai and Qu Yuan Temple: These 3 stops along the Yangtze show travellers the history, architecture, art and culture of the people living here. You can’t help but be impressed by the buildings and the tour guides do a great job in conveying the way of life of the ancient people.

Don’t be put off by Fengdu’s name, “Ghost City”. Statues and figurines everywhere represent the spirit world. We chose between health or wealth routes to allow us passed armed men in national costumes into eternal life. We run up 33 steps in one breath and balanced on one leg stood for a minute on a stone inside a box, each a test to prove our worth for the after life.

Shibaozhai ('Stone Treasure Village') is a trip over quite a wobbly wooden bridge and up long flights of steps to a giant red pagoda that looks like its been pushed into the mountain by a giant hand. It is bui

lt without a single nail. Qu Yuan Temple is a group of buildings built to honour an ancient poet, houses his tomb and is only 600 metres from the Dam. On the face of it maybe a visit to the biggest hydroelectric power station in the world may seem dull, unless you like engineering. But believe me — it’s far from dull! Impressive isn’t a big enough word for the Three Gorges Dam — it’s breathtakingly massive.

More seriously though it’s stopped the flooding which caused so many deaths and allows China to harness the power of the mighty Yangtze.

How to Avoid Crowds and Enjoy a Cruise the Most On the Lesser Three Gorges cruise excursions, the small boats allow you to get away from the crowds.

To avoid crowds, we suggest that you:

How to Get Your Yangtze Cruise Tickets

Explore the Yangtze with Us Explore beautiful tributaries of the Yangtze like Shennong Stream, a narrow gorge in the middle reaches, during an excursion there.

A private, tailor-made China tour means that you will be well taken care of by your own guide and driver, and enjoy a lot of flexibility in what you choose to do.

Just fill in a 4-minute Create-My-Trip form with your interests and requirements, and we will send you a quote and proposed itinerary within 24 hours.

Here are some customizable itineraries for your inspiration:

Other Yangtze Touring Areas — in the Upper and Lower Reaches Once a cluster of trade towns on the Tea Horse Road trade route, the Lijiang area abounds with ethnic Naxi, historical, and natural attractions.

Lijiang has its own airport, and buses go fairly quickly and frequently to/from Dali and Kunming. There is at yet no bullet trains to Lijiang, but trains with beds and bed buses are options. 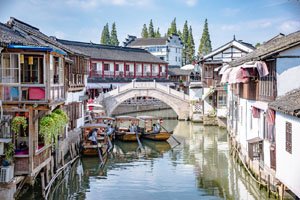 Zhujiajiao Water Town has quaint scenery and is one of the most popular water towns.

The Yangtze's lower reaches include, the historic and huge cities of Wuhan, Nanjing, and Shanghai, and the picturesque water towns.

Victoria Cruises, the only American Yangtze cruise company, are the also the only company whose ships travel the whole distance from Shanghai to Chongqing. Cruise from Chongqing to Wuhan/Shanghai (about 7/10 days), upstream or downstream.

The scenic water towns near Shanghai have become very popular for tourism. Most can be reached within two hours by private vehicle or direct bus.

Shanghai, the biggest city in the world has thousands of attractions, but the downtown Bund area is the most visited by tourists. Shanghai has a huge international airport, so it is a great place to start a China tour. The Top 10 Attractions Along the Yangtze River