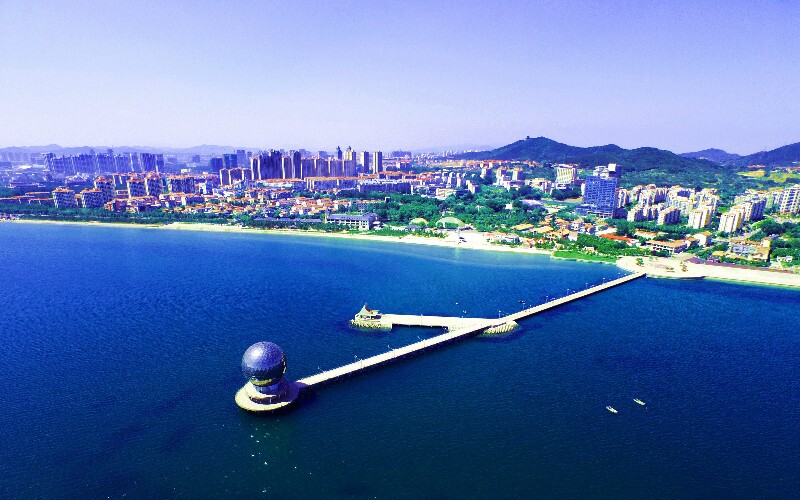 Yantai Travel Guide - How to Plan a Trip to Yantai

Yantai, in the middle of Shandong Peninsular, around 200 kilometers away from Qingdao, is one of the most beautiful coastal cities in China (see Yantai Map).

Although Yantai cannot be compared with Qingdao in terms of general popularity among foreign tourists, Yantai nonetheless offers a picturesque, even romantic (especially at night) seascape whose beauty is epitomized in the stretch along the Binhai Road. Moreover, Yantai's bathing beaches are more relaxed and less crowded than those of Qingdao.

Yantai first caught the attention of tourists due to the Penglai Pavilion in the city of Penglai, some 65 kilometers farther west along the coast from Yantai. Penglai has a reputation as a fairyland on earth, thanks to its majestic scenery, and is associated with a number of Chinese legends. But the city of Yantai, with its charming seascape, its world-famous-in-China wine culture and its colonial-era western architecture, is quickly developing a reputation as an attractive tourist destination in its own right, as witnessed by the increasing numbers of tourists who choose to visit Yantai each year. Although there are currently no tours to Yantai on our site, our travel advisors are glad to help you design your own tour. Click the following link to design a trip to Yantai: https://www.chinahighlights.com/forms/tailormadetours.htm

Yantai people are proud of their seafood praparation. And rightly so, Yantai's seafood is famous throughout the country. Read more on Yantai's food and restaurants

Yantai belongs to the typical maritime climate with long and cool summer. The average temperature of the hottest month is around 25C (77F), which makes it a nice summer retreat. Read more information on Yantai's Weather.

Yantai, which means Smoke Terrace, was a small fishing village during the Ming Dynasty. Wolf-dung fires were lit on today's Yantai Hill to warn the fishing fleets of approaching pirates during the Ming Dynasty. However, the arrival of the British and many other western nations in the late 19th century, turned what was once a backwater into a busy trade port. In late 19th century, Yantai was handed over to the British by the decaying Qing government, following the defeat of the Second Opium War. The well-preserved western architecture in Yantai Hill bore witness to Yantai's humiliatingl past.

Taking advantage of its geographical location on China's coast, near the entrance to the Bay of Bohai, Yantai has developed into a very important harbor in China, and one of the three most prosperous and fast-developing cities in Shandong Province (with the other two being Qingdao and Weihai, both of which are coastal cities).