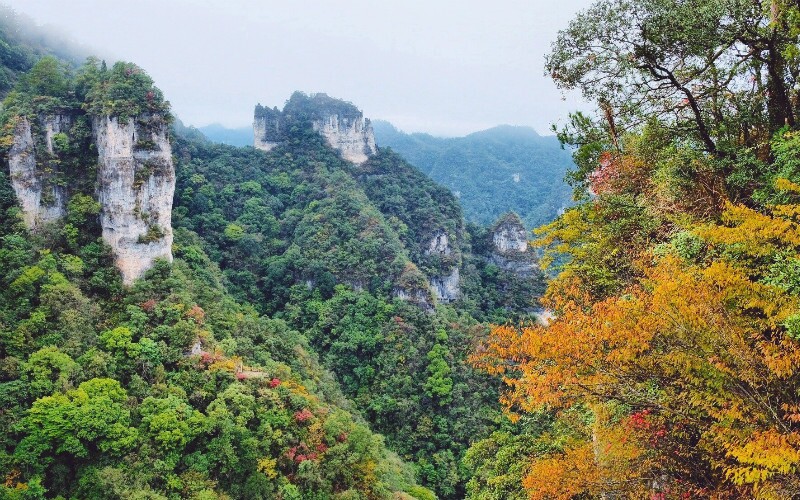 Kunyu Mountain is a high and vast mountain towering over areas of Yantai and neighboring Weihai. It is the highest mountain in the east of the Shandong Peninsula, with the highest peak over 900 meters above sea level.

Kunyu Mountain offers pristinely beautiful natural scenery. The mountain is covered by lush ancient trees, among which flow numerous clear streams. Countless mysterious and deep gorges largely remain untouched by human beings. The sound of waterfalls and the chirping of birds blend harmoniously with the quietness of the mountain. The mist-shrouded peaks add a mysterious touch. The original ecosystem is well-preserved, making the charming and inviting natural beauty worthy of added appreciation. The mountain lays claim to over 1000 species of plants and animals.

Mount Kunyu is also famous for its religious and cultural heritage, since it was revered by both Taoist monks and Chinese emperors, the latter often arriving to Mount Kunyu in search of the elixir of life, the belief in the existence of which was widespread at the time. For example, Emperor Wu Di of the Western Han (BC 206 - AD 009) Dynasty, who ruled from BC 140-87, came to Mount Kunyu in search of the elusive elixir that Taoist monks believed to exist and which it was believed could confer immortality (a later, Ming (BC 1368-1644) Dynasty emperor, Emperor Jiajing, would in fact die as the result of drinking mercury in the belief that the substance would confer eternal life. In general, it was believed that long-lasting substances such as jade and cinnabar, as well as precious metals like gold, possessed elixir-of-life properties. It is not surprising that Daoist temples, monasteries, pavilions are scattered here and there all over the mountain. Some of the temples are still in active use and keep attracting pilgrims.

Kunyu Mountain makes up a nice tourist destination all year round. In spring, the sight of greenery dotted with wild flowers makes a feast for your eyes. In summer, it is cool with plentiful shade, and is thus a good place to avoid the summer heat.  In autumn, flaming colors of maple trees and dark green pine needles mingle over the mountain, with nature making such a colorful carpet to walk through. In winter, it takes another appearance. The ground is a blanket of white with a capping of snow-laden trees.