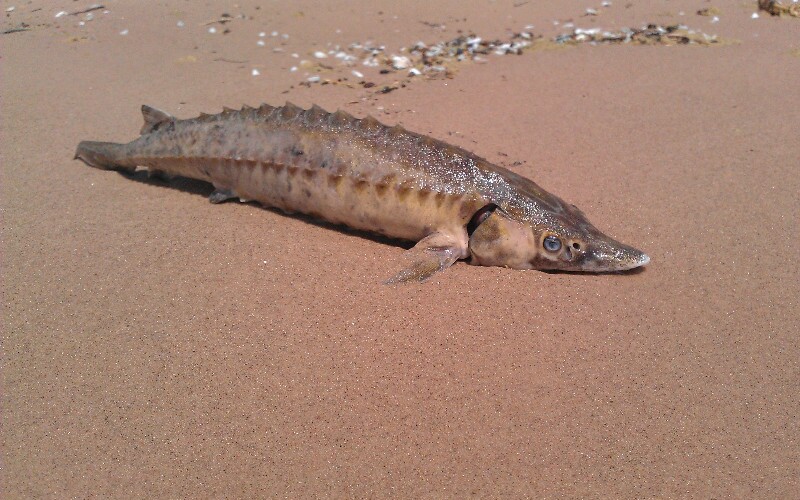 The Chinese Sturgeon Museum, located on an islet in the Huangbo River in the Yiling District of the city of Yichang, is part of the Chinese Sturgeon Research Center, an institution that is dedicated to the preservation of rare fishes living in the Yangtze River. The museum displays all the life-cycle stages of the Chinese sturgeon, as well as 10 different species of sturgeon from around the world.

The Chinese sturgeon has been dubbed "The King of Fishes" in the Yangtze River because of its size. An adult sturgeon can reach more than 5 meters in length and weigh over 500 kilograms. The female Chinese sturgeon first becomes sexually mature at the age of 14, which itself poses a threat to the survival of the species. A female Chinese sturgeon lays about a million eggs at one time, although only roughly 10% will survive (the overabundance of eggs provides sustenance to a number of other creatures in the river, of course). Unfortunately, of the one hundred thousand eggs that do survive, only a handful of the hatched surgeon fingerlings will survive the crucial first stages. When one adds these odds to the fact that a female surgeon first becomes sexually mature at the age of 14, provided that she survives that long, one can appreciate the vulnerability of this rare species.

Although the Chinese sturgeon lives mainly in the shallow sea along China's southeastern coastline, it spawns in the Yangtze River. Each year from summer to autumn, schools of Chinese sturgeon migrate from the shallow coastal sea areas to the upper reach of Yangtze, where they match in the river and spawn. Amazingly, they remain with their offspring until the latter have grown to about 15 centimeters, then mother fish and fingerlings swim back to the sea together , which contrasts with most known fish species which lay their eggs and depart immediately. However, the construction of Gezhou Dam on the Yangtze has blocked the sturgeon's migration route.

To minimize the potentially devastating effect of the dam on the fish population, the Chinese government ordered the establishment of a research center in 1982 whose primary focus would be the preservation of the Chinese Sturgeon. Much work has since been done by the Chinese Sturgeon Research Center to compensate for the negative effect of Gezhou Dam on the sturgeon's spawning habits. Over 40 thousand juvenile fish (15 centimeters or longer) have been released at the mouth of the Yangtze River since 1984. These juvenile fish migrate first to the aforementioned shallow coastal areas, then return when sexually mature in order to spawn. They are then captured, the females "milked" of their eggs and the males of their sperm, then the eggs are hatched at the research center's hatchery, to be released at the mouth of the Yangtze when the fingerlings have reached the required length of 15 centimeters.