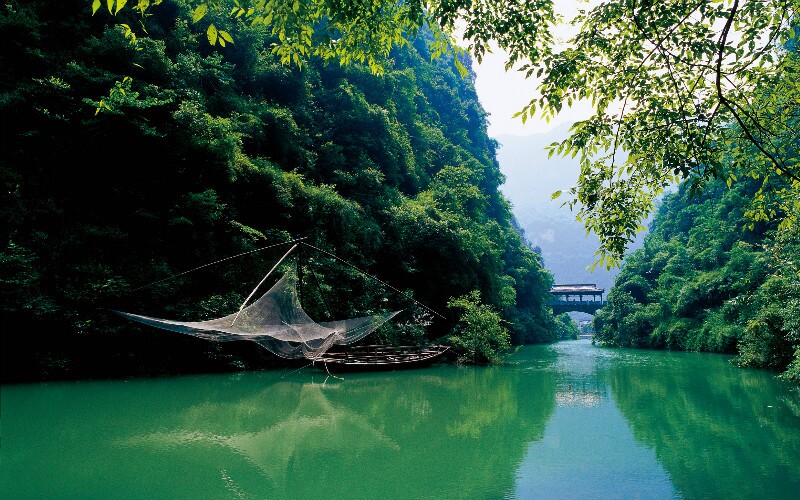 Shennong Stream, also called Yandu River, is the first tributary that feeds the Yangtze River after it comes out of the Wu Gorge and flows into Xiang Stream (Wang Zhaojun's birthplace - Zigui County) Broad Valley. It is known as the "Jade Waterway" of the Three Gorges.

It originates in the vast green mountains of Shennongjia, and has a total length of 60 kilometers, with a rafting section of 20 kilometers. Its water is clear and clean. The peaks on its banks are exotic and lofty.

It flows among the high mountains and lofty hills in the territory of Badong County in Hubei Province in a vein-like manner from north to south, and enters the Yangtze River at Xixiangkou, 2,000 meters east of the outlet of Wu Gorge.

Mianzhu Gorge boasts differently-shaped stalactites and the sight known as 'A Thread of Sky' that is precipitous and narrow, with strange and special peaks and rocks that is like "a python is coming out mountain", "a wild man stretching out his palm", and so on.

In the Minzhu Gorge, which is known for its precipitousness, there are karst caves everywhere on the precipices which are difficult to climb up. Huge stalactites are hung in the air upside down. The stream bed is narrow, and its river drop is large.

There are more than 30 sections of rapids in the 4 kilometers long waterway. Rafting in the stream makes tourists' hearts beat faster, but they will be more scared than hurt due to the boatmen's superior skills.

On the stream banks, there are more than 60 karst caves. In the stream, there are over 60 sections of rapids, long shallows, riffles at the coves, and shoals. The water there is crystal clear. Deeps pools look dark green, and fish are faintly visible at the shallow bottom.

In addition, there are waterfalls, suspended coffins, plank roads alongside the cliffs, primitive boats, and profound ethnic village customs. All of these compose the unique landscape of Shennong Stream.

Shennong Stream can be regarded as a pollution-free natural stream that has limpid water, without much muddy water except for the "Three-Color Spring". Five-color stones are everywhere at the bottom of the stream.

At the sections of rapids, boats will travel rapidly, like they are flying; at the places where the water flows slowly, quiet lakes are formed; while encountering riffles where the water is not up to the knees and the pebbles rub against the creaking boat bottoms, the boats must be pulled by the boat trackers.

Parrot Gorge is the most scenic one among the three gorges. On its sides, there are evergreen plants, waterfalls, estavels, and other spectacles.

At one section of this gorge, blooming flowers can be seen all the year round, so it is called the "Cove with Year-Round Blooming Flowers".

At another place known as the "Nine Springs", nine springs flow out of piles of cluttered stones and become distinctly clear, muddy and turbid when they fall into the stream.

As a result, a 100-meter long colored spring is formed, and is called the "Three-Color Spring". It can be said to be a unique spring in the Parrot Gorge.

Longchangdong Gorge: boats can go in and out of the 10 kilometers long cave

The last gorge that Shennong Stream runs through is the Longchangdong Gorge. Its average width is less than 20 meters. Its precipices stand in the water and extend for over 5,000 meters, showing the same majesty of the Qutang Gorge; it is also called Kuimen.

Cultural landscapes along this gorge include a group of coffins placed in the rocks and ancient plank roads.

On the cliff of Shennong Stream, suspended coffins left by the ancient Ba people (the Ba people refers to a nation that lived in the south-east of Shanxi, the west of Hubei, and the east of Sichuan in the pre-Qin period of ancient China) of the Warring States Period.

On the cliff, which is 150 meters above the water surface at the east bank of Longchangdong Gorge, there are many small caves. Coffins were placed in these caves at different depths, which are clearly visible to the naked eyes.

It is still a mystery today how these coffins were placed there.

The entrance of the "Yanziqian Karst Cave" is 80 meters high and about 30 meters wide. It got its name because thousands of Himalayan swiftlets fly in the cave.

At a depth of 50 meters inside the cave is a place called the "Thousand Qu of Terraces", because there are layers of "terraces" formed by karst accumulation，which are shaped like the Chinese character "Pin" (品) from top to bottom.

Shennong Stream is a typical canyon stream, which has clear and sweet water, lofty peaks and steep cliffs on its sides, and a winding waterway. In the stream, there are more than 60 sections of rapids, long shallows, riffles at the coves, and shoals.

Although the waterway is narrow and torrential, it is also clear and shallow. Therefore, rafting there can be both very exciting and safe.

Rafting Is Possible in All Four Seasons

The reason why rafting is possible in Shennong Stream in all four seasons is that "Shennong Spring" supplies a sufficient amount of water.

"Shennong Spring" originates from the Jigong Mountain which lies to the west of the main peak of Shennongjia.

Due to the "lung lobe function" of the virgin forests (the virgin forests are regarded as the lung lobes of the earth), "Shennong Spring" is not affected by drought on rainless days. It has an endless supply of water.

The steep cliffs on the two banks of the stream are facing each other, forming a narrow place of less than 7 meters between them. These cliffs are composed of rocks and are at 80-90 degree angles to the stream. Their relative height differences are between 300 and 800 meters.

The average daily water flow of the stream is 20 cubic meters per second, the steepest drop of which is up to 3 meters. All of these can make you enjoy the experience of extreme sports.

A "flat bean" small boat that has a carrying capacity of 2.5 tons can sail at the section which is 20 kilometers upstream from the stream mouth throughout the year. Sailing through the gorges is just like passing through quiet alleys and heavy doors.

The oncoming mountains that have heights of hundreds of meters mean that you can hardly see the waterway ahead of you. Upstream of the Shennong Stream is the mysterious Small Shennongjia Nature Reserve.