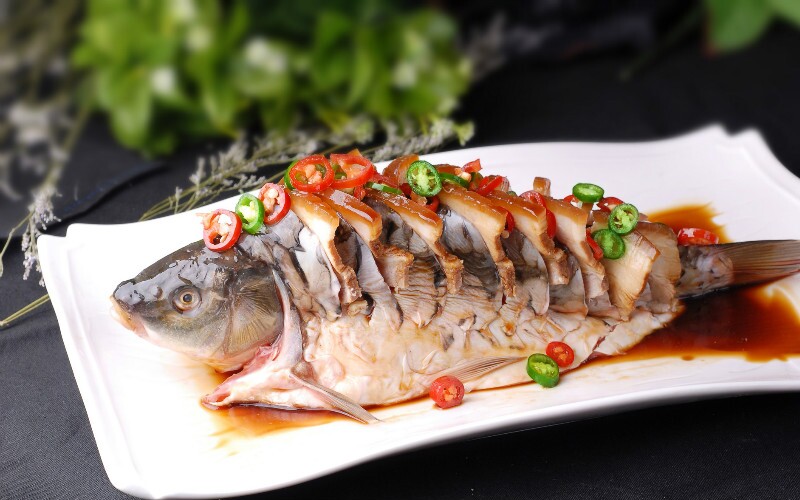 Yichang cuisine is quite similar to that of Sichuan and Chongqing, and is characterized by hot and pungent flavoring. Because Yichang is located on the banks of the Yangtze River, fish dishes are abundant here. Except for the local specialties, food from other parts of the country is widely available. The reprehensive dishes of Yichang are the Old Nine Bowls, Three Gorges Pearl Soup, Sanyou Chicken, Basha Fat Fish.

This dish consists of nine courses and is an inseparable part of a banquet.

The dish was inspired by the beautiful scenery of the Xiling Gorge which makes up of high mountains and deep gorges, and was prepared to looks like the landscapes in appearance. The dish is made with chicken, egg white and fish balls. The egg white is made resembling the mountains and float on the chicken soup. Among these "mountains" are the tricolor fish balls, which represent "pearls". The dish looks beautiful and tastes tender, and is well-known in the region for its distinctive appearance.

The dish of Sanyou Deity Chicken is characterized by its lustrous appearance and tender and soft taste, and is famous for the interesting legends related to its name.

Legends go that the dish got its name from Suxun, Sushi and Suzhe, the most prestigious poets of the Song Dynasty and visitors to the Sanyou Cave. Suxun accompanied his two sons-Sushi and Suzhe to Kaifeng (capital of Song Dynasty) to attend the imperial examination. As they arrived at Yichang, they were attracted by the breath-taking natural scenery of the three Gorges. So they stopped and took a short excursion to the area, which included a stay in the Sanyou Cave. They drank a lot of alcohol and eat the chicken they brought with in the cave. Afterward, people renamed the chicken preparation once eat by Suxun and his two sons as Sanyou Deity Chicken to memorize these three great poets.

Basha Fat fish is the moat famous fish preparation of Yichang. It is made by steaming the fish with fat pork. The fish is fresh, tender and the soup tastes light.

Except for the local specialties, food from other part of the country is available in Yichang, such as the hot pots of Chongqing, Roasted Whole Lamb and Braised Chicken with Potato and Green Pepper of Xinjiang.

Yichang's snack is as rich as the local dish in variety and taste. The most popular local snack is the Cool Shrimp(Leng Xia).

The Cool Shrimp, however, is not really shrimp at all. It is actually made of rice milk and red sugar. It is so named because it resembles shrimp in shape. Eating Cool Shrimp is believed to keep you cool in summer, therefore, the snack is considered to be the best summer snack in Yichang.