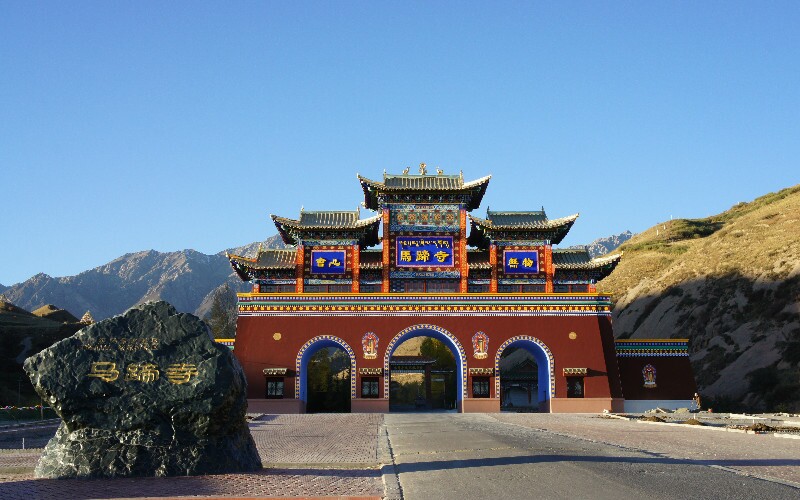 Shengrong Temple was listed in 1981 as a cultural relic under provincial protection.
The Temple is delicate in construction, gorgeous in coulors and elegant in style. The Buddhist figures and clouds on the slant and the flat surface are as exact as life ones. They are of high historical and artistic value.

Mati Temple grotto is located in the Gu Minority Autonomous County in Su'nan, about 65 kilometers to the Zhangye City in the north. The road situation is good for self-drive tourism from North Zhangye to Su'nan. Though the distance is only about 70 kilometers, the trip will take more than one hour due to the steep road. Public buses to Su'nan are also available in the Nanguan Long-distance Bus Station of Zhangye. After arrival at Su'nan, a tourist can take a taxi to Mati Temple.

According to the legend, a horse from the heaven once left a mark of horse hooves here, and thus the temple got its name. The legendary print of the horse hooves now exsits in the Mati Hall in Puguang Temple, serving as an indispensable treasure of the temple.

The uniqueness of Mati Temple Grotto lies in the grand scale of budhist towers, caves and shrines in Qianfo Cave, with a total number of more than 500; the larg-scale sculpture of Apsaras in Jinta Temple is of primitive simplicity and elegance, which is unque in China; the Thirty-three-heavens Cave in Puguang Tempple has a total of 21 grottoes ranked in 5 levels. These grottoes are arranged in the form of a pagoda, with Buddhist halls inside and corridors outside.

The total number of caves and shrines both inside and outside is up to 49, all of which are of unique designs. The surroundings of Mati Temple are very beautiful, and the verdant hills, green waters, unusal peaks and peculiar caves are the most famous things of Mati Temple. Tourist can also stay in the tent of Yugu Minority, enjoying the pure chang and the delicious big chunks of stewed lamb and experiencing the unique living style and the cultural characteristics of the nomadic people.