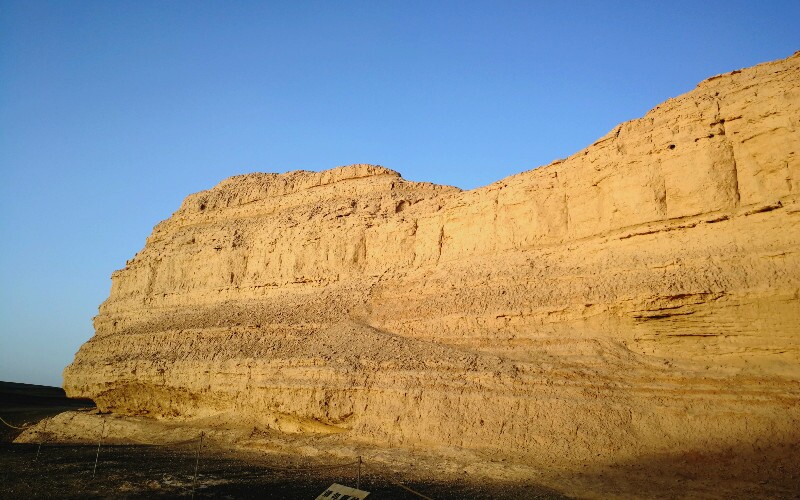 An ancient cultural site of the New Stone Age and a cultural relic under provincial protection. There is Tombs Complex of Han Dynasty in the site which covers about 4 square kilometers.

The site of Black Water State and Tombs Complex of Han Dynasty is about 15km long from south to north and 10km wide from east to west. The Tombs Complex covers about 4 square kilometers, and most of them have been buried by the desert, while the ones that still remain were mostly resurrected before the liberation of China. In 1956, the National Geological Prospect Team confirmed that there was an ancient city beneath the site, in which the Huns had ever been living before the era of West Han Dynasty. They delimited the place as the national capital of the small Yueshi State. The state got its name "Black Water State "because of the fact that native people usually called the Hans "Black Huns". According to the Dushi General Book quoted in the Medical Book of All States and Counties under the Heaven, this land belonged to the ancient city of Zhangye in Han Dynasty. The record of Ganzhou Fu says that this place was called Gongbi Yi (post) in Tang Dynasty, Xicheng Yi (West City Post) in Yuan Dynasty and Xiaoshahe Yi (Little Sand Water Post) in Ming Dynasty. Native people called it "Old Ganzhou" or "Black Water State". The Raoxin Record Course holds a record that in Sui Dynasty, Han Shilong, who was appointed to defend the Black Water State, quartered here and built up four ramparts which were buried under sand blown by wind only one day after they left. There are two age-old castles on the southern and northern sides of the Han Tombs Complex. They are of the same structure with square planes.

On the northern and southern sides of the Tombs Complex, there is a ruin of ancient castle each. These two castles are identical in shape, being a square in surface. The castle in the south is 248 meters in length and 222 meters in width. There is a door in the middle of the east side of the castle, and an urn city was built on that. The door is 7 meters in width, with a 4.6-meter-thick wall and a 0.15-meter-deep rammed earth level. Though all the buildings in the castle disappeared completely, bricks and ceramic chips as well as mills can still be found on the ground. The castle in the north, which is 245 meters in length and 220 meters in width, is about 1 kilometer away from the south one. The door is on the north side of the castle, with a width of 4 meters. On the south-west side of the castle there is an earth altar, which is squar in shape with a length of 7.5 meters of each side. The north castel has already been covered by quicksand. The ruins of the Black Water State have been destroyed not only by wind and sand, but also by human beings.